BN Hot Topic: Is it Freedom of Sexual Expression or Dangerous Use of Social Media? 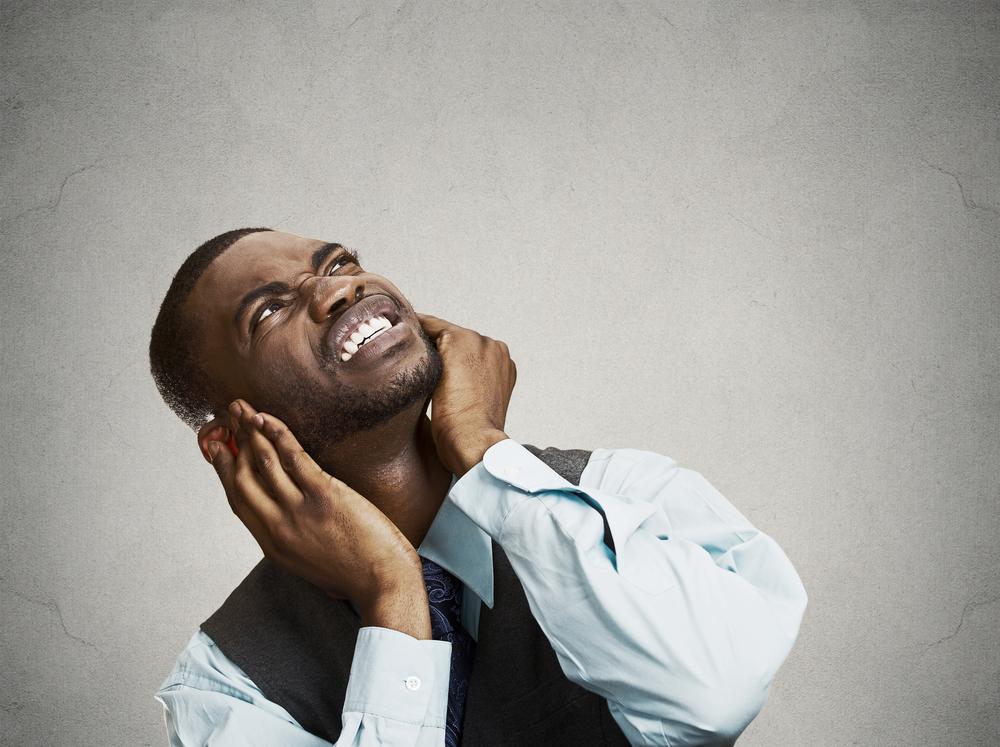 Recently, videos of women twerking and exposing their genitals on Slimcase’s IG live went viral and people have had so much to say about it.

We live in a world where we preach self-love and encourage people to do whatever they want to do, as long as they are not causing any harm. But should women twerk and expose their private parts online – where thousands and even millions of people can easily see them and save these photos/videos on their phones?

Radio personality, Tolu ‘Toolz’ Oniru-Demuren is of the opinion that ladies need to be careful with twerking on IG live because they never know who is recording and holding on to the footage. She said: “Just imagine, we’re a decade in the future, great opportunities are coming to you, and someone pulls out footage of you twerking on IG live pouring milk on yourself. It’s sad because historically, women tend to lose out more in these situations. As an adult, you can legally do whatever you want to do. Hell, you can have a full gynae exam on IG live if they don’t shut you down. Just be prepared for the consequences.” 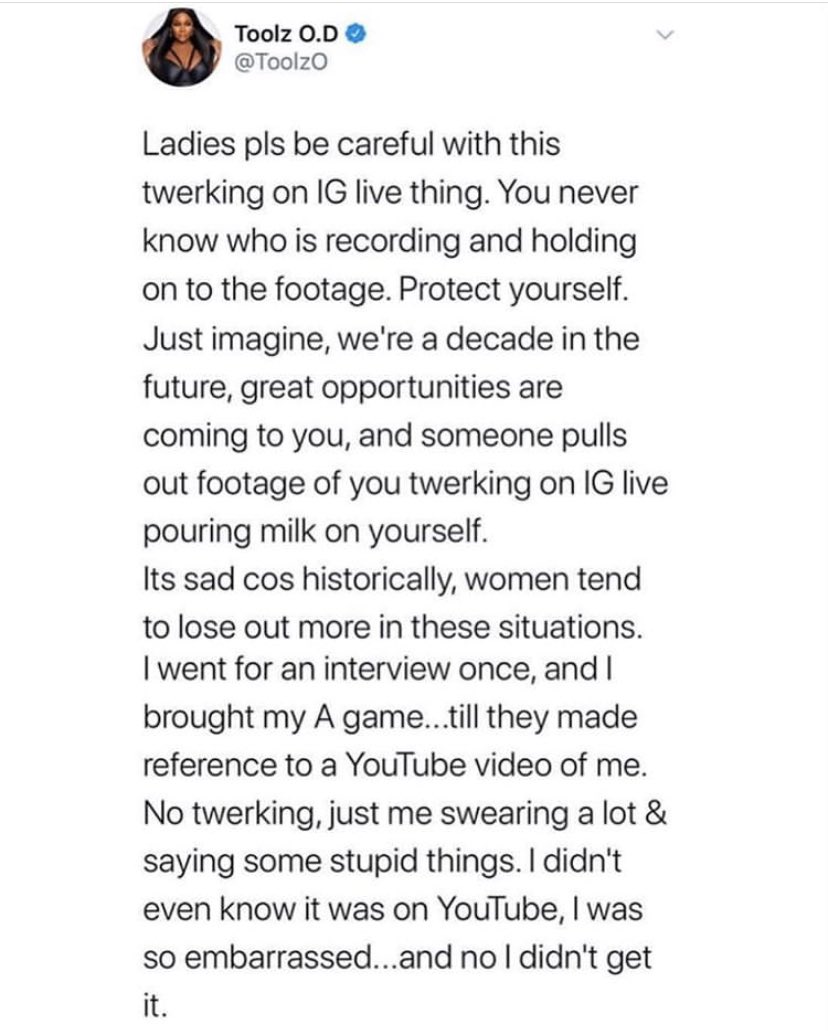 For these women, they are just having fun and no one is being harmed by their actions. But where do you draw the line? There’s freedom of choice and expression, but are you ready to face the consequences that come after?

Dr. Ola Brown said that “…the same men hailing you for your twerking video will be the first to bring it up as a reason why you shouldn’t be nominated as CBN governor.”

Ireti Doyle said: “In the coming years, many will wonder why they can’t catch a break… they will blame it on village pple and “haters”. Alas, the demon will be in the digital footprint. The world is literally at your fingertips… be mindful of what you’re putting out there.” 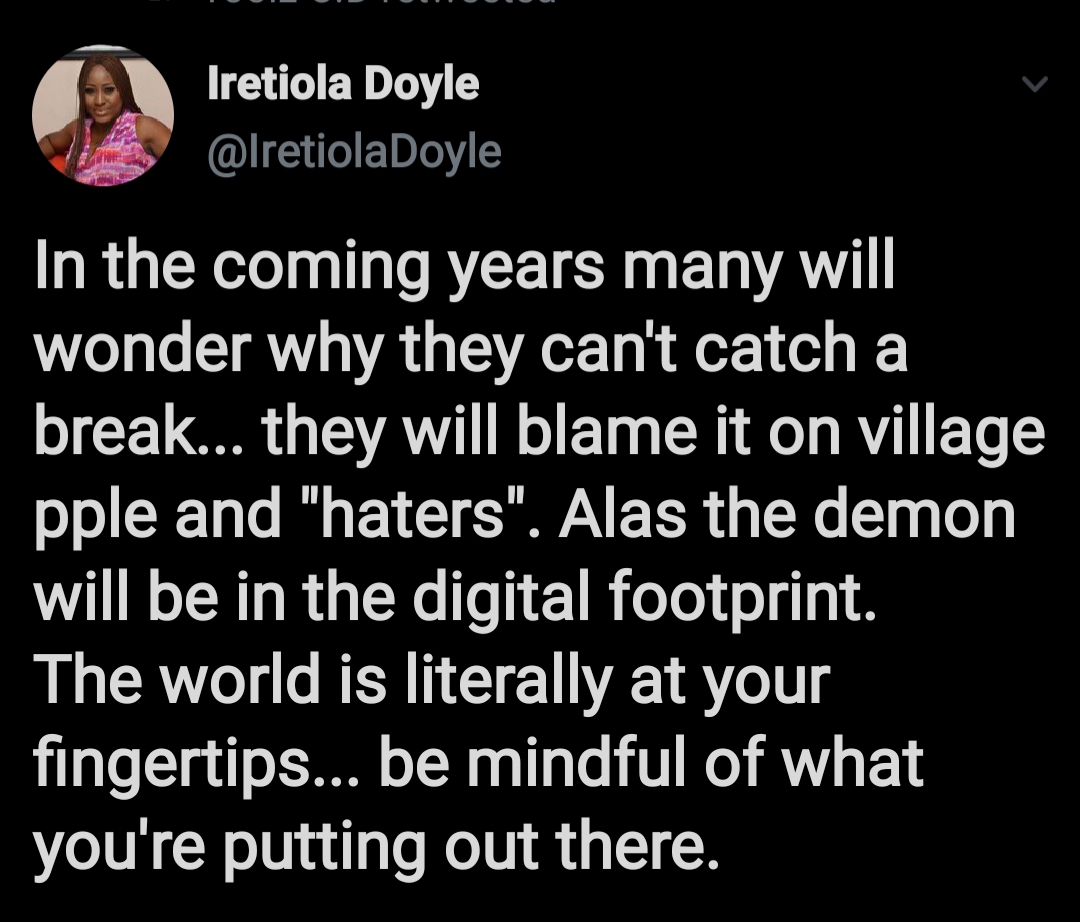 We also live in a world where representation matters a lot. Many women have been stunted, career-wise, because as young girls, they did not really have women in positions they aspired to be in. Although these ‘twerkers’ have not set out to be anyone’s role model, will their actions encourage little girls to participate in things like this in future? Will it encourage the objectification of women?

If men were to participate in things like this – which they already are, by the way – will it affect them as much as it will affect a woman?

There have been many cases of people losing out on big gigs or life-changing opportunities because of their parts videos, photos or words.  Kevin Hart had to step down from hosting the Oscars because of the homophobic tweets he made years ago.

Basketmouth was also dropped as an ambassador to sex and gender-based violence over a joke he made about rape.

On the other hand, Elisha Abbo, who physically assaulted a woman and was caught on camera is still a senator and he was never prosecuted.

Come to think of it, what if behind the scenes, some of these women are being cajoled or forced by pimps to participate so they can win the cash prize attached to it? We may never know, right?

Actions have consequences. Toolz shared her interview experience and how a past YouTube video stopped her from getting a job. 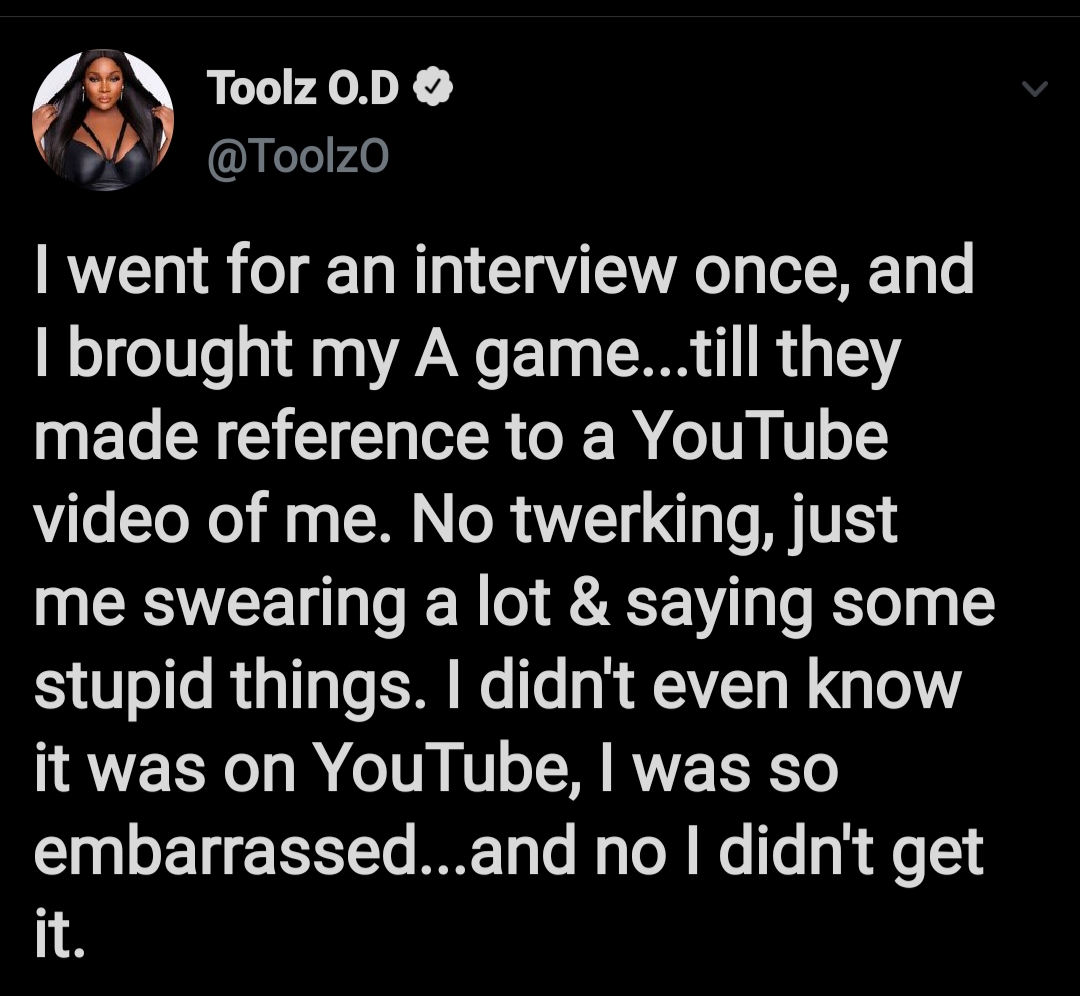 So, guys, what do you think?

‘Funmilola Sanya: The Lord Said I Should Tell You

These BellaNaijarians Share Their Experiences Being Raised by Their Grandparents