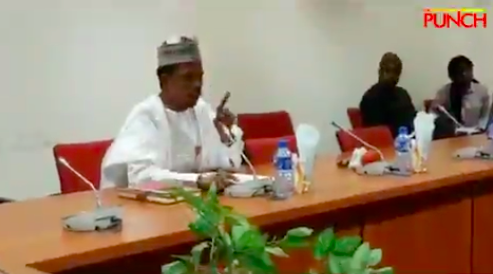 Senator Elisha Abbo, who was caught on camera slapping a woman at an adult toy shop got into a heated argument with Senator Remi Tinubu, a member of the ad hoc committee set up to investigate the assault.

Tinubu had told Abbo that he cannot dictate the procedures the committee is supposed to adopt, saying: “Do you want us to protect you, or do you want us to defend you, or you want to be on your own?”

“Off that mic and let me finish,” Tinubu said, adding: “Do you realise that the Senate when we constitute this, whatever the law gives, we can also suspend you.”

Tinubu continued: “Off that mic, you’re digging a hole for yourself. I’m also another woman”

Abbo was arraigned at an FCT Magistrate Court on Monday and he pleaded not guilty to the one count charge of assault. He was then granted N5m bail.