BN Book Review: The Girl With The Louding Voice by Abi Dare | Review by Oluwadunsin Deinde-Sanya 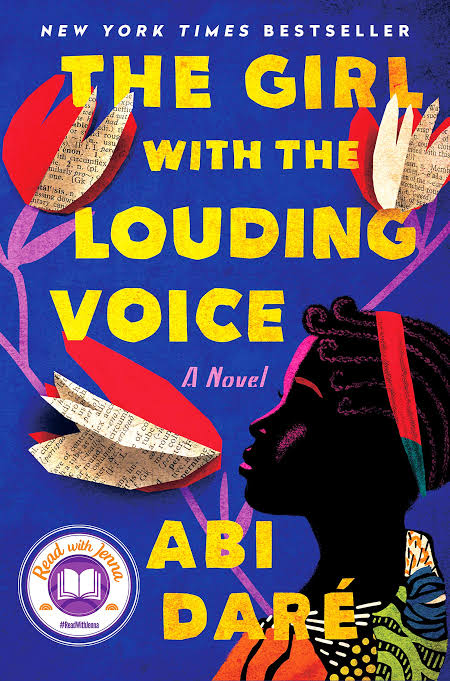 When Adunni’s mother died and her father broke the promise he made to his late wife not to marry her off to any man until she completes her education, Adunni’s life took a drastic turn.

Barely few months after the death of her mother, Adunni, aged 15, found herself being married off to Morufu, an old taxi-driver who already had 2 wives and 4 children, because her father needed money to pay community rent and pay off some debt. Adunni’s dream of going to school and becoming a teacher in future crashed when she found herself being bundled to Morufu’s house to be the third wife.

Everything took a drastic turn, in chapter 15, when one of the wives died in Adunni’s arm.

Sometimes, we know what we need to do to make our lives a little better. But the fear of the future and the uncertainty of tomorrow keeps us glued to our present spot. It now requires a certain ‘force’ to jerk our knees, put a spring in our feet and push us forward. For Adunni, that was the force she needed. The clue that she had to run away from Ikati village to avoid being killed and then find a way to survive in this harsh world. From the beginning of chapter 22, Adunni’s life moved in a totally different direction…

Abi Dare‘s The Girl With The Louding Voice is a story of hope and optimism – a reminder that there’s always a shining light at the end of the tunnel. The book also addresses some critical issues that we still need to talk about.

Child-bride and Violence Against Women

Abi Dare did not waste time in bringing to light many issues women face in our society. In Ikati village, the girls were married off between the ages of 13-15 to men way older than them.

These men already had wives and children and the young girls were forced to become second or third wives. These girls were married off in exchange for money, food and clothing. Although the young girls were brainwashed into thinking that they ought to be married by the age of 15 and that marriage was the pride of a woman, one cannot fail to observe that this marital arrangement favoured the women in absolutely no way. Marrying off their daughters was just the father’s way of making more money.

For instance, in chapter 7, Morufu can be found saying to Adunni “I have already find Kike a husband. I will use her brideprice to repair my car window…” That is how low and cheap a girl-child is viewed.

Women were also heavily relegated in the book and the boy-child was worth more than the girl-child. One cannot fail to notice this, especially when Morufu said: “Khadija is carrying a new baby. I have warned her that if it is not a boy-child inside that stomach, her family will not collect food from me again. I swear I will kick her back to her hungry father’s house…”

When Morufu was talking about Kike, his first daughter, he also said: “Girls are only good for marriage, cooking food, and bedroom work…”

The Girl With The Louding Voice also highlights domestic violence and how, in most cases, women are at the receiving end. When Adunni’s father was handing her over to Morufu, he said: “This is your wife now, from today till forever, she is your own. Do her anyhow you want. Use her till she is useless…”

Truly, Morufu used her until she was almost useless. Morufu also advised Adunni to report to him if the first wife gave her any problems, so he could discipline her. He said: “If Labake do you anyhow, talk to you one kind, call me and I will flog her very well”. One wouldn’t be wrong if we call Morufu the grand patron of misogyny.

Diction
Abi Dare’s use of words is different from what an average reader is used to. After reading the first few lines, one would wonder if the author could speak good English. But along the line, it was easy for the reader to ease into the style of narration. Talking from the P.O.V of Adunni – an uneducated girl who spoke very bad English – it was very easy for the reader to wear the shoes of Adunni, have a glimpse into how her mind works and speak through her mouth. Phrases like “the cold is colding me”, “outside, the moon is red, hanging too low the sky, be as if God pluck out His angry eye and throw it in our compound”, “the sun is a shining hot plate in the sky, resting itself among balls of white cotton wool” did not just make the book fun to read, it also kept the readers engrossed.

From chapter 1-19, Adunni was that girl who was willing to take life as it came. But from chapter 20, she had to grow up, make a life-changing decision and take charge of her fate.

Ms Tia’s character is proof that being rich does not exempt a woman from being subjected to certain demeaning acts and stereotypes. This is reflected when her mother-in-law accused her of being barren and took her to see the prophet for cleansing. This cleansing included her getting whipped until her whole body was swollen and bloody. The irony of it all is that Ms Tia’s husband, Ken, was the one who was infertile.

Big Madam, Adunni’s cruel boss, is a perfect representation of Lagos oga madams who desperately want to hold on to their marriage. So they sacrifice their house-maids by looking away or blaming them when they get sexually assaulted by their husbands.

Abi Dare clearly has a good sense of humour and it is reflected in her use of irony. For instance, Kike, Morufu’s first daughter, who’s the same age with Adunni, was forced to marry Baba Ogun, a man who sells medicine for sick people in his village. For a medicine-seller, it is ironical that his first wife died coughing blood.

Her use of personification is also commendable. In her book, Abi Dare gave life to inanimate objects. It was as if the sun, moon and wind felt the pain Adunni faced throughout. “I daze, the sun daze too” – this was after Adunni received a resounding slap from Big Madam when she was caught singing while working.

Although The Girl With The Louding Voice is an amazing book, I couldn’t help but wish that the book had gone further – beyond Adunni getting the scholarship – and had a better ending.

For me, her turning point started with Khadija’s death and knowing the outcome of that scenario would have given the reader a level of closure.

Was Bamidele ever found? Was Adunni’s father arrested or killed since he couldn’t produce his daughter, Adunni? What was Morufu’s reaction when he discovered that he had ‘lost’ two wives in one day? Did he collect all the ‘moneys’ and bride-price he had spent on Adunni – now that she had run away – from her father?

The inability of Abi Dare to give light to these questions has left a certain void that may never be filled. For some of us, the book did not do enough to quench our burning curiosity. What eventually happened?

Overall, The Girl With The Louding Voice was a good read to me, because it highlighted almost everything that is wrong with our society. It is also a story of hope, determination and freedom. But although the beginning was awesome, the ending was unsatisfactory – one I might not recover from.

BN Prose: Many Colours of Rainbow by Nneamaka Onochie