BN Prose: Many Colours of Rainbow by Nneamaka Onochie 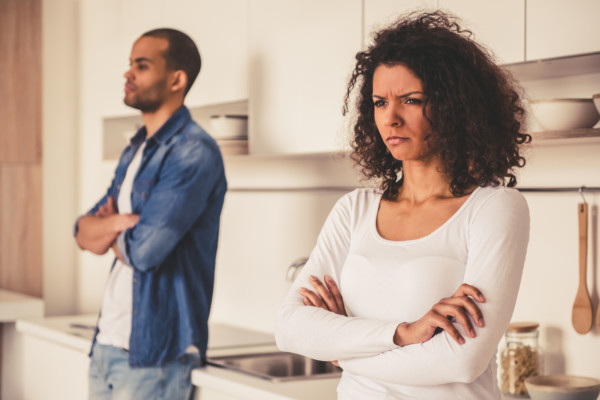 The presenter deliberated on economic crisis and residual income tax returns with her male colleague; she argued intelligently as someone who had ample knowledge about the topic. She had a British accent and gesticulated as she spoke. Her well-manicured nails were polished bright red and it suited her long slim fingers.

You watched her lips form many words, occasionally distracted by the red lipstick which gave her a chic sophisticated look. The light-skinned presenter was pretty and seemed to have it together and you wondered what her life seemed like – juggling between her career and home must be grueling. You knew something was amiss in your life, although you shoved the thought to the back of your mind.

You stood from the couch and walked to the dining, the driver had gone to pick your kids, Chisimdi and Chizara, from school. You had finished making the onugbo and pounded yam, just like Emeka instructed. He likes his food fresh so you went to the market and made food everyday. He said he doesn’t want a house-help making his food so you never had a help.

You watched the flower base at the center of the dining. The yellow tulip was Emeka’s anniversary gift to you. You plucked out one tulip bulb and examined it with feigned concentration and began yanking it off. It’s sickening to let go when clinging to a dead dream. Your MBA and MSC certificates lay somberly at the bottom of your box. Your career in financial sector sailed fast until you got married and you gave up your dreams to fan the embers of Emeka’s own. You were happy – or you thought you were. Most times, you stare at the mirror trying to recognize the image staring back at you.

You heard the security man open the gate; your kids were back from school. They rushed to you and hugged you in ecstasy like they had not seen you in a while, you held them firm in embrace and remembered the many colours of rainbow and how these little ones were the detailed part of your existence.

Their lesson teacher came to teach them and you decided to sort out the laundry. That was where you saw the receipt in his pocket. It detailed the payment of an iPhone7 three weeks ago from Osborne Phones and Accessories. You were still using the Samsung he bought you two years ago and he also used Samsung. You put the receipt back where you found it and sorted out the rest of the laundry.

The children were already asleep when he came back in the night, you ran his bath. When you brought his dinner, he said he wasn’t hungry and you resisted every urge to nag. Your mother had said that nagging makes a woman look crazy, desperate and unfortunate. Here was a hard-working man toiling to put food on your table and the least you could do was to be grateful. That night, while he took his bath, you entered the bathroom, took the sponge and scrubbed his back gently. Then you gently turned him to face you as you scrubbed his broad shoulders and wide arms, tracing every biceps with your hands. You knelt down and took him in your mouth and moans escaped his mouth.

That night, you cuddled him as he slept. It did not matter if he bought an iPhone7 that never reached home three weeks ago, or if he didn’t eat dinner at home. All that mattered was that he was in your bed lying beside you. You had defined happiness as living each day with gratitude.

It was almost summer and travel plans had been made; once the kids finished their exams, you would travel with them to America for holidays while Emeka stayed back to work. It was your best time of the year. You bought moisturizers to aid the sheen of your supple light complexion and called Nkoli the hairdresser for home service.

Nkoli was ushered into the garden where she braided your hair into tiny twists with golden coloured hair extension. She also trimmed your brows and fixed your nails. You told her to polish it bright red because you wanted it to look like that of the presenter you saw on TV. Satisfied with her work, you paid her do generously that her eyes shone with excitement.

You called Emeka and asked him what he would have for dinner, he said scrambled eggs and plantain. That night, as he ate his dinner, you ran his shower and made sure the water was warm. While he took his bath, his phone rang and you checked the phone to know who the caller was, the screen showed ‘Oil Well’. You wondered who your husband saved his number as Oil Well – perhaps a colleague or a client. Then a message entered his phone and curiosity got the best part of you. You opened the message and it read “baby, I still feel you inside me. I can’t wait to have you all to myself.”

Your hands trembled and you felt dizzy as you carefully placed the phone on the table. While he slept that night, you watched him intently and his soft snores irritated you. Sleep was elusive and you tossed in the bed till morning.

“What do you mean you wouldn’t be traveling to America again for summer?” He asked, irritated.

“I said I won’t go again, I’m staying in Nigeria and I’m going back to work. I have already called Mr. Felix to fix me somewhere,” you said.

“And who is supposed to take care of the kids and run the house?” He thundered.

“You can resign from your job and take care of them” you replied dejectedly, looking at him with disdain.

He looked at you and knew your mind was already made up. He realized you had never spoken to him in that manner before.

When he came back that night, he was greeted by Cheta, the new house-help you employed.

“Meet Cheta, our new help, she will be living with us and doing all the chores” you said, daring him.

He looked into your blazing eyes and he chose his words carefully. “It’s okay,” he mumbled.

That night, Cheta served his food of left-over jollof rice and you didn’t run his bath.

BN Book Review: The Girl With The Louding Voice by Abi Dare | Review by Oluwadunsin Deinde-Sanya