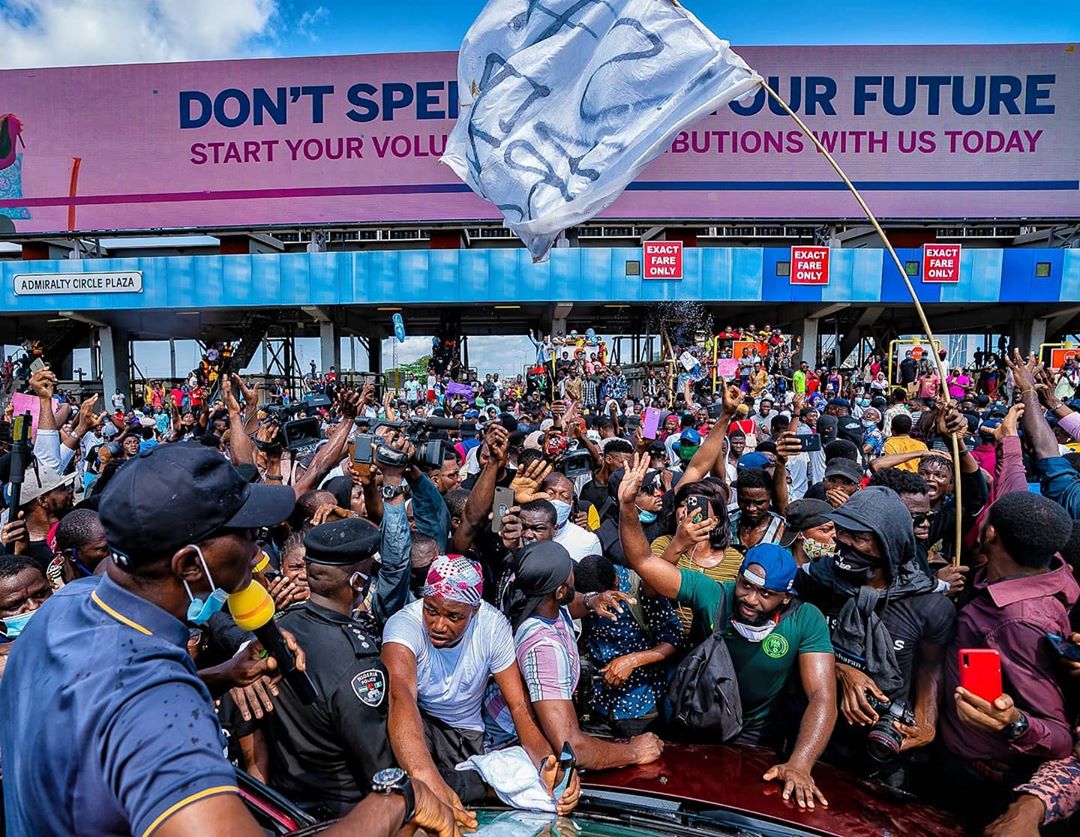 Really, it started with traditional media.

On the 10th of October, 2020, during the #EndSARS protest held at Ogbomoso, Oyo State, 20-year-old Jimoh Isiaq was shot and killed. Photos on social media showed the trajectory of things, how Jimoh coursed from an alive and idle bystander, to a young man with a gunshot wound fighting for his life, and, finally, to a body wrapped in white and lowered into the ground. And yet, when TV Continental news, also known as TVC news, reported it on television, here is what was aired: No shot was fired, nobody was killed.

Let’s take a look at another TVC television headline, while hundreds of protesters barricaded the Lekki Toll Gate: No Protest held at Lekki Toll Gate.

It’s not just TVC. Channels TV, too, have displayed some sleight in their use of headlines. See ‘They Are Shooting At Us,’ #EndSARS Protest Turns Violent In Surulere, for instance, in their reportage of the police shootings at the Surulere protests, where at least two were killed, including a police officer. The implication for anyone without information on the true event of things—everyone without social media, that is—will be that, perhaps, protesters have turned violent. Nothing is made clear; on purpose, perhaps, the reader is hoodwinked into making assumptions, believing the untrue.

A front-page headline by the daily newspaper The Authority: How Buhari, Osinbajo’s daughters brought SARS down. Curious, considering these daughters have been largely silent while Nigerian youths continue to leave their homes and protest en masse (name called were Zahra Buhari and Kiki Osinbajo, the former of which has said nothing about the protests on social media, and the latter with one post on Instagram). Curious, considering SARS haven’t been brought down.

Right—the police. These ones have been more blatant in their distortion of facts. In a now-deleted thread made on the Twitter by the official Nigeria Police Force account, @PoliceNG, then reiterated (and, days later, retracted) by the Lagos State’s Governor’s Chief Press Secretary Gboyega Akosile, about the shootings and deaths at the 12th of October Surulere protest: that protesters fired guns and killed one Ikechukwu Ilohamauzo. Ikechukwu, who died with his hands in his pockets, was an innocent bystander who lost his life after police officers shot into the crowd. No protester carried weapons. Thanks to social media, we know this is true.

See another false claim made by Gboyega Akosile: that his boss effected the release of the six protesters arrested and assaulted by the police in Surulere. More true is that on the night of Monday, 12th of October, Nigerian youths stayed glued to Twitter to get constant updates—from the calls made to the Lagos State Commissioner of Police, Hakeem Odumosu, to the arrival of state lawmaker Desmond Elliot, to the eventual release of the peaceful protesters, thanks to the Speaker of the House of Representatives, Femi Gbajabiamila.

More untruths from the police: them, according to Mochievous, the attorney taking complaints and coordinating lawyers to secure the release of unlawfully arrested peaceful protesters, denying that they have protesters in their custody. It happened with Treasure Nduka, who was beaten, and Ayinde Ayorinde, both of whom were, of course, discovered in police custody. Helpful in this regard has been the photos and videos shared on Twitter showing the arrest of these peaceful protesters happening in real time, which is why protesters are encouraged to take photo and video evidence of any altercation with the Nigeria Police Force.

On and on and on like that they go, traditional media, the police and the government saying one thing, and live photos and recordings by peaceful protesters showing another. We are asked not to trust our eyes. But thanks to Twitter, the truth is too glaring to disbelieve. Thanks to Twitter, the whole world can see.