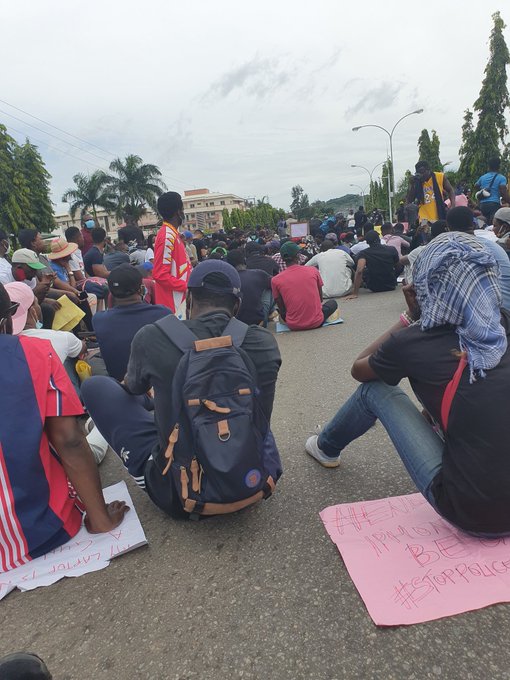 The 10th of October, 2020, was the first time I had ever joined a mass protest. It was important to me that I joined the hundreds of young people and add my voice to the #EndSars movement, because for me, it was a fight for our collective future. For years, I have worked on getting young people like myself to get rid of apathy and get involved in the business of running our country, and there was no way I would sit out the greatest awakening I had ever seen.

Dressed up in joggers, carrying snacks as the Twitter posts had recommended, along with scarfs in case the police tried to tear gas us while protesting peacefully, I headed out to my taxi.

My Taxify driver dropped a friend and I at Banex in Abuja from which we started our own long walk to freedom. It wasn’t just about ending SARS, but, as young people, showing our grievances against the long list of impunities that we suffer from. This was just the beginning of demanding better from the government.

I hadn’t eaten that morning but I found strength. I was surrounded by angry, passionate young people carrying placards and chanting #EndSARS. A bus attempted to hit a female protester and she angrily stood in front of him demanding he respect the movement.

This protest wasn’t about young people catching vibes; it was about us fighting to survive and stay alive. From a nation that has taken so much from us; it was now officially too much of a burden and time to take a stand or say nothing at all.

By midday the protest was still going peacefully as we arrived at the Unity Fountain where Aisha Yesufu and Omoyele Sowore were. My friends and I sat down on the grass and contemplated the next steps, and before we knew it, the entire group of people were marching towards the Police Headquarters where we would camp and make our final stand until the Inspector General of Police came to address us, or at least, we made some headway in our demands.

Under the hot sun, we sat. Making friends out of strangers and accepting the cold water and the KFC chicken people offered us. It’s funny how when placed in a common struggle, trivial things such as tribe and religion didn’t matter. What mattered was that we were all Nigerian and therefore we needed to take care of ourselves.

As we waited, we took pictures and created awareness on social media. It was soon evening and plans were being made for other amenities such as tents to keep the protesters overnight. A small dance party was happening nearby as I sat with my friends and watched. As we stood up to take a walk, we heard commotion behind us.

A quick look back showed a rushing avalanche of human beings as the police force, who were supposed to be our protectors, started shooting tear gas at us. It was run or be trampled, possibly killed. We ran. I ran. I usually think that I can’t run to save my life but apparently that was a false thought. They also started shooting at us, chased us to the express. It was dehumanizing. Seeing young people upon whom the promise of the nation lay being chased and endangered like common thieves.

In the middle of the ruckus, my bag fell off my body, but luckily someone snatched it from the ground and handed it to me as she raced by.

Everything was a blur. They slit tyres, manhandled protesters and in a democratic nation, exhibited a level of violence never to be seen.

I had never been a victim of police brutality before this, but as I experienced it, my chest burned with rage at the inhumane treatment many young Nigerians had experienced at the hand of this rogue unit of the police force. This rage is what motivates me to put out this piece. To be heard. To speak out. To implore you to join us and say #ENDSARS. It hurts in ways that words can’t efficiently express, maybe just tears.

Anyone of us could have died yesterday night, and we would have become just another face, another name, another statistic of police brutality in Nigeria while a violent officer goes home to his children.

Jimoh Isiaq was shot dead yesterday during the #EndSARS protest in Ogbomosho. As I write this, more protesters are currently being arrested, tear gassed and flogged in the nation’s capital. How do our leaders sleep at night knowing that their people are being slaughtered, robbed and killed at will?

Anyone could be a victim of police brutality. It just takes being at the wrong place at the wrong time. This fight is for all of us and we must win it.

The Audacity of Police Brutality at a Peaceful #EndPoliceBrutality Protest