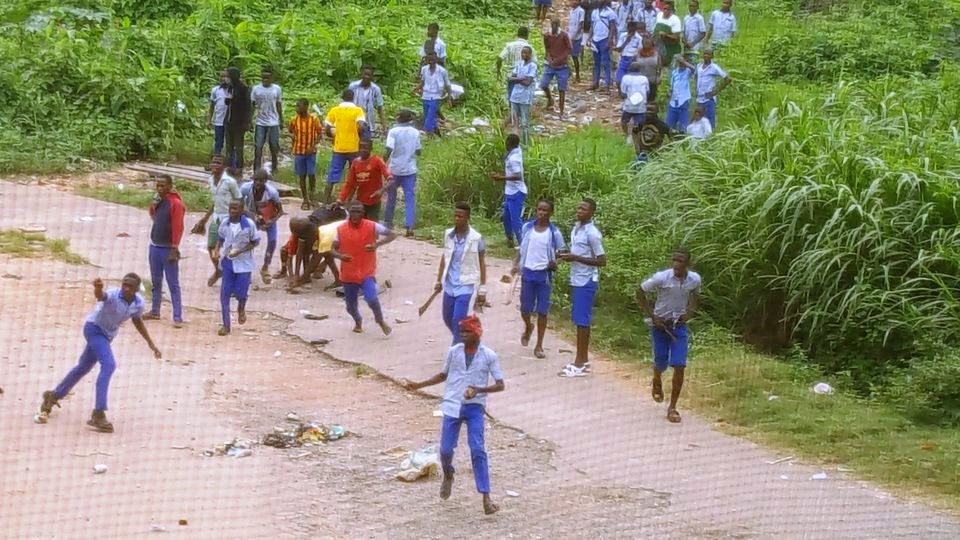 I worry about my students. This is not my first time teaching; I have taught in private schools and worked as a lesson teacher for parents who wanted more for their children. But now I am a corps member posted to a public school in Ibadan, and these students are the first set I am teaching in a public school, and I worry about them.

When I received my posting in December 2019, I Googled the school and found news reports claiming the students often got into fights that involved cutlasses and gangs. I was surprised, the kind that’s bricked by fear, so you make jokes to chip at it. Imagine me, baby boy me, planning to enjoy NYSC year, then getting posted to a school filled with Indaboskis. Why then did I redeploy from Borno State in the first place?

But I showed up: ill-fitting khaki donned, facecap at a jaunty angle on my head, school bag strapped to my back like a sleeping child. I had no full-length mirror to gauge my appearance, but clearly I could see myself. Look at me straight out of an old Nollywood movie, the archetypal village kopa; all that remained were the lines, a long pankere.

The staff was a mix of corps members and older staff, the former in narrow skirts and gleaming belt buckles, the latter dressed as you would expect civil servants: gowns from Christian Women Mirror and loose trousers fifty sizes too big, ties like cutlasses. After I was introduced, one of the women pulled me aside and said in Yoruba, “Be careful with those students. Anyone who refuses to listen to you, leave them alone. Just teach your own and go. Don’t let them come after you with a cutlass or gang up to beat you after school.”

But then I entered the class and saw them: 12-, 13- 14- and 15-year-olds with tiny gorimapa heads and skinny legs. For the tiniest of seconds, I was thrown off balance. Imagine being prepped for war only to get to the war front to encounter toddlers in diapers. I felt the disappointment I imagined those Biblical characters must have felt when they encountered choristers on the battlefield, not fellow warriors. Were these the ones who would chase me with cutlasses? These ones? With their shirts wrongly buttoned, shorts patched in some places, or left with gaping holes in other places? In their uniform of blue shorts and white shirts with blue stripes like Baba Blue’s children. It was like a joke. I enjoyed, for the first few weeks, entering their classes and screaming, “How many times have I told you to stop making noise? All of you, stand up now, raise up your hands and close your eyes.”

My worry creeped up on me. One week I was teaching them prose, poetry and drama, asking them to spell accommodation, teaching them how to greet, and the next week I realised how very undereducated they were, unprepared, to go head to head with students from standard schools, and how oblivious they were of their gross illiteracy.

And yet, in a few months, they would sit for the Junior WAEC exams as JSS 3 students and be promoted to SSS 1 where, ultimately, they would constitute a source of headache for the new teacher.

I knew I could not let that happen. I had attended a university, witnessed how unkind, impatient and dismissive the world could be to people who did not know much, and I needed to rescue them from this. I had been taught by teachers, moulded into who I was by people who did not give up on me, and I felt responsible for these ones.

I became exacting. I demanded that notes be complete, punished anyone who spoke Yoruba while class was in session. It was an English class, and by God, they would learn English. I smacked them for not using paragraphs, for forcing capital and small letters into an arranged marriage. While teaching, I would suddenly stop and say, “Spell original,” and listen to them stumble their way through it or get it correct. We were making progress. Slow, yes, but something was happening.

But then the coronavirus happened. We went on a break that lasted six months, and when schools were allowed to resume in late September, I returned to find that the students were all gone, replaced by a different set.

I felt anew the disappointment I felt when I first resumed. This new set stared at me, wondering, I suppose, who I was and where I had crawled out from. I stared at them too, all my willpower gone, wondering where to start from and how much I could teach these ones when I would be leaving in October.

Their first exercise was for them to write a composition about themselves. A test of their writing ability, to which I got my answer when one asked if she could write a list.

I took a piece of chalk, wrote on the board: My name is Kunle. I am a student of…

“That’s how you should write it,” I said. “Write it in an essay format. Don’t make lists.”

I could tell you stories – the students I smacked on the back for doing the same thing I corrected; the ones I told to cancel everything and start all over; the ones whose handwriting I praised. I could tell you about what I saw when they submitted their notes:

I am light in comprehension.
I am fiveteen yes old.
My hubby is to reading.

Instead, I’ll say nothing.

Really though, all these are minor, only a tiny percentage of what came that day. The greatest of them all? The two or more students whose names were not Kunle, but who submitted essays that began with: My name is Kunle. I am a student of…

It is early October. My business with NYSC will soon be complete. I will be gone from these students. There will be no contact between us, no morning classes from me. A new teacher will replace me, and soon, I will be wiped off their minds, only remembered once in a while or not at all. But I want to give them something to remember, an anchor of sorts, a beam of light that will show them all the things they have the chances of becoming. I want them to meet me one day, 10, 20, 30 years from now, and even though we have nothing to say to each other, I want them to light up with joy and say just one thing: “Thank you.”

But POP is a few weeks away. Just how much can you teach? How many things can you fix in such a short period of time?

Burna Boy May Have Shrugged Off the Responsibility, but Other Nigerian Celebrities Are Stepping Up