Over the next couple of weeks, BellaNaija will be partnering with Farafina Books, an imprint of Kachifo Limited, to publish excerpts of titles coming between October and November. The first of them is Kukogho Iruesiri Samson‘s “Devil’s Pawn,” a winner of the GTBank Dusty Manuscript Prize. It is out in stores from October 15. Enjoy the excerpt. 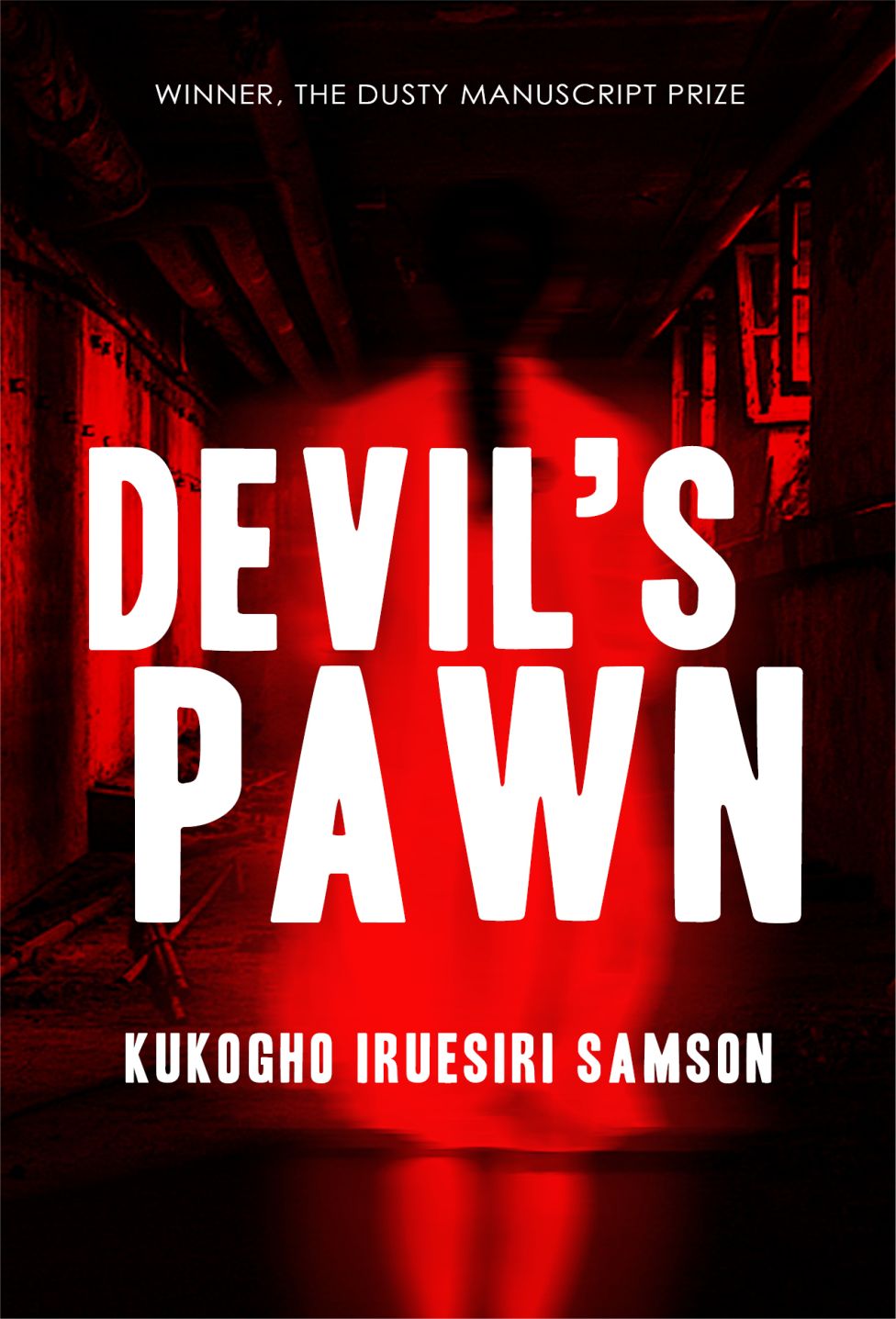 Just before daybreak, a hooded man climbed the stairs to the topmost floor of a building in Sunshine Lodge, a private block of rooms for students, ten minutes away from the university.

The hooded man stopped at the first door after the stairs, dropped a tree branch in front of it and knocked loudly on the door before hurrying away.

The door opened a minute later and a guy’s head appeared. He looked around and, finding no one, stepped into the lighted hallway. He had a large towel around his waist and his body glistened. His name was Simon Tyough, a second-year mechanical engineering student. He was tall and slightly buff, with a few strands of hair on his chin.

He picked up the branch at his feet. It was from a mango tree. He counted the leaves on it: nine. His heart sank. It was a message from the Black Cats: someone was about to die. That the branch turned up at his door meant he was going to be a part of the operation and had to meet with the other Cats that evening at 9 p.m. The last time a message like this was passed around, two people were killed, a student and his girlfriend who was just unfortunate to be at her boyfriend’s place when the Cats came for him.

The rest of the day breezed past. Simon could not concentrate on his lectures, and each time he remembered the message that had been left at his door, his heart stopped. It was four months since he joined the Black Cats. This would be his first time going with them on a mission.

As soon as PHY 203 evening tutorials ended, Ese hugged her bag close to her chest and left the lecture hall. There was another tutorial fixed for thirty minutes later, but Ese felt too ill to stay for it. She was weak and her head throbbed. She felt dizzy as she approached the steps of the lecture theatre. Her phone rang, but she did not pick it. With each step, her legs felt weighed down by iron shackles. She could make out several paired figures in the shadows as she walked through the faculty buildings. She didn’t really care that they were there; she simply noticed them. Two of such figures sat on one of the concrete chairs, kissing.

Ese stopped walking and closed her eyes. When she reopened them, she realised she was right at the spot where she had slapped Emeka in the face the first time he tried to toast her. Most guys would stop pestering her after a slap, but not Emeka. Apparently, he was so used to getting his way that he had tugged at her shoulder when she made to get away from him. So she slapped him. She apologised immediately, but Emeka did not seem to have heard her. Although he walked away quietly, the look in his eyes had chilled her.

She crossed onto the walkway behind Queen Hauwa Hall. The walkway, which spanned the entire length of the hostel building, was roughly two hundred metres of red and grey interlocking pavers. Part of the sick bay was visible from where Ese stood. To get to her own hostel, she would have to walk to the end of the walkway and cross to the side of the road where the sick bay was. From there, it was a straight walk to the gate. She quickened her pace, ignoring the pain in her skull.

Queen Hauwa Hall was notorious for poor hygiene; too many students lived in it. The hall was meant for first- and second-year students like Ese, but, like many students, Ese resided in Alexander Hall, which had smaller rooms half the size of Hauwa Hall, but was better serviced and less crowded.

That night, however, Ese wished she resided at Hauwa Hall; it was closer. She stood at the end of the walkway, waited briefly for a car to pass, then ran across the road. The effort mixed another cocktail of pain in her head.

The sick bay was open. Ese could see a few students waiting inside. She thought of going in for treatment, then remembered she had some Panadol in her room and kept walking towards her hall. It loomed in the distance and towered above the Social Centre opposite it.

The four of them – Kunle, Dave, Oche and Simon – sat huddled together under the shadows of one of the umbrella trees scattered around the campus, passing around a wrap of marijuana. Simon declined the joint when it was passed to him. He sat with his hands in the pocket of his hoodie.

“Simon, relax,” Dave said, slipping on a pair of gloves.

Simon nodded gratefully, even though Dave’s words had zero calming effect on him. He had only begun smoking when he joined the Black Cats. He hated the way it dried the inside of his mouth – a far cry from the kick he had gotten when he first tasted vodka.

Tonight, his fear was a stranglehold around his neck and his heartbeat was amplified in his ears. Before today, he hadn’t been involved in the cult’s dirty business. He had hoped his novice days would last forever, that this day would never come. But here he was, about to participate in punishing a girl for an unnamed offence against Emeka.

He wanted no part in this. He was from a Christian home and, though he had not been consistent with church since his parents died, he still read his Bible. He didn’t have the nerve for violence. He had been forced into this, abducted by most of the guys here, after days of evading them, and beaten into submission.

“Action at last,” Kunle said, a fresh joint between his lips. Though small-statured, he was the loudest of the gang. Dave snatched the joint from Kunle’s lips. He handed it to Oche who sat between Simon and him. Oche was Emeka’s cousin and a typically quiet guy. He puffed on the joint and slowly let the smoke out of his lips. He passed the joint back to Dave. “That’s her coming,” Kunle said.

Simon shuddered. It was only a few hours ago that he had learnt their target’s identity. Emeka, whom he had met only twice since becoming a Cat, had spat her name: Ese. She seemed like a quiet girl; she didn’t deserve the attention she was getting from the Black Cats. But Emeka’s orders were final. He’d sounded really bitter an hour ago as he repeated his instructions and dropped the guys off near the Social Centre. He was waiting nearby with the car, ready to pick them up as soon as they picked up the girl. Simon wondered why Emeka was participating in the abduction. He could have asked Skulls to oversee this.

Simon looked up. Ese was walking slowly, as though there was something wrong with her. She stopped and held her head in her hand. Simon willed her to keep going, make a dash for her hostel before they grabbed her.

Kunle jabbed Simon in the ribs with his elbow. He knew what this meant. He brought out the vial of chloroform in his pocket and emptied its contents into Dave’s gloved hand.

Kukogho Iruesiri Samson is an award-winning author of 4 books “What Can Words Do? I Said These Words,” “Words of Eros & We Who Sowed Hurt” and “Beaded Pains,” all of which are available on OkadaBooks. He is also the founder/CEO of popular educational and publishing firm, Words Rhymes & Rhythm Publishers Ltd.

“Devil’s Pawn” won the GTBank Dusty Manuscript Prize in 2018 and will be available at farafinabooks.com from October 15. But the eerie cover, gripping blurb and riveting excerpt has you wanting to pre-order, right?

Your Better Self with Akanna: 3 Signs You’re Living A Fake Life