Sylvester Oromoni Jr.‘s family marked his 12th birthday today, but it wasn’t a joyous celebration: sylvester wasn’t around to celebrate. Instead, the family used the event to call for justice for their son and brother.

In the last couple of days, there have been heartbreaking videos of Sylvester’s final moments on social media; he was a student at Dowen College Lagos, who passed on after, according to him, he was beaten up by 5 seniors and given a substance to drink.

Sylvester passed away this week after complaining of pains in his mouth, throat, and stomach, according to his father in an interview with BBC Pidgin. He couldn’t even walk. Before he passed, Sylvester narrated the events that eventually led to his sad passing, his dad said.

It started at night; he and other kids were in their hostel with the lights on, then 5 senior students walked into their room, put off the lights and proceeded to beat him up to the point where he fell from his bed, and they continued to beat him up and step on him before giving him something to drink. 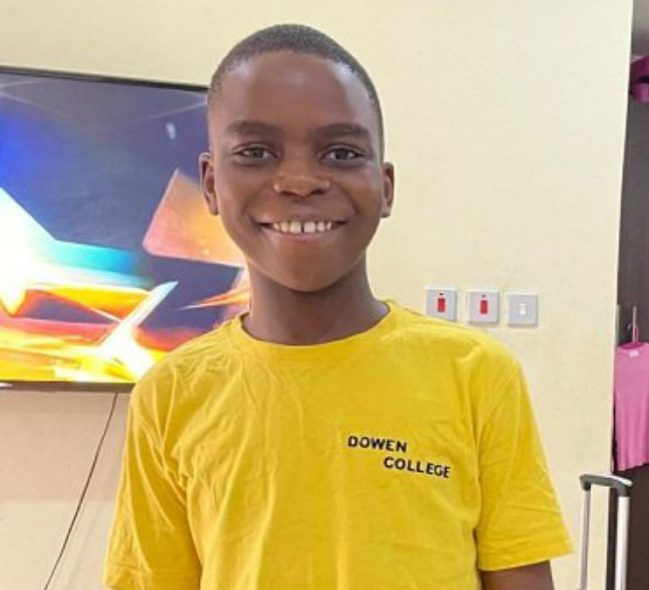 This is where the story gets a bit confusing: when Sylvester’s family was contacted, his mother was told he was injured while playing football and was being treated at the clinic. Things got worse and his parents were called to pick him up.

According to this interview with TheCable, Sylvester’s dad said when a family friend went to pick Sylvester up from school (as he was not in Lagos at the time), “he said the boy couldn’t stand because his waist was bent and swollen along with one side of his belly. His mouth was black. I asked, ‘is this really a football injury?’ He was taken to my house in Lagos but couldn’t sleep at night. I asked my eldest to fly to Lagos on November 24 while I took a trip to Asaba, from where I’d also make for Lagos. On getting there, he screamed. ‘This is beyond football injury. Come to Lagos now,’ he told me over the phone.”

This was not the first time this was happening to Sylvester, according to the dad. The same set of boys bullied Sylvester the previous term and collected all his foodstuff. Sylvester’s hostel was switched after the incident and the boys were suspended but that didn’t change much as the bullying continued into a new term.

Per Dowen College’s statement, after social media outrage on the sad incident, they swung into action and concluded that the students whose names were mentioned by Sylvester were not connected to his passing. The statement added that the guardian, who Sylvester’s parents sent to pick him up from the school was also present when the students mentioned were being interviewed.

“(Sylvester) said, ‘mummy, I didn’t play ball; I didn’t fall.’ He jumped off his hostel bed. They kicked him, matched his waist. Other students ran off. They threatened to kill them all if they spoke a word to the school staff. They warned Junior to say he sustained injuries while playing ball. They threatened him. If you ask the roommate, they’d all lie. They matched his ribs and waist. All that pain for a 12-year-old,” Sylvester’s dad said, adding that he had a swollen liver due to congealed blood.

The Lagos state government has closed down the school to allow for proper investigation into the sad incident, a step in the right direction.

But there’s a major issue here – bullying in schools. It’s not new, but it’s obvious we’ve probably, as a society, taken it with levity. A child should not be afraid to go to school or go to class for fear of being bullied. In the same vein, a child should not be the source of another child’s pain and misery in school or outside school.

Schools should have an anti-bullying policy; there really should be zero tolerance for bullying in schools, whether by students or by teachers. Schools need to open a channel of communication where bullying victims can report what has been done to them and by whom, without fear of future attack because they know the school authorities will punish perpetrators and protect them. The government and other regulatory bodies need to ensure this.

This shouldn’t end here. We have to come together as a society to say no to bullying. Don’t allow it around you. If you work with children in any institution, teach them to treat each other with respect, to report cases of bullying, and ensure that you protect victims at all times. We have to come together to not just condemn bullying, but fight it with everything we’ve got.

Bullying leads to life-long scars and hinders adult development. We should not stand and watch our society become dysfunctional, because we could not nip bullying in the bud when we had the chance.

To reiterate, we should be proactive against bullying and if for any reason bullying occurs around us, we should take actions that prevent it from happening in the future.

Our hearts go out to Sylvester’s family and we stand with them. We join other Nigerians to say #JusticeForSylvester.