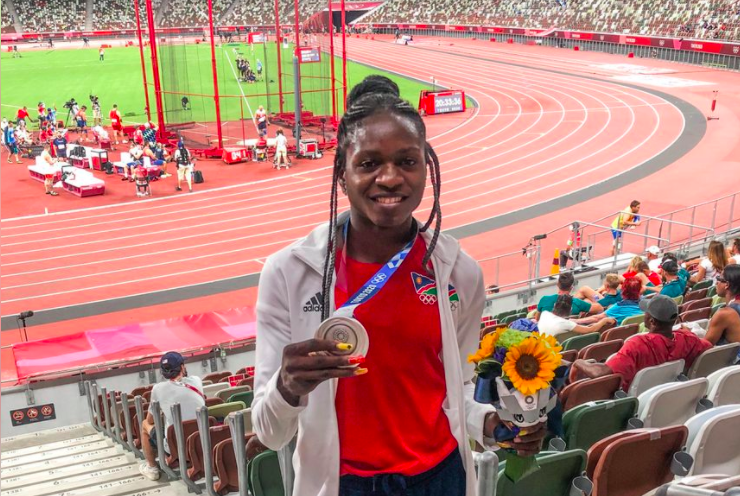 When the 2021 Olympics began, officials barred Christine Mboma and her teammate Beatrice Masilingi from the 400m race. They were allowed to compete in a 200m race instead. Mboma came in just 0.28 seconds behind the winner, Elaine Thompson-Herah, becoming the first Namibian woman to ever win an Olympic medal.

Mboma defied all the odds to win silver in the 200m race, but deep inside she felt betrayed. “I was shocked and I was also disappointed when our coach informed us about our withdrawal from the 400-meter race, but I knew I had to re-strategise and mentally prepare myself for the 200-meter race, which is not my favourite race,” she said.

Mboma explained that after being withdrawn from the 400m race, she couldn’t allow her feelings to get the better of her. She needed to prove a point to her community back in Shinyangwe Village: that it is possible to run your way to success.

Mboma’s story starts in that remote village, in the evergreen, fauna-rich Okavango Delta, in northeast Namibia. She was born on May 22, 2003, and lived there with her parents and a younger sister, oblivious to her gift, until she was a teenager.

In 2016, Mboma’s mother, Patricia, died during childbirth, and as her father had left home previously, she was left to fend for her two younger siblings. The three girls relied on the charity of their neighbours to survive.

A year later, in 2017, Mboma took part in school sprinting competitions and became an instant sensation.

At the May 2019 COSSASA Games in Manzini, Eswatini, she won both the 800m and 1500m. The following month, she won a bronze medal in the 800m at the Southern Africa Champions in Mauritius, coming in at an impressive 2:17:11.

Mboma’s determination to make a mark saw her win a gold medal in the 800m and a 1500 m during the November 2020 Namibian Championships in Windhoek. With little rest, she then flew to Pretoria in December to take part in the 400m and 800m sprints, achieving a personal best of 51.81 in the 400m. On December 17, she recorded a 57.51 time during the Namibian Youth Games.

Blazing a trail for herself, Mboma bagged a gold medal in Prague on June 7 at the Josef Odlozil Memorial after setting a new personal best and meeting record of 22.67 seconds in the 200m.

Between June 30 and the summer Olympics in Tokyo, Japan, Mboma trained hard and shaved more off her best timing. Coming in at 48.54 s for the 400m, she became the 7th fastest woman of all time and recorded the 12th-fastest result ever during the Irena Szewinska Memorial in Bydgoszcz, Poland.

But unknown to her, a controversy was already brewing.

A few weeks before the 2021 Olympics, the stellar performances by Mboma and her Namibian colleagues at the World Athletics Continental Meetings in the Czech Republic, Poland, and Spain-a prelude to the Olympics-had rekindled debate surrounding elevated testosterone levels in female athletes. They weren’t aware that the matter would follow them to Japan.

Mboma and her teammates had tested positive for elevated testosterone levels due to a naturally occurring genetic condition.
Mboma’s coach, Henka Botha, remains bitter about what happened in Tokyo. Botha said the withdrawal was unfair and threw their preparations for the Olympics off-balance. However, he praised the support his young team received from others in the sprinting world.

“We got a lot of support from the Jamaicans during our time in Tokyo. You know these things, man? I don’t want to get into it,” he said.

Botha recounted events leading up to and during the 2021 Olympics.

“A 2019 rule passed by the governing body of World Athletics caps athlete testosterone levels in women’s events from 400 meters to the mile. However, these rules are perceived to target black athletes and bar them from competing in events that they have dominated over the years. ”

The Mboma case draws stark parallels with that of South African 800-meter track star, Castor Semenya, who has been barred from taking part in the Olympics unless she takes testosterone-suppressing drugs.

Semenya, who was forced to undergo gender testing during the 2009 season after quick improvements in her times for the 800 meter and 1500 meter races, has raised the issue of victimization of athletes by the sporting world for naturally-occurring characteristics they have no control over.

In 2019, Kenya dropped two female athletes from international competitions due to their high testosterone levels after learning of Semenya’s case.

At the moment, Mboma’s career-like those of many other brilliant female athletes-hangs in the balance. The world athletics body appears reluctant to change its stance on gender characteristics.

Despite the controversy, Mboma remains a sprinting powerhouse. She finished the 2020/21 athletics season at number one in the 200m world ranking positions and has 1445 points, one ahead of Elaine Thompson-Herah, the 200m gold winner at the 2021 Olympics. Mboma’s story, however, is brilliant. Hopefully, the career ahead of her will be, too.