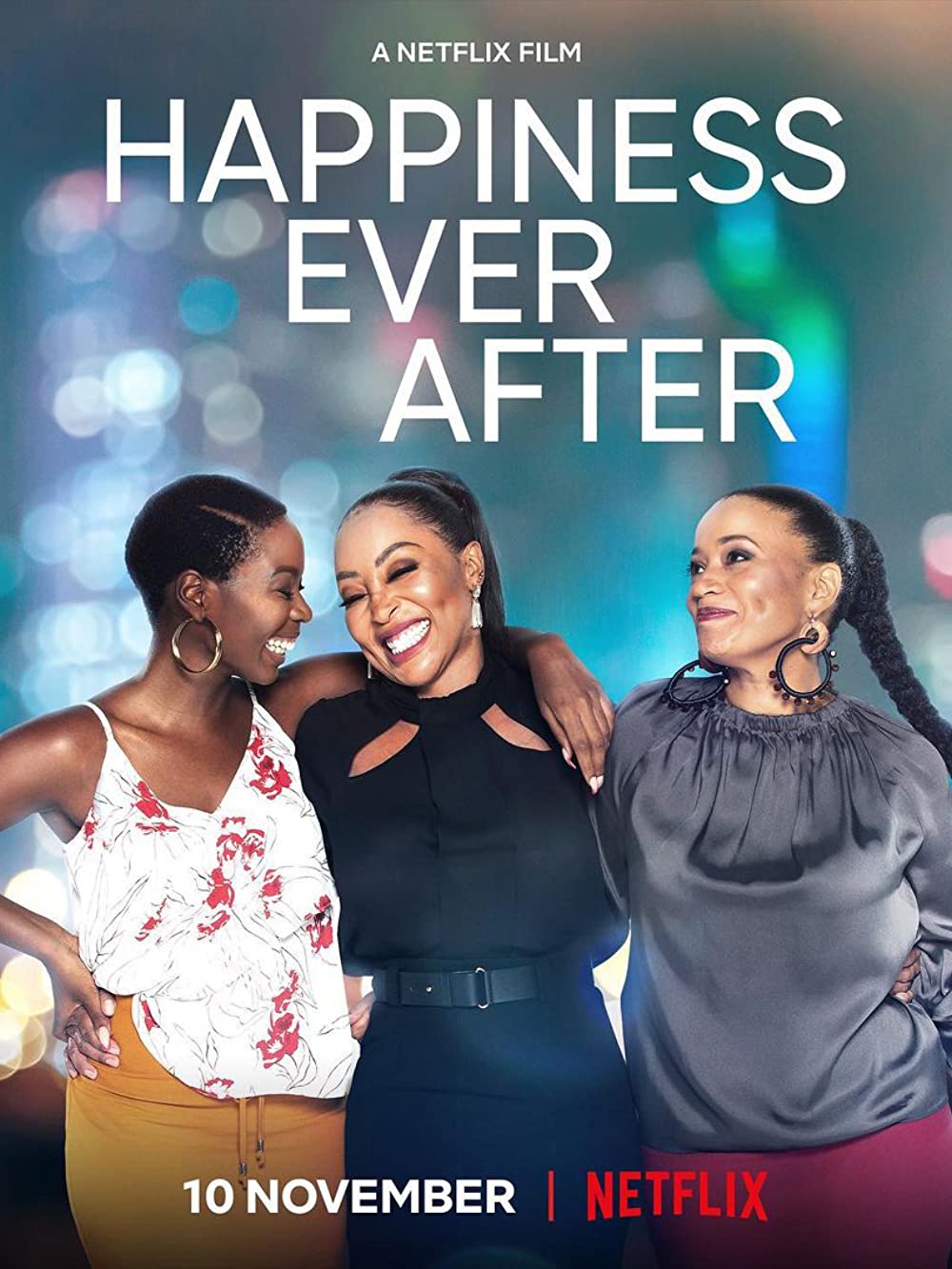 Happiness Ever After is a sequel to Happiness is a Four Letter Word, which was released in 2016. This movie is a continuation of the story of two women, Zaza and Princess, who are newly joined by Zimkitha, their yoga instructor, to make a trio. Zaza is newly widowed, Princess is a single mother to a four-year-old, and Zim is fresh out of a relationship of three years. The women each carry a burden deep down, but they are determined to give themselves the one thing that life’s circumstances are desperate for them not to have – happiness.

Zaza’s character, played by Khanyi Mbau, is fierce, strong and takes no crap from anyone especially her sister-in-war (law). They are both at loggerheads since the beginning of the movie and their drama somewhat lends fire to the otherwise calm ambience of the movie. Renate Stuurman plays Princess, a woman who is subdued and subservient, maybe due to motherhood and the tons of lessons in patience it teaches. She is now in a relationship with someone else named Maxwell, played by Daniel Etim-Effiong. Maxwell is a symbol of stability, assurance and safety, but he comes with the baggage of rigidity, condescension and patriarchy. Their relationship is fraught with monotony and Princess is a woman with wild passions deep down. This relationship has kept her in a box, but for how much longer? Our yogi, Zim, is played by Nambitha Ben-Mazwi. She is newly heartbroken and a little lost in her feelings and so when a Yonda guy comes along, she is quick to let her feelings run amok.

This movie is a representation of the different facets of relationships. Relationships between women and women, men and women, wives and their in-laws, parents and their kids, and so on.  It is a testament that in every relationship we keep we crave a lot of things and at the top of it is happiness. Zaza does not have that with her sister-in-law, Princess does not have it with Maxwell, and Zim is looking for it in Yonda. While happiness could mean different things for different people, we can agree that it is an integral part of human existence.

While I did not thoroughly enjoy this sequel in terms of the story line and some of the acting, I have to admit that the cinematography is lovely. I enjoyed seeing snippets of South Africa and its many tall buildings and trees. I love the way the camera captures nature and city life. I love how the camera highlights the characters’ faces to let us in on what they are feeling and how they are expressing it. I enjoyed watching the colourful hues of the movie bounce off my screen in joyful display. I find the costumes of the female characters quite interesting. I mean, I will totally raid Princess’ wardrobe if the opportunity arises. The way she could pull off an Ankara skirt and a silk blouse with patterned neck pieces is remarkable. In all, the cinematography is definitely not bad on the eyes.

I had a few eye-rolling moments during the movie. Zim is responsible for most of it; girl, chill and still your racing heart. This guy is not even worth it. What if you break your neck as you rush to pick up the call of a guy only calling you to hook up? And the grand entry he pulled during the end had my eyes permanently rolled heavenwards. Also, I could not even believe my ears during the proposal scene? What was that, Maxwell?! Do better next time please! Generally, the story did not hit me in the right spots, but the acting is good. And not that I like conflict, but Zaza and her in-law’s scenes are the ones I quite enjoyed the most. The incendiary stare downs, the intense atmosphere and the exchange of words all serve to bring the heat the story earnestly needed.

As you grab your popcorn to watch this movie, expect nothing. Just let the story take you on a journey with the characters in their search for happiness ever after.

Esther Okunlola is a Content Marketing specialist and literary enthusiast. When she is not consumed by work, she is writing short stories and poetry.

Related Topics:Happiness Ever AfterMovie ReviewThe BookLady NG
Up Next