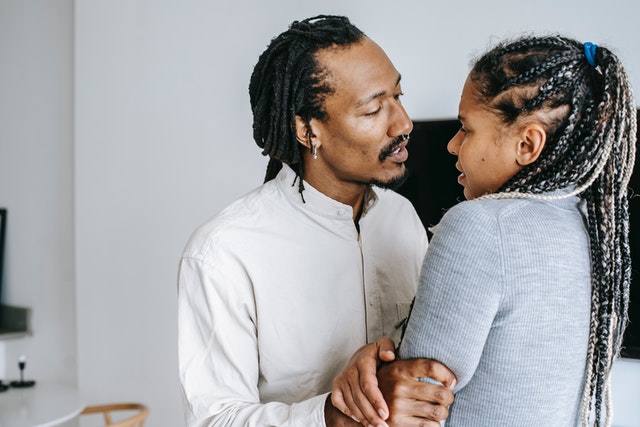 Since the news broke out about Osinachi Nwachukwu‘s alleged cause of death, I’ve been heartbroken and overwhelmed, especially with the permanence of death. The fact that the victim cannot get a second chance to have a do over, and take the advice of so many of her fellow women – to run from the marriage.

Since the news of her demise, I’ve seen so many WhatsApp updates and Twitter/Instagram posts, telling women to leave first and not worry about what society would say, and all of that. But I realized that while we mean well, we haven’t asked the most important question yet: why do women stay in abusive marriages.

When I was younger, my siblings and I usually did our hair at a salon not far from the house, the place was owned by a member of our church. I remember seeing her with all kinds of bruises on her face and mouth, I remember the hushed whispers among the older women consoling her. I remember hearing a hushed “don’t worry, shey Chibike will soon grow, and he’ll be afraid to hit you again in front of him.”

I remember the older women shaking their heads solemnly, and hugging her shoulders. But I can’t remember any particular whispers asking her to save her life and leave the marriage.

There are lots of reasons why women stay in abusive marriages and I’ve compiled some of them based on the personal experiences of survivors that I’ve read and other research around the subject.

This is probably the most potent reason women choose to stay in abusive marriages. They somehow feel that they have “failed”, that they couldn’t “keep a home”. Even when all evidence is pointing to the fact that the breakdown of the marriage is not her fault, she still somehow manages to apportion herself a very good amount of the blame. And can you really blame her? When all the women around her have recounted stories of how they endured much worse but didn’t leave.

She has also probably heard this line from her loved ones and close associates “most of the people advising you to leave are relaxing in their husbands’ houses, choose wisely o.”

I once heard the story of a woman whose husband pulled a gun on her and her pastor told her to “go home and be a good wife”, after “cautioning” the husband. Some women believe wholeheartedly that an abusive marriage “is their cross to bear” and they’ll receive the reward on the last day.

I used to struggle with believing how this can possibly be true, but research has shown that oftentimes, there’s a twisted psychological and emotional dependence going on between the abuser and the abused. This is a whole topic on its own that needs to be explored in order to get to the root of the problem.

The stigma of having a failed marriage

Look around you, the acceptance of divorce and single parenthood is still being frowned heavily upon in our society. It’s not a place a woman would willingly wish to find herself, except she was presented with life or death options, and even then, not every woman will be courageous enough to walk away.

The fear of the unknown

For a woman who has been married for so many years, where does she go from there? How can she start all over again? The fear of starting life afresh often keeps them rooted at a spot.

Financial dependence on the abuser

The way the institution of marriage is structured (if there is any structure at all) in our society makes it possible for a man in his forties to marry an university undergraduate who is yet to find her feet in life financially. Underage marriage is also still prevalent in some parts of the country and in the world. Too many women go into supposedly lifetime unions with no jobs, businesses, bankable skills or how to go about getting any of them. It doesn’t also help that women are taught to pursue their career and financial freedom less.

They start having kids which further limits their freedom to pursue other personal goals in those first few years and the resultant situation is always full time financial dependence on their spouses, who now feel like their lords and personal saviours, without whom the woman has no right to breathe or smile, to talk more of being happy.

Most times, the self confidence and worth of these women have also taken such a beating over the years that they genuinely believe they can’t get money of their own.

My heart is heavy. I pray that the soul of Osinachi finds rest in God’s bosom, that her legacy of soul uplifting music lives on, and that we can put systems in place that will focus on therapy and mental liberation of domestically abused women in our society.

One can only hope that we don’t receive such heart wrenching news again in the near future.

A new marketing superpower for this businessman: selling yogurt with music

Temi Otedola’s Engagement Ring is Fit for a Queen