Tea Time: How Simple Cups of Tea Can Change Your Life this Year 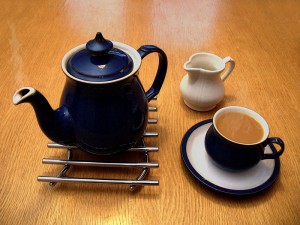 If one of your new year’s resolutions is to be on that healthy side of life, one of the most important things you can do is add tea to your menu. Tea, composed of the Camellia Sinensis plant, is one of the most widely-consumed beverages after water. Studies show that your morning and afternoon tea contain antioxidants, anti-cancer and anti-inflammatory benefits, that boast your bodies abilities to fight “free radicals” which make you sick. This “wonder drug” is composed of Polyphenols found in the Camellia Sinensis plant that research shows contain cancer-fighting properties and fat eliminating enzymes. The Camellia Sinensis plant, based on its oxidation level, produces 4 types of tea: Green, White, Oolong and Black tea. To better help you understand how best to maximize the health benefits of Tea, below are descriptions of the different types of Tea.

Green Tea leaves and extracts have shown to be effective against bacteria responsible for bad breath. Composed of mildly oxidated Camellia Sinensis leaves, Green tea has been show to help in weight loss management because of its natural levels of Caffeine, as well as its ability to break down fat in the body. Green tea has been subjected to many medical studies that report its benefits in reducing the chances of developing heart disease, different types of cancers, inflammatory bowel disease, diabetes, liver disease, and even bad breath. Due to its many benefits, Green tea is often used as traditional medicine in areas such as China, Japan, India and Thailand.
Unlike like Green Tea, White Tea is an unoxidized version of the Camellia Sinensis plant. White teas are often composed of young tea leaves and have been found to contain lower levels of caffeine and unlike the other types of tea, is known to contain anti-viral and anti-bacterial.
Oolong Tea is a semi-oxidized tea that is commonly used to control diabetes, because of the Polyphenol in it that enhances the body’s fat metabolism. Polyphenol in Oolong tea activates the enzymes that are responsible for dissolving triglycerides (fat).

Black Tea is the most common and heavily consumed tea, made up of fully oxidized Camellia Sinensis plant and contains the same amount of antioxidants found in both Green and White tea but in a lesser amount. Due to its high level of oxidation, Black tea, compared to the rest is more intense in flavor; but regardless of how bitter it might be, should be consumed with minimal milk as to not reverse the antioxidant and health benefits of consuming tea.

Along with the 4 main types of tea, are herbal teas that aid in naturally healing the body. Herbal tea unlike the other types of tea listed above does not contain traces of the Camellia Sinensis but are usually infusions of fruits or herbs. Such teas include: Chamomile, Peppermint, Sage, Cinnamon, Fennel, Roolbos, Thyme, St. John’s wort, Nettle, and many others. Chamomile tea is usually composed of the chamomile flower which is often used to induce sleep, calm nerves, prevent cold systems, as well as sooth stomachs. Peppermint Tea, unlike other teas contain the B vitamins, potassium and calcium. It is a tea composed of tea and peppermint, and the menthol that it contains is said to be used to ease the problems of irritable bowel syndrome, nausea, vomiting, diarrhea, headaches as well as eradicate bad breath. Cinnamon Tea which comes from the cinnamon bark is known to improve blood circulation, relieve upset stomach and ease menstrual cramps.
All these benefits of tea are based on the assumption that the tea is not consumed with milk. Research shows that adding milk to tea blocks the normal and health benefits that tea has in protecting your body from cardiovascular disease because of a milk molecule that binds and weakens the cancer-fighting agent in green tea.
If you still feel like drinking tea is not your “cup of tea”, you can still benefit from them without ingestion; for example eye puffiness can be reduced with the placement of cool moistened tea bags over the eyes.

Here are some more tea beauty tips from Dr. Vivian Oputa of Westpine Medispa as published in Vanguard Newspaper:
1. Herbal teas can be used in hair coloring; Sage tea is often used to darken hair, while chamomile tea is used to lighten naturally blonde hair.
2. Placing a moistened Green tea bag, over a cut or an insect bite, can be used to reduce itching and swelling.
3. If you are sunburned, you can soothe your body by taking a tea bath comprised of running a tap over 5 bags of Oolong, Jasmine and Green tea; and applying soothing moisturizer afterwards.
4. Problems like athletes’ foot and foot odor can be minimized with the help of black tea. Simply soak the feet in bowel with black tea; black tea contains natural antibacterial and astringent agents.
So next time you’re looking for something to drink or trying to curb your appetite be sure to brew a cup of tea and relax.