BN Prose: Excerpt from the book "A Heart to Mend" by Myne Whitman 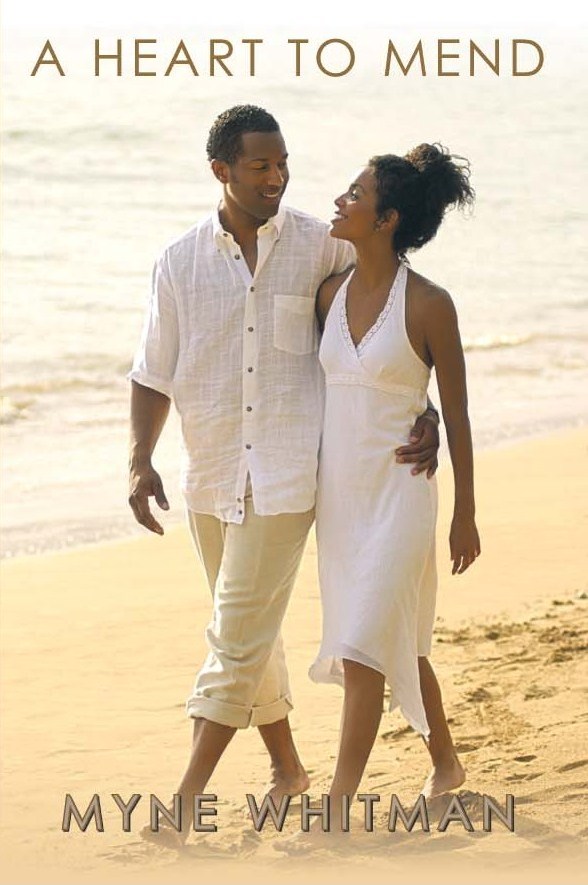 “Gladys, Gladys!” The sound of her name had her springing out of bed. It was late afternoon on Wednesday, and she was back in her bedroom after tramping the streets of Lagos in search of That Elusive Job. It was Aunt Isioma’s raised voice that had jerked her out of a reverie. She left the room and took the stairs down, two at a time.

“Did you call me?” She entered the living room breathing quickly.

Her aunt was watching television but looked up when she walked in. “Yes, sit down Gladys. I have something for you.” She gestured to the seat beside her.

“This was in my post office box today.” She handed over an official envelope.

“It’s from Zenon, isn’t it? And about time too. Let’s see the letter, Gladys.

“Gladys fumbled over the flap and finally got it open. She wiped her shaking hands on her thighs, drew out the embossed sheet and spread it flat over her left palm. When she collapsed on the back of the seat, her aunt snatched the paper away from her hands.

“What is it Gladys? It’s not the end of the world even if you didn’t get the job with them. There are other opportu…” Aunt Isioma scanned the letter with a sharp gaze.

“YES!” She jumped to her feet and dragged Gladys up into her arms. “This is fantastic news, I’m so happy for you. Congratulations!”

Gladys couldn’t speak for a moment and could not even hug her back. Her heart pounded in her chest and incipient tears clogged her voice. Soon, the water flowed from her eyes. A sob escaped and soon she was almost heaving with tears of joy.

“It is all right, don’t cry dear.” Her aunt sat her back on the seat and settled herself on the arm. “Wipe your tears. You have to call your mother, she’ll be thrilled.”

Gladys sniffled once more and inhaled deeply. She collected the letter from her aunt and reread it. It was still there. It was true. She had landed a very well paid job with an oil company. After the months of searching, she had done it. She pinched her arm to be sure this was not a dream. “Thank God,” She breathed as she raised her eyes. “Thank you too Aunt Isioma”.

Her aunt hugged her again. “Why thank me? You did good all by yourself.”

“I still want to thank you.” Gladys had a lot to be grateful to her aunt for in the past few months. Aunt Isioma had left her the run of the cars, arranged some interviews for her and made sure she was as comfortable as possible in the house and enjoyed living in Lagos.

Gladys moved between the sentry palms into the dining room, taking her mobile phone from her jeans pocket at the same time and punching in her mother’s number.

Gladys could almost see her mother settling into one of their seats back in their Enugu flat and her tears gushed again. Her mother had replied in Igbo. How she missed that language sometimes. Here in Lagos, one was forced to speak English most of the time. The locals largely spoke Yoruba or the pidgin parlance though most of them understood English. Even Aunt Isioma spoke more Yoruba or English than their native Igbo.

Is it that job you applied for last week?” “No Mama, this is the Zenon position that my lecturer recommended me for.” “Ehen, what happened? Have you finally heard from them?” “I got the job Mama.” Gladys decided to keep it short and to the point. She laughed through her tears when her mother screamed and began to sing her favorite Igbo praise song.

“Daalu maka idi nma gi Chineke, maka ihe oma I na eme. Chineke daalu…Thank you Lord for your goodness, and all you have done. Thank you Lord…”

Her mother continued to sing and Gladys danced to her voice over the phone. Finally they prayed together and said their goodbyes but not before she promised to keep her mother up to date with everything that happened. She turned to the door to see Aunt Isioma looking on with a small smile on her face.

“How is your mother?”

“She’s fine and the boys too.”

“You don’t have to tell me how she took the news. I watched you dancing.”

Gladys laughed. “It was very good speaking with her; I miss her so much sometimes.”

“I understand. Since my last daughter moved to start school in the States, I have to force myself not to move there. But no depressing thoughts, not today of all days.”

Aunt Isioma looked at her with such pride and joy on her face that Gladys forgot the restraint that usually marked their interactions. She walked across the room and allowed herself to be enfolded in the older woman’s arms.

The following is an excerpt from Myne Whitman’s debut novel “A Heart to Mend”. Autographed copies of the book can be purchased from the author’s website, http://www.mynewhitman.com. The book is also available online from Amazon and in all major bookstores across America, Canada and the UK. It will hit the shelves in Nigeria soon.

About the book: (Reviewed by Olamild Entertainment)

When you pick up…Myne Whitman’s debut novel, A Heart to Mend you wont drop it till you have reached its last page. A story of the relationship between a young woman, Gladys, who falls in love with a rich businessman when she moves to Lagos, A Heart to Mend would take you through emotions of love, angst, passion, happiness, pity, and irritation all at once.

And many would relate to the book as it is about a young woman who moves to a big city as much as it is about an Oil company executive…it is also about family ties and the challenges families often face; as we would find how Gladys’ gradually resolves the mystery of why her aunt cut all ties with their family.

More than anything this book is a breath of fresh air – very different from the stereotypical images portrayed in most books regarding the continent. Far from stories propagating wars, disasters, poverty, anger, or colonization…this is just plain easy feel good read like a top selling novel sitting on the Romance aisle at Borders or Barnes and Nobles.

“The Plan”: An Alternative Strategy for the Contemporary Single Woman