In the December 2008, the Creative Director of Power fashion house Tiffany Amber Nigeria – Folake Folarin-Coker collaborated with one of her favourite muses – Tope Edu. The collection was so popular that it sold out on the actual day of the launch, this definitely was a first of its kind in Nigeria.

Folake Folarin-Coker said “We (Tope and I) felt, that we wanted a piece that would fit into any wardrobe, anywhere in the world but still retain an African signature. The Peter Pan jacket did just that; we called it Peter Pan because of its shape and it’s almost fairytale like elegance. Ultimately we wanted to bring the freshness of the new African aesthetic to the world stage.”

The Peter Pan Jacket comes quilted and hand-embroidered and there are apparently innumerable ways to style it as shown by numerous stylists from all over the world. The Peter Pan Jacket is a runway success featuring in the Tiffany Amber A/W 2009 collection at the Mercedes Benz New York Fashion Week where it was described as a piece that belonged in the white house in the wardrobe of Michelle Obama. It was then shown at Fashion Business Angola in 2010 and has since become a staple in Tiffany Amber collections.

The Peter Pan Jacket on the Fashion Business Angola 2010 Runway

On her visit to Nigeria in January this year, Vogue Italia’s editor – Franca Sozzani fell in love with the Peter Pan Jacket and wore it. 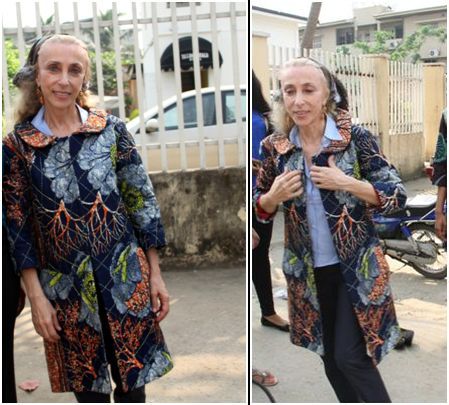 Franca Sozzani in the Peter Pan Jacket in Nigeria

You too can buy the Peter Pan Jacket on Yoox.com – one of the larget online retailers in the world. Folake has also exclusively informed BN that the Tiffany Amber pieces below will be available soon on the website in a growing partnership between the retailer and the designer. 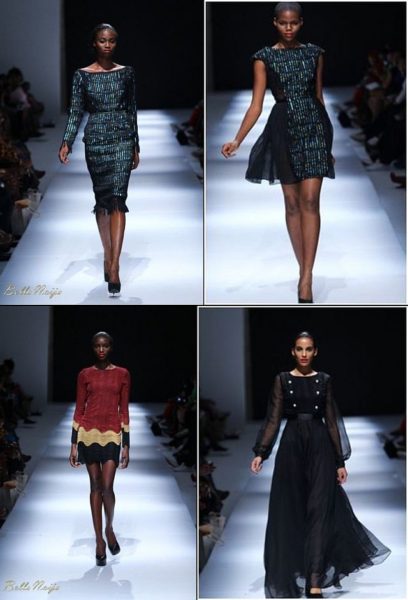