Don't Be That Guest We All Hate To Host! 7 Things To Note When You Have To Sleepover 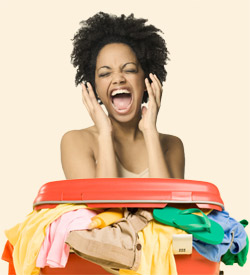 When you’re a kid, sleepovers can be fun! My mother never allowed me go anywhere, so the idea of having a friend sleep over was FANTASTIC news! As I grew older (read as more anti-social), the prospect of having people sleep over became more and more tiresome. In my first year at Unilag, I stayed in “Newest Hall”. Newest Hall was the “freshman” hall. Each room in Newest Hall was  fitted with 6 double-bunk beds, so there were 12 people originally meant to stay in the little room. Then there’s one little factor added to the dynamics… SQUATTERS.

Not everyone gets accommodation, so if you have a friend who got space allocated to him/her by the school you’d ask nicely if you could stay temporarily till you sort yourself out. Having a squatter has to be one of the most uncomfortable things ever, especially in that kind of of environment.  When they’re coming, they say it’s “just a place to sleep at night” but it’s never JUST!  It’s about where they keep their clothes, their bucket of water and where their friends will stay when you just want to catch a quick nap before you head on over to EduAud to read! Suffice to say that I have horrid memories of having a squatter. She never remembered to refill the buckets of water, so I’d go to class in the morning, having told my “any work”  to fill all my buckets and my dear squatter friend would finish the water before I got back. I couldn’t wait for her to leave. It was extremely uncomfortable.

Outside the university, I’ve heard several horror stories of how some friendships have fractured because of sleepovers. Someone told us of how an old friend from secondary school called her up saying she had an interview in Lagos. From one weekend the matter entered five weeks of having a ‘tenant at will’. The friend from Onitsha said nothing about her expected departure date and just generally lingered. What made the matter particularly more excruciating was the fact that the girl was really untidy and she crossed all the lines. She didn’t bring her own towel so she helped herself to her host’s own. It was like having a squatter all over again; I mean what else can you call having to hide your facial scrub and deodorant spray inside YOUR own house?

I’ve heard stories of people who leave toothpaste all over the sink, soap suds on the wall of the bathroom and urghh… people who drink water directly from the bottle!

Now, I’m not saying that having people stay over is bad because the truth is at some point or the other we might need help with a place to stay. However, it’s important to be very sensitive about some things.

This is an open-ended list and by no means exhaustive. We might take things for granted saying “please we’re Nigerians not oyibo” but being properly behaved and courteous at all times is very important.

BN Cuisine With Chef Fregz: My Love For Rosemary