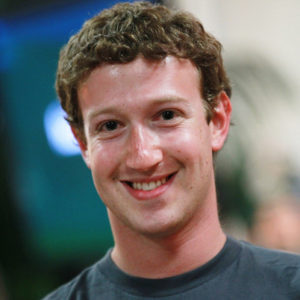 Facebook CEO, Mark Zuckerberg hardly uses his own site to make announcements, at least not as much as most of us. But the few times he does, it usually makes the news. The young billionaire announced that he had gotten married in a private ceremony some months ago on Facebook by simply changing his status from Single to Married. And today, he announced on his wall that the social networking site has hit a total of one billion users using it actively each month. This means 1/7th of the world’s population uses Facebook.

The message already has over 400,000 likes. He wrote this on his wall: “This morning, there are more than one billion people using Facebook actively each month. If you’re reading this: thank you for giving me and my little team the honor of serving you. Helping a billion people connect is amazing, humbling and by far the thing I am most proud of in my life. I am committed to working every day to make Facebook better for you, and hopefully together one day we will be able to connect the rest of the world too.” 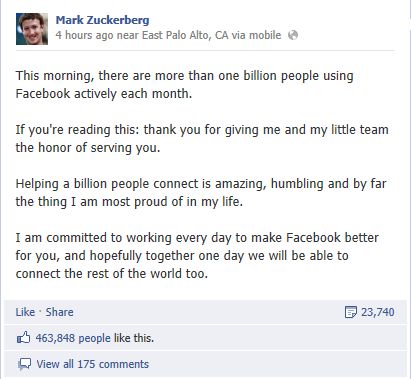 This announcement is coming a few days after he granted his first television interview since the social network’s IPO to Today’s Matt Lauer. I remember reading the story on Daily Mail and smiling in admiration of the young billionaire’s humility. He revealed that he owns multiple t-shirts of the same color so he doesn’t have to worry about what to wear. This makes him seem like he’s wearing the same shirt almost everyday. He even wore that same shirt during the interview.

“I mean, I wear the same thing every day, right?” said Zuckerberg. Asked by Lauer if he owns 12 of the same gray t-shirt, Zuckerberg admitted it was more like 20. He revealed that  he doesn’t get much closet space at home, which is mainly used by wife Priscilla Chan, but instead, his identical t-shirt collection lives in the one drawer that he gets to use. “Like men everywhere,” said one of the world’s youngest billionaires. Some time ago, he created quite a buzz when he wore a pair of blue jeans to a friend’s wedding. Here are some few times he has been caught wearing the same grey shirt. 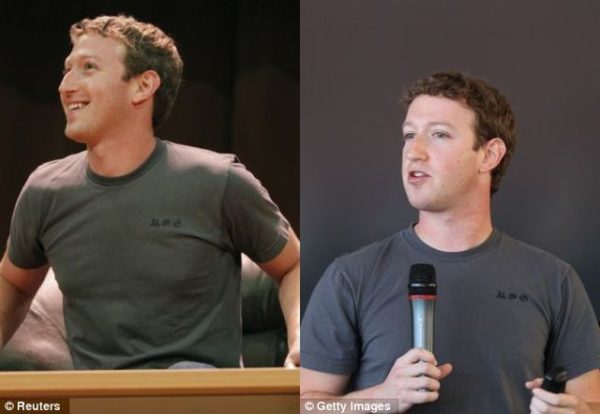 Zuckerberg is also well known with hoodies. He has been seen wearing those more than a few times but he didn’t say how many he owns during the interview. However, he revealed that Apple’s Tim Cook sent him an iPhone 5. A few hours ago, he announced on his wall that Facebook had made a video to illustrate how over a billion people around the world use it to connect with one another. “For the first time in our history, we’ve made a brand new video to express what our place is on this earth.” Check on it!

Visit NBCNews.com for breaking news, world news, and news about the economy

There’s Nothing Like A Mother’s Love: Presenting the Introduction to Ariel’s Super Mom Reality Show

From Start to Finish! Enjoy a BN Reader’s Insight on the Elite Model Look Nigeria 2012 Finale in Lagos