Atoke's Monday Morning Banter: A Tale of The Ex & The Boo 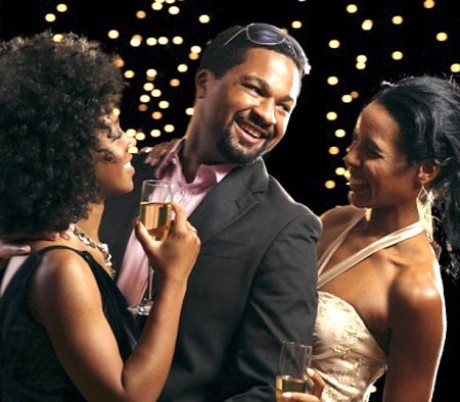 Do you know that feeling where after you finish exams, you don’t know if you should sleep for 18 hours at a stretch; or just drink a lot of wine and collapse from excess consumption? Everyone who has been to the Nigerian Law School will tell you about the horrors of the exam called “Bar Finals”.  We all experience this feeling and many students in the Bwari campus just flock to a joint called La Liga. They usually drink themselves into sleep oblivion. Blissful oblivion of having nothing to do or worry about.

On Friday, as I handed in my portfolio, I didn’t know whether to sleep, or to catch up on episodes of The Good Wife. It was a listless feeling of a great weight having been lifted from my shoulder. There was also that situation of not knowing what to do with myself. This is me who has spent the last 4 months having a deadline or the other every week and suddenly there was nothing to do. I couldn’t sleep, because my body had gotten used to just sitting in front of my computer, punching away. So, I tried to force myself to sleep.
“Ping!!!”
Oh God! I had forgotten to put my phone on silent mode. I ignored it, but the vibration continued – on the bedside table – giving off this really annoying sound.

I squinted and looked at the offensive little gadget. “What?” I didn’t care if I was being rude. It was my day of nothingness. I didn’t want to have to struggle with auto-correct and annoying back light from my phone.

My friends have apparently become immune to my rudeness because she just kept typing. “I hope you have been watching Shuga Naija?”
“No, I have been working on my portfolio. Like a good girl.” Well, actually I have but hey… I had to justify all my unread and unreplied messages. 😉
“Shebi, you said you have submitted now, go and catch up. It’s on BellaNaija sef“

Well, it wouldn’t have been a good time to mention to her that she was preaching to the choir, so I asked what it was I was supposed to be looking out for in Shuga. Apparently, she had recently found out that her boyfriend is friends with one of her exes. The said ex is one she thought she had found true love with. It was quite the whirlwind love affair until it came to a screeching halt. It was very bad – her things were in his house; he told the steward not to let her in unless he was there. They were yelling in front of the help. Not her finest hour, really.  Anyway, it turns out that her ex, and this guy she is currently trying to build a life with, met through a mutual friend many years ago. She wasn’t very comfortable with it and the Ekene/Femi situation on Shuga reminded her of how she might be sitting on a volcano waiting to erupt.

I ran the situation by my friend, Mo’ (who is the repository of ALL relationship scenarios) and asked him if he thought it was really anything to worry about. As usual, he had been in that situation before. In his case, his incumbent and ex were friends. When he was dating Girl A, Girl A and Girl B had an incumbent friendship. Then the relationship ended, he dated Girl Random for about 9 months and then social media happened. He found Girl B again and somehow, they hooked up. It wasn’t a case of snatching (though it is open to interpretation).

Now, seeing as Girl A and Girl B were still friends, they tried to act like they were cool with the situation, but the situation became really tense and eventually caused a crack in their friendship.

“Why is it their friendship that took a beating and not your relationship?” I asked.
“You know how girls are now. My girlfriend at that time said her friend was trying to make her feel like she was having her cast off“

Ladies and gentlemen… how does one deal with this situation. Are you cool with your boo being friends with your ex? How do you handle the dynamics? Is it all cool? Or is it dependent on how the relationship ended?
Please share your thoughts. In the meantime, I have a backlog of sleep and TV shows to catch up on. My own Christmas holiday just started.

Have a fantastic week ahead. Don’t let anybody upset you and remember to spread love and good cheer.
Peace, love & cupcakes