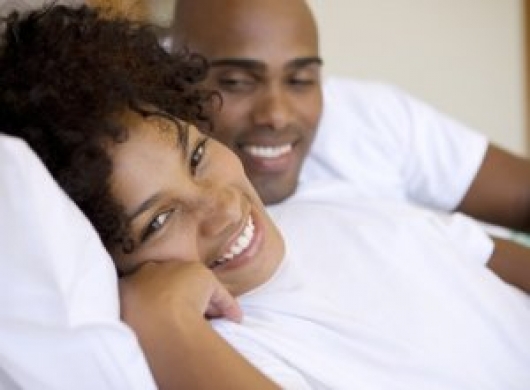 Some people say that one of things they find cute about some couples is the fact that “they’re so in love that they even start to look alike”.  This line of reasoning has always given me cause to pause and consider the validity in the assertion, especially as I am one of those people who always has to find a logical explanation for something.  Sadly. So, when I noticed that my friend and his wife seemed to be blending into one another in photographs, I had to ask. Could this be what people mean when they say couples look alike?

This guy, who is a regular jeans and cut-offs kind of guy, was slowly morphing into this brocade clad, different-forms-of-Ankara-Kaftan-rocking individual. According to him, his wife insisted that his style of dressing ought to change, in order to conform with his newly acquired status of being ‘a responsible family man’. After arguing for whatever shred of independence he had left, and realizing that the fights were definitely not worth wearing lace for a few hours on weekends, he gave in. He now silently bears the burden of his Atiku, while enduring the unwanted attention that comes from looking like ‘A Big Man’.

I know a lot of people whose dressing, hairstyles, have had to change because they got into a relationship. All of a sudden, a girl, who can’t be apart from her make up set, is told ‘Baby, you know I like it when you look natural’.

Back in Uni, one of my roommates was struggling with receding edges. After years of patronizing those hair braiders behind Moremi Hall, she realized that years of making Sade Adu and Feathers in quick alternates had ruined her front hair. {I tried to find images to show these hairstyles to give visuals for those who don’t know it. No luck}. Anyway, she decided to go on a long break to allow for the regeneration of those roots. Then, her man started complaining that liked her better when she had braids on. He didn’t like this new regime of leaving her hair out. And on, and on it went… till she was back at Iya Sikiru’s stall, braiding her hair.

That scenario always made me wonder if these demands are as a result of a certain perception of what we would like our ideal partners to be. But it also begs the question of whether people should have caveats ‘Goods Sold in This Condition Can Not Be Amended/Altered’. Essentially, if you fell in love with him and his cut offs, why would you want to change that? Or were you just biding your time and hoping to lock down the goods and then state the terms and conditions of the merger.

As usual, I bounced this topic off the repository of ALL scenarios on earth. Had he ever asked his girlfriends to change anything? Had any of his girlfriends asked him to change anything? He shared the experience of how he used to be really averse to wearing ‘native’. However, the girlfriend who converted him into a Kaftan wearer did it so subtly, that he didn’t even realize when he changed. She would buy the fabric and have it sewn and delivered to him. He also mentioned that he also had a way of showing his preferences; in a style called ‘positive reinforcement’. He’d commend hairstyles and outfits that he liked more than others.

I have been told that certain religious and traditional constructs have requirements and as such, adherents have to comply. But one wonders if these requirements bind the adherent, or the appurtenances of the adherent.

God knows I’d be utterly mortified if I meet a man who says to me that he doesn’t like how I wear my hair in all its Kinky glory. Maybe 10 years ago, I’d probably have whimpered and tried to ‘explain’ why he should like it. However, with old age comes a lot of confidence and self worth. I’d probably thank him for his opinion and keep on keeping on. Me, my hair, and my clothes come as a package. If I’m not telling you to wear Adire Shirts & Khaki shorts to events (You know how we creative people do our things), then please don’t ask me to change my hair.

Have you asked your partner to change a certain part of his/her style because you don’t like it? What was it and why? What’s the one thing someone would ask you to change and you’d completely balk at? How about the issue of weight? When you meet your boo, you love him and his lean mean self. Would you ease him into the CarbFactory just so that he fleshes out a bit, enough for people to know that he’s being ‘taken care of.’

Wishing you a fantastic week ahead!