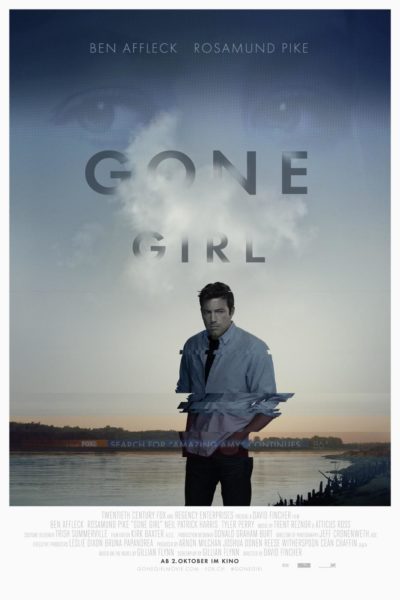 For a lot of cinephiles, they probably admitted this ages ago, so apologies for arriving at the party a bit late. So here it goes… DAVID FINCHER IS A MOVIE MAKING GOD!!!

Gone girl is a loud film, Surprisingly for a low-beat psychological thriller.This is amazingly so because large part of the movie revolves, not around things as they are, but things as they appear to be. It is bolstered even more by the severely biased minds of its main characters (But really, isn’t that how humans really are?) It is a film grounded in so much surrealism, Fincher has led us into a world where we live the characters’ lives as it is in their heads, so much so the reality becomes very displeasing for both Nick and Amy Dunne. Amy justifiably more unbalanced and crazy than Nick, but who is really at fault here?

Very early in the movie, Nick Dunne returns home from the bar to find Amy, his wife of five years gone and a table overturned and broken with signs of struggle. Naturally, he calls the police and the ensuing search takes us into the shallowness and depths of human capability. Nick, a Missouri-bred, former men’s magazine writer, self-described as a type-B personality feels the pressure to seem more affected by his wife’s disappearance leading to a series of catastrophic overcompensations. The climax of which is ultimately the “killer smile” scene. Amy, the pregnant blonde, beautiful poster child for American sympathy, we find out has been increasingly dissatisfied with her marriage through a series of journal entries taking us from their happy newlywed, sex everywhere phase to her fear that she has become something to be discarded.

From start to finish, my eyes and thoughts were fixed on getting to the tail end and I just kept biting my fingernails in anticipation and asking myself ‘What next? Oh my! what next?! It can’t get any worse than this, can it?’
Not reading the book ahead of seeing the movie was a big plus for me. But two years seemed like a mighty long time to have an amazing book like this adapted into a movie.

All hail the great and awesome David Fincher. With works such as The Girl with the Dragon Tattoo, The Social Network and The Curious Case of Benjamin Button (one of my favorites) one can’t help but bet good cash on this one.
The twisted psychological thrills and suspense all the way to the score of the movie sent shivers down my spine. There is this scene which shall not be described (let’s just say, it’s a very violent scene) where my heart almost beat out of my chest. It’s been a while since a thriller gave me such chills. And this wasn’t just any kind of thriller. It was a masterfully made mind juggling puzzle.

It was almost impossible to figure out what to expect next. Once in a while, a movie so well written comes around that you can hardly figure it out. You have no idea what to expect in the next scene. You simply just sit there, marvel at the movie’s awesomeness shrouded in nail biting and pee holding suspense and anticipate the next thing that would be thrown at you. I duff my invisible hat to Gillian Flynn for birthing this masterpiece. Buuut, in life nothing can be perfect so I’d have to give a downside approval to the scenes before the end credit. Yeaaah…we can’t always eat our cake and have it can we? Damn you Gillian.

Central to the story is the score, masterfully composed by the duo of Trent Raznor and Atticus Ross. A score so potent in fear, you don’t realize how afraid you were till the moment has passed and you heave a sigh of relief. It lulls you into a false comfort keeping you only just mildly aware of the danger looming before you. Look out for ticking clocks, drowning sounds and haunting shrieks. The cinematography is flawless, coated with beautiful hues that shift as frequently as the storyline.

Come on! With Ben Affleck , Rosamund Pike, Tyler Perry, Neil Patrick Harris and Carrie Coon all guided by David Fincher. What could go wrong?
I haven’t really had the chance to watch Rosamund and Carrie on the big screen till recently but I couldn’t help but fall in love with their talent. To think Carrie looks NOTHING like her character on set was unexpecting. Then Rosamund was just…just the star of the show. Do not underestimate the wrath of the female specie. Never. Never, ever.

Neil Patrick Harris and Tyler Perry were a breath of fresh air. I really loved not seeing Madea in a movie featuring Tyler Perry. I couldn’t help waiting for Neil to throw up his hand for a legendary high five once in a while though…

Then Ben..My buddy Ben. Can’t believe I wasn’t into seeing his movies back in the day. I literally had to be dragged from wherever I was to see any of them. But then Argo, The Town and Good Will Hunting bit me in the ass (thanks to the big bro) and I never looked back after then. Still I’m kinda finding it hard depicting him as Batman…but that’s by the way.

The Verdict
Fill in the blanks people. You know what it is. You cannot hype a movie this much without it being a Popcorn & Soda.

Don’t need to give further reasons do I?
But, I shan’t speak for the masses so I give you the grace to give your verdict in the comment box below.

By the way, do you know that we will be giving away 50,000 Naira cash and a movie poster deal with a Sodas&Popcorn accliamed film maker to the Winner of the Nollywood Movie Spoof Competition? You wanna know more? Click here to find out.

Geraldine Ogwe: A Second Chance For a Second Wife