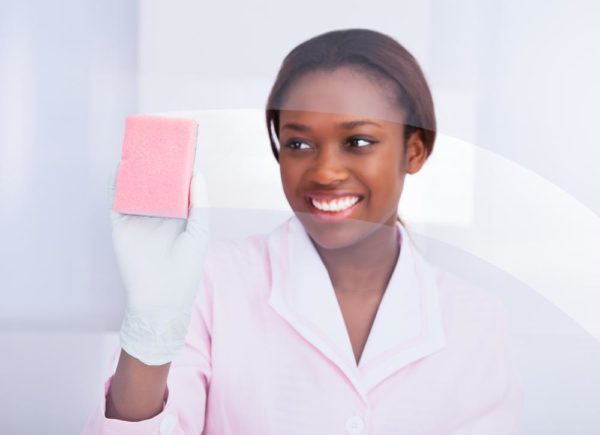 I had just arrived at the airport where I would take a connecting flight. After drinking a good amount of fluids on board, I had to get rid of the excesses.

“Hello, welcome, the first bathroom is free” – this woman greeted and signaled me to a bathroom with a broad smile on her face. Fear gripped me! I’ve never met an airport worker who was this hospitable while working in the restroom. Her positive vibe was just infectious. The more people trooped in, I noticed she did the same for everyone that walked through the doors. She diligently wiped the spills on the sink and toilet, after each person, and greeted every soul; including children. She offered to help people’s children use the toilet, and just stunned everybody with her actions.

I scanned her environment, looking for cues that might offer some justifications for her actions. At first I thought ‘eye- service’, but then there was no supervisor around to prove that. As I looked further, to my right hand, close to the end of the mirror and just before the exit, I noticed a tray with candy and jar labelled ‘tip’. That jar was blessed with cash! The more people were amazed at the strangeness of her actions, the more they squeezed out their money and tipped.

I’m used to giving tips at restaurants, airports, salons, e.t. c; but this was my first time seeing a tip-jar in the restroom, with a good amount of money in it, and people were still giving.
I’m not sure how much she made by the end of the day but I imagined she would have gone how with something more than her regular pay.
Some would argue she had that attitude because of the tips she receives, and maybe insincere with her greetings, gestures, and actions. I, however, think that’s one of the smartest women, I have ever met. She found a way to make the best of cleaning a toilet paraded by people from all parts of the country and even the world. She turned an idea into money. She cleaned people’s mess with a smile, offered to help with their children’s sanitary needs, and just had an amazing attitude about what she did. She made you feel like royalty once you walked into the restroom. She delivered a unique service to the point that once you saw the jar, you wanted to do something more to tell her thank you.

I’ve had people deliver crappy service and still expect appreciation. Most times we pray and cry for promotion or status change, but we deliver our assigned duties with a very poor standard. Watching this woman, I learned a few things. One of which is, a genuine smile can never be overestimated. Just a pleasant attitude attached to what you do; regardless of what it is, can attract favor. Some of us sit in air-conditioned office and complain from the beginning of the day till the end of the day. Sour attitudes just make everything you do look horrible!

Another thing I got to appreciate was how a simple idea could get you more money. Honestly, I never imagined I would see a tip-jar in a restroom. Maybe if I hadn’t seen it work in this case, I might not have been able to wrap my mind around giving tips to a janitor in the restroom. Regardless of whether it was her idea or not, she made the absolute best of it. She delivered her services in such a way that made sure this jar fetched her money. This restroom was so CLEAN! Coupled with her attitude towards it, I’m sure when people went out, they would direct others to go to that particular restroom and she would get more tips.

Working hard is not enough. It’s equally funny how it’s the simple things that actually have the most effect. If you want recognition, promotion, or more money, you must change the way you play your game. Add a little twist to what you do. Make it better! Be more positive about it, and don’t underestimate your ideas for improvement. Whether you get the reward immediately or later, I can assure you, you’ll be better than your counterparts. This janitor would probably make more money than any other janitor in her position.

I left that restroom challenged and motivated. I hope you are too. Enjoy the rest of your week.

Related Topics:Winifred Adebayo
Up Next

Onomarie Uriri: Life Is a Beach… Jump On The Biggest Wave

A Glimpse Into The World of Architecture in Nigeria! Watch Olajumoke Adenowo’s Feature on CNN’s African Voices