OfiliSpeaks: Of the Presidential Elections - The Role of Ethnicity & Other Questions Answered With Numbers 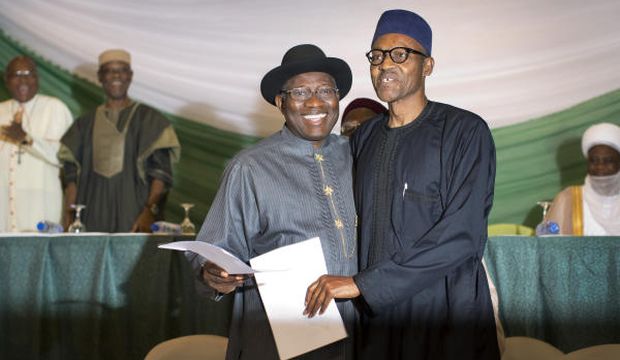 On March 31st at 5:15 PM, Nigerian President Goodluck Ebele Jonathan placed a historic call to Retired General Muhammadu Buhari to congratulate him on his 2015 Presidential election victory. An election won by exactly 2,571,759 votes.

Now it’s easy for that one number to get all the media attention … but there are several other smaller numbers that tell a bigger story and as an engineer I am addicted to the numbers. So I reviewed the data and observed several things such as the roles of Governors play in swaying votes as whether ethnic centered voting decided the Presidential elections.
Here are my findings below:

The Total Votes
Out of a population of about 180 million (per 2013 CIA World Fact book estimate) only 15.7% (28,278,083) of Nigerians participated in the selection of their President. On the surface 15.7% seems like a low number, but when you consider the fact that 44% of Nigeria’s population are below the age of 15, (ineligible voters) then the figure seems a bit more plausible.

In contrast, the South-West zone recorded the lowest PVC collection rate of 67.28% versus the national average 81.98%. The worst culprits where Lagos and Ogun state with a PVC collection rate of 65.25% and 61.53% respectively.
But South-West was not the only zone affected by low PVC collection, in the North-Central zone’s Abuja the FCT recorded a PVC collection rate of only 64.56%, this leads me to believe that the PVC collection rate was directly related to the transient nature of some states. For instance states like Lagos where housing is scarce would likely record more changes in residential addresses between 2011 and 2015 than other states in Nigeria – same as Ogun State, the educational hub of Nigeria where students temporarily set up residences till after graduation when they move to another location. And with most PVC pick up locations in 2015 tied to the voters original 2011 address, it is easy to see how this would have affected PVC pick up.

Where Did the PVC Collectors Go?
Across the nation 56,431,255 PVCs were physically collected as recorded by INEC. However, out of that amount only 31,746,490 people showed up to be accredited which is a turn out rate of 56.26%. Which means that for every 10 people that picked up their PVC … 4 of them stayed at home or mysteriously disappeared. This is a very disappointing number. But this could be due to fraudulent PVC pick up’s that got exposed by the new electrical card reader system introduced by INEC.Or that like me people’s 2011 polling unit was different from their 2015 residential address and with restriction of movement during election it made it complex for them to vote. For instance, I had to stay in a hotel with my family to cast my vote in Lagos at a cost of N22,500!
The widest gap in number of collected PVCs versus actual votes was observed in the South East zone. Out of 6,621,541 PVCs collected only 46.21% showed up to vote …. Meaning 3,561,448 people with PVCs did not vote. Again it could be the electrical card reader system at work.

The Governor & VP Effect
The Sambo Effect: Although President Goodluck lost heavily in the North-West picking only 15% of the votes available in that region. In Kaduna he managed to pick 29% of the votes … doubling his average performance in the North-West states. This is likely due to the Vice President’s Sambo influence in Kaduna, his state of origin. Although sadly his performance was not enough to make Kaduna remotely competitive.

What of the Amaechi Effect? Unlike Rochas and Sambo, Rivers State Governor was not able to influence the results in his state. With APC getting only 4.37% of the available votes in that state. This could be because of the last minute shift of his deputy back to PDP … but the main reason is that Rivers state before the 1996 split to create Bayelsa was once the State of origin for Goodluck. And thus they voted heavily in support of him … which brings us to that word everybody dreads “ethnicity.”

Following that trend the bordering zones voted in much the same way. The North-East had 75.28% of their vote go to General Buhari, while the South-East had 87.55% of their vote go to Goodluck. The slant however being greater in the South-East zone. With 9 out of 10 people in the South East voting Goodluck and 7-8 out of 10 people in the North East voting Buhari.
The last 2 geo-political zones the North-Central and South-West  did not replicate the lopsided voting in the other zones. In both regions APC garnered about 54.92% of the votes while PDP garnered about 40.08% of the votes. This can be attributed to both zones not having any major Presidential candidates in the elections.

Summary
Nigerians largely voted along Presidential ethnic lines in this elections. However zones like the South West and North Central regions that did not align ethnically with any major Presidential candidate did not follow the trend. And this is promising for our democracy because it means that our Presidency cannot be decided wholly along ethnic lines.

For example if you swap the South-West and North-Central votes between Good-Luck and Buhari the final election result would be Buhari 14,140,129 and Goodluck 14,137,954 a difference of only 2,175. So on the surface people might presume Buhari won because of the large voting block in the North 18,160,946 versus the South 13,585,544 but Buhari won based on his performance in Ethnic neutral zones.

Lastly, the PVC collection in South-West was low for various reasons mentioned above. For all the magnificent work that INEC has done this year in revolutionizing our electoral process the PVC distribution will be their dark spot. It’s inexcusable that a state such as Lagos with 5,827,846 eligible voters will have only 1,678,754 accredited voters meaning that 4,149,092 Lagosians could not exercise their right to vote.

But again this is not to take away from the efforts of INEC who ran one of the most organized and transparent elections in Nigerians history.

PVC collection* numbers: http://dailyindependentnig.com/2015/03/11-million-voters-yet-collect-pvcs-inec/
*INEC’s number of registered voters for PVC collection and that reported on election day are different by 1,411,501.

If you want to download a copy of the excel spreadsheet with all the voting data … feel free to download it at ofilispeaks.com

Related Topics:2015 electionsOfilispeaksOkechukwu Ofili
Up Next

Helping through Knitting! Noah Walakira is Building his Community in Uganda through Sweater Making | Watch