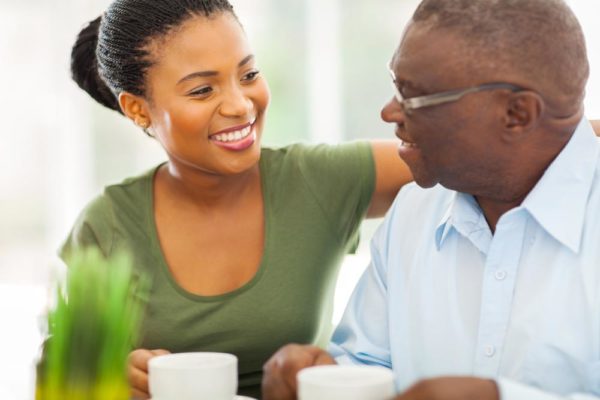 The BellaNaija family is a thriving community of beautiful souls. A BN Reader, who has chosen to be identified as ‘Miss E.O.A‘ read an article by Doc Ayomide and she was inspired to share her own story.  She narrated her experience of what it meant living with her father who was dealing with mental illness.

Please read on and be inspired.
***

I remember vividly spending Saturday nights watching Nigerian movies with my mum and dad. Those were the days of the VH cassette which had the advertisement intervals. Although many characters in those movies were always similar. One character that stood out was the crazy person. It was never gender specific. The script would tell the story of the ‘madness’ happening due to a curse, witchcraft or the persons wrong doings. Ironically the mannerisms of these characters would be loud, imbalanced and extreme. One moment the character was living a normal life, having fun and the next day his behaviour was erratic – eating things from the floor shouting at strangers walking around with no clothes.
Whenever those scenes would come up, I would feel really uncomfortable and glare at my father from the corner of my eye. I would intentionally start complaining the movie was boring if I felt the ‘madness’ scene was being dragged for too long. At that stage in my life my feelings were perplexed. What was being portrayed as a curse and a joke on TV is something I had come to understand was in fact an illness and my reality. Twenty five years later this illness is still part of my reality.

For as long as I can remember both of my parents have suffered from mental illness. No one ever spoke to me about it directly, or explained what it was, I just knew. However it wasn’t until I became a young adult that I desired to learn and understand the intricacies of the illness. At the age of thirty my father was diagnosed with what is now referred to as bipolar disorder. Bipolar is a serious mental disorder that is characterised by extreme changes in mood, from mania to depression. Between these mood episodes, a person with bipolar disorder may experience normal moods. The symptoms of the “Manic” mood are irritation, confusion, anger, talkative, reckless, feeling trapped, violence, lavish spending sprees. Whilst the “Depressions” stage reflects the opposite symptoms such as, sadness, crying sense of worthlessness, loss of pleasure, sleep problems, loss of energy or suicidal.

For those who are diagnosed with mild bipolar they are able to continue their normal life by regularly taking their medications with continued family support. Whilst in the case of someone like my father who has extreme Bipolar disorder the illness can drastically disrupt the regular patterns of life and requires the person to be monitored to ensure they comply with taking medication.

One would think after living with my father for so long I would have become accustomed to the illness. Living with someone who has bipolar at times can feel like sleeping next to a dead corpse. They are present in body but absence in spirit. For many years my father would only be well for three months of the year. He would then be admitted into hospital for the rest of the year. It becomes tiring and gruesome. You hold unto the happy moments knowing deep down it could all change at the blink of an eye. That is the painful reality with mental illness, it is unpredictable.
The last time my father relapsed I had to call the police to arrest him and take him to the hospital. His behaviour had changed dramatically and I was scared he would hurt himself. I had to hide when the policemen came as I couldn’t bear to watch them take him away. It felt like a blur, a week before we were planning his 73rd birthday party and discussing who he wanted to invite.

The Nigerian culture doesn’t always lend ears to difficulties like mental illness. Unlike other illnesses you can’t see mental illness. With the lifestyle we have in Lagos people’s erratic behaviour is often concluded as stress and bad behaviour. It is important we understand that going “crazy” is indeed a mental illness. It is not caused by a mother in-law or a wicked sister. Although doctors have not been able to conclude the direct reason for Bipolar disorder, it has been suggested that a traumatic experience can be the catalyst. Personally I agree with the latter. I have spent many hours grilling my father about his child hood and trying to decipher what occurred that could have caused him to become ill. At the age of seventy two, it was only six months ago that he finally opened up about the loss of his favourite brother dying when he was 18 years old. As I probed him with further questions he was reluctant to talk. However I kept pushing and he explained how his death was not spoken about and silenced within the family. His eyes shed tears while explaining the story.

No words could ever quantify the emotional pain and isolation felt watching ones father deal with a mental illness. However, this is my normal and it is all I know. My father is privileged to be in a position to live in a country where help and medication are widely affordable and available. Sadly many family members have cut him off for many years because they did not understand his illness. To them he was an embarrassment and a disappointed. But to me he is my father and the only love I know. I am not angry, for I know they did not know any better.
The next time you see someone not behaving normally, I hope you don’t look down at them but consider that this person maybe ill. As for that family member whose behaviour maybe embarrassing I pray you don’t cut them off, but consider trying to get them help. Have you noticed irregular behaviour in a friend, husband or wife? Consider talking to them to address the issue. That person may need to visit the doctor for an assessment. The sooner we become a community that learns to discuss things the easier it is to deal with mental illness. Mental illness does not disqualify, whether you are rich or poor. Fly in private jets or walk for miles. It can happen to anyone. To those who have a family member dealing with mental illness, please remember you have nothing to be ashamed about. You are not weird, or alone. Try and remember the good times. It is an illness that effects many people. Continue to shower that person with love and support. They need you more than you think.

More importantly to the new generation, my generation. I pray we become couples who learn and encourage their husbands and wives to talk about their feelings, thoughts and fears. I pray we learn to encourage our children from a young age to share and discuss their inner thoughts and emotions. Lastly I pray we create families with values focused on the importance of talking and communicating. Only then can we really be the Nigeria of change.

Omotola Jalade-Ekeinde & daughter Meraiah are the New Ambassadors for Knorr

Recreate These Spicy Fried Plantains – ‘ Kelewele’ & Stand a Chance to Win a Fine-Dining Experience for 2 at Yellow Chilli Restaurant!