Lize Shola Okoh: Riding a Bicycle For the First Time 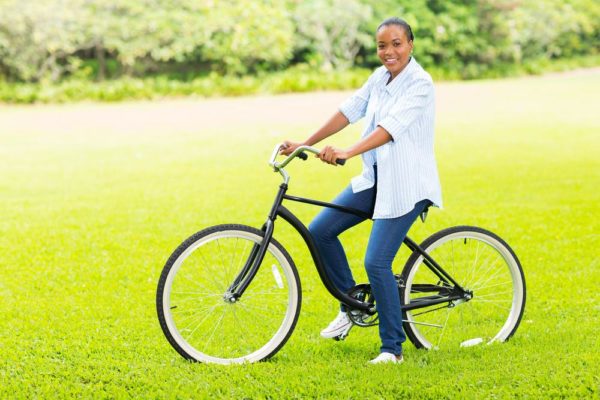 After all this time, I still remember the day I first learnt to ride a bicycle. It’s like a memory etched across my mind’s map – taking its place and tugging at my heart strings whenever I look back at that old picture of my very own first bike 11 years later.

That day was like any other. It was hot and humid, which was usual for that time of the year. I just got back from school, had my dinner and was ready to go and play.

Those days, I was a little tomboy and didn’t care for much. I had no airs or graces. I put on my shorts, an old t-shirt and ran up to the third floor to visit my friend. That was the pattern. Wake up in the morning, go to school, return and have dinner, quickly do whatever homework I had, and then play.

Play usually consisted of running around the neighbourhood backyard. It was either football, riding tyres, competing at high jump or any other sort that caught our fancy.

That day however, was to be different. I got to my friend’s house and was informed by her mother that she was already at the backyard.

‘What! Without me?!’ I had thought and ran down the stairs all the way to the backyard.

I got there and alas! None of my friends were where we usually hung out. It didn’t take me too long to find out. The commotion, or at least, that’s what I thought, at the close just before ours caught my eye. I could feel the energy in the air, something was brewing.

I paced over, curious to find out what was going on, and there they were – not just the one friend, but the whole clique.

“Come on, where you dey since? You need to try it too!” My friend beckoned.

From what I could see, it looked like fun! None of them could really ride yet, so while one sat and pedalled, three others, one at each side and another behind pushed all the way to the end of the close.

I learned that one of the older guys in the neighbourhood had bought bicycles and was renting them out. 5 Naira to go round the Close once, 10 Naira to go round twice, more for half an hour and so on depending on how long we wanted to rent the bicycles for.

Of course I was going to do it. I had always wanted a bicycle but never got one. So that was my best bet yet!

I paid my 5 Naira and off I went! Screaming and laughing with excitement. Oh believe me, I was scared, but nothing beat the adrenaline I was feeling at that moment.

Luckily we were allowed a couple of more rounds, and by the end of that day, I was able to ride the bicycle half way around the Close without any help after the initial push. Needless to say, that became our hobby for the proceeding weeks.

So the routine became wake up, go to school, return and have dinner, quickly do my homework(and when I say quickly, I mean thunderbolt quickly) and then rent the bicycles for as long as I could afford.

Years later, finally at University, and with a bit of more cash, I decided it was time to get my very own bicycle – something that had been a childhood dream.

I found the owner of a fairly used bicycle from a vending site and booked a date to go pick it up. By that weekend, I was the owner of a beautiful burgundy coloured bicycle and in a ceremonious fashion, I named her Bertie.

I was proud, and even if it had taken me 11 years, I was no longer the little girl that had longed for a bicycle. I now owned one, and that was one thing off my check-list.

I rode that bicycle with a big smile on my face all the way back to my University campus which was an hour away. It did not matter that I hadn’t ridden for years, and was a bit scared of the cars that drove past. As they say, muscle memory kicked in, and I was happy, content, and all was good in the world. Really, I couldn’t have scripted a better day if I had tried.

To be honest, I had no important reason for a bicycle at that point in my life. I was living on campus and from my bed to lectures was only 10 minutes, which meant riding would take about 3-4 minutes. But I didn’t care, I got what I had always wanted.

Presently, I’ve had 2 more bicycles since then, but nothing beats that very first one; the joy it brought and the memory it conjures whenever I look at that picture of me standing beside it.

Now, I’m not saying that this experience is in anyway grand, however, it reminds me that it’s these little moments, these little dreams and wishes that we sometimes forget as time goes by, that often matters the most.

They transport us to a time past, a time we felt innocent and at our best, and reminds us that we’re still alive and should give life all that we’ve got!

Have you had a similar experience, or any special memory that leaves you smiling? Leave them below in the comment section!

Have you Got Cooking Skills? Register to Audition in Knorr Taste Quest Season 3 | Grand Prize of N5 Million to be Won!