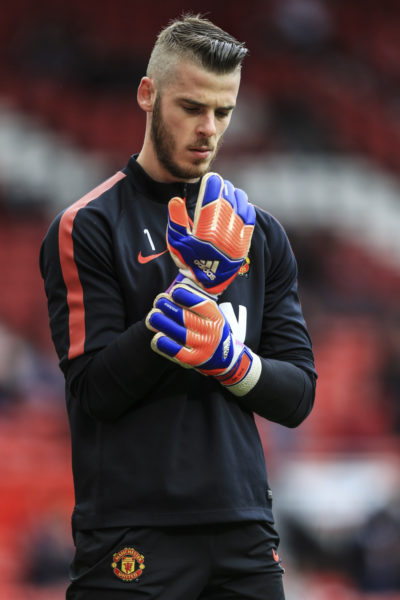 Before you make your decision to either stay or leave Manchester United, you need to do a little reminiscing and soul searching. Remember that you were relatively unknown until the club introduced you to the world. Remember your first season when your confidence was so low you couldn’t hold on firmly to almost every crossed ball and everyone made a mockery of your talent. Remember how your confidence used to fail you so much you spilled Phil Bardsley’s feeble shot into the net in the final minute of extra time at the Capital One Cup semi final 2nd leg. It was Manchester United’s game against Sunderland in 2013/2014 season – a mistake that was a catalyst for the eventual exit of Manchester United from that competition. There were other frequently occurring embarrassing goofs that characterised your first and second seasons. In spite of all of these failings, Alex Ferguson and David Moyes still kept faith in you, even when there was a better goal keeper on the bench at that time. In the midst of all these, you won the English Premier League title in your second season (2012/2013), though ably assisted by Anders Lindegaard, the 2nd choice goal keeper.

Imagine what would have happened to your confidence, your fitness and your overall performance if you had been dropped and left on the bench for 2 straight seasons after your protracted shaky start in your first season; you wouldn’t be the world class goal keeper that you have become now, making jaw-dropping saves with your palms, arms, legs and body. Real Madrid wouldn’t be willing to break the bank to have you on their pay roll. You probably would have ended up frustrated on the bench and gone ahead to sign for a mid-table team anywhere in Europe just to get playing time.

Reports say your decision will have nothing to do with money; if that is true, then you have successfully put passion before pay, which is commendable. However, Manchester United has believed in you through your difficult times in goal; it is only fair (though nothing seems fair in today’s football) that you avail them your highly rated and excellent services for at least one more season – as they regroup, rebuild and strategise towards finding their way back to being one Europe’s power house in football. Your decision to leave at this crucial time might be a cog in the wheel of that progress, owing to the fact that you were the “best actor” in Manchester United’s “Top Four movie” this season. You played your role so well even rival club managers still commend you.

It is also worthy of note that you were Manchester United’s Player of The Season in the 2013/2014 campaign (an award you might end up winning again this season), so I urge you to sign a new contract, stay back and give this team’s defence line some measure of stability and one more shot at making a statement home & abroad.

In my opinion, one more season is the least this football club deserves from you. But if your heart is no longer in England and is calling for home, please kindly move on. Like the saying goes “If your heart isn’t in it, your mind isn’t on it”. If you stay back on that premise, it could be catastrophic for your career and for Manchester United.

Best wishes, from a concerned fan.