Sodas & Popcorn Movie Review: Thy Will Be Done 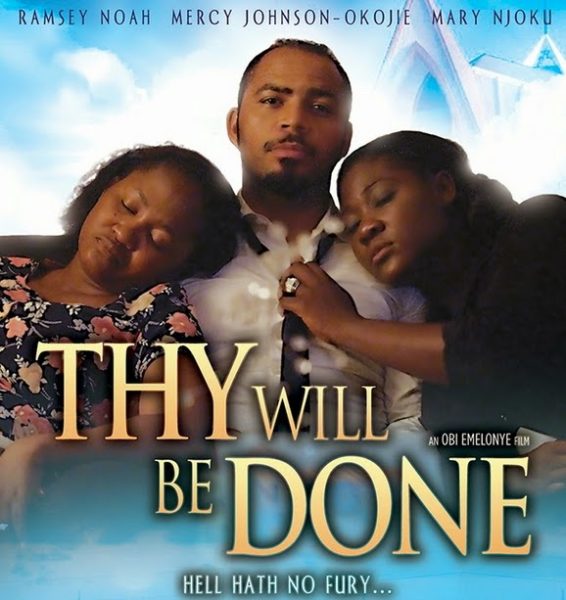 Sitting in the cinema hall, not knowing what to expect, I brought out my phone and opened the “To-Do” app. I was going to write down all the flaws I noticed. When the credits started rolling and I looked down at my phone, and all I had managed to put down were two lines; one of them was a quote I thought would be really cool to start a review with. Yeah, the movie was that good.

Thy Will Be Done is a romantic drama that tells the story of Pastor Pius (Ramsey Nouah) and his wife (Mercy Johnson), who have their lives turned upside-down when the pastor’s first wife (Mary Njoku) who was presumed dead, shows up seven years later. Caught between the devil and the deep blue sea, Pastor Pius at the risk of losing everything, must make a decision and quickly too.

The best thing about this movie is  probably the screenplay. In an industry where we are always being taught that all Uncles are evil and every step-mother is trying to kill, you, Thy Will Be Done, delivers an original story that captivates and sizzles. It’s a story anyone can relate to. While watching it, you are asking yourself what you would do if you were the one in Pastor Pius’ shoes (you’ll see what I did there after seeing the movie).

One of the criticisms of the ‘old Nollywood’ was that they all had to contain one religious act or the other. As a result, many of the ‘New Nollywood’ movies tended to avoid religion in their stories all together. With Thy Will Be Done, Tobe Osigwe carefully addresses a spiritual topic in a way that appeals to even an atheist.
Funny one-liners are something we associate more with Hollywood, but this film was able to pull them off seamlessly. No joke felt out of place, and at the very least, you are bound to smile.

Obi Emelonye finally gets it right with this movie. The story is told in a smooth and seamless way, such that the viewer is not left trying to fill holes. Every scene has its purpose and every shot added beauty to the overall story.

The idea of sex scenes in movies is to let the viewers know that the act happened, and not show them the act itself. With this film, Obi Emelonye has set the tone for how sex scenes should be shot in a society as conservative as Nigeria, especially when it comes to these issues. The entire film contains a couple of sex scenes, but apart from each being important to the story as a whole, the director pulls them off in a way that reveals very little, but you are satisfied you just watched a sex scene.

No matter how good a story is, or how much experience the director has, if the actors don’t portray the story well, the movie is bound to fail. The three lead casts in this film-Ramsey Noauh, Mercy Johnson and Mary Njoku- did superb jobs.

The viewer could feel every emotion they were going through. I was especially impressed with Mary Njoku. It’s been a while since I saw her in a movie. I might be wrong, but since she got married, she hasn’t done much acting. On this film, she jumps back effortlessly and you wouldn’t know she has been off the scene for a while.
It seems, however, that the producers put most of the budget for actors into the lead characters only. While the lead characters might have been really good, the same cannot be said for the supporting act. Many scenes involving the supporting casts left me cringing.

I read somewhere that Lagos is anything but beautiful and to a large extent I agreed. After seeing Thy Will Be Done, I had a change of heart. The movie had beautiful aerial shots of the city that had me falling in love with it again. I’m not sure if it was the picture quality or the shot composition, but the film contained beautiful shots of the Lagos the media won’t show you.

From Sodas & Popcorn HQ, Thy Will Be Done earns a Popcorn & Soda.

Fountain of Life with Taiwo Odukoya: Respect in Marriage

Kevwe Uwisike: For the Children Coming After Us