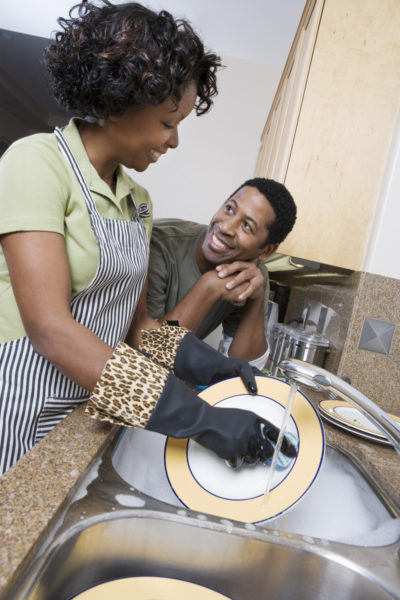 I come from a big family where my mother would always yell “Everybody, wash your plates after eating.” Of course, this instruction did not apply to my parents or to an elderly visitor as we knew better. So after every meal, my sisters and 1 would diligently wash our plates but we would wake up in the morning to still find dirty plates in the sink. Obviously, the culprits were not hard to spot as we, the girls, could tell that the boys had not obeyed the instructions. It was not just because we had not directly seen them washing their plates but also by the way food and finger marks were left all over their plates as if they had just returned from a warzone. Needless to say, arguments would ensue about who used the plates left in the sink and why. The lame excuses that we used to get included – I could not find the sponge; the water had stopped running; NEPA took the light and so I could not see; it was too late so I did not want to wake anybody up with noise; or ridiculous as it might sound, sometimes one would say “Oh, I did not know that we were supposed to wash the plates.” To each statement, we (the girls) usually had a befitting response. You see, we were very defensive as we knew that we would be the target of scolding if my mother saw the dirty dishes.

That was the annoying bit; even though she had made the dishwashing announcement, my mother never bothered about whether they were followed or not and after a while, I came to realise that what she really meant by “Everybody” in that first sentence was “Daughters”. Most of the time, our arguments were in vain as it did not matter if we showed her whose nails were similar to the scratches on the plate, who ate their meat bones in a particular manner, who usually never finished licking their soup or whatever level of proof that we brought forward concerning the ‘non-dish-washers’. Instead she would just reply “The time you used to play plate detective, you could have used it to wash the plates.” And so the task of plate washing usually fell on me as I was the youngest capable daughter at that time because my younger sister was too young. I would see my brothers smirking as I fetched some water in a bowl and began washing and sometimes, they would even stand by the corner pointing out spots on the plate that I had missed. I would be very pissed off, not because it was a difficult task but because I thought that the logistics (including other details I would not bother to list) behind it was unfair.

Therefore, I grew up with an aversion to unwashed plates which I am reminded of occasionally in my friendships or relationships. For instance, whenever I visit a friend’s place and there are dirty plates in the sink, I would complain or better still, start washing them even though I dislike the chore (for reasons explained earlier). Some of my friends have wondered if I have some form of OCD but far from it as many other areas of my life are not as organised. It is just the plate issue and come cold or heat, sickness or in health, I always wash my plates immediately after eating unless someone else has been self-designated to do the washing or there is a dish washer (in which case, I quickly load my plates in there). Regardless of the situation, the plates must not be left out dirty, in my opinion. It is much easier for me to complain or speak my mind with my friends and even help out because we are usually helpful to one another and very ‘sister-like’.

However, the problem is when this occurs in my dating life as I am never really sure about how to go about it. I could try to ignore the situation if the dirty dishes were in the guy’s house but when a fellow comes to my place, eats my food and leave the plates unwashed, I usually get quite irritated as I am reminded of my brothers’ smirks. I would not say that this behaviour is a deal breaker in a relationship for me but it certainly makes me wonder how the man was brought up and what other household chores he might not be willing to do. Eventually, I would begin to watch him more closely and of course, find more faults which make the possibility of the relationship being sustained to plummet. I have heard some people say that you should just tell the person directly what you want just as you would tell a friend. So I have tried that in the past and I have got a response like “Oh, I have not finished eating. I was going to get more food” even though the plate had been left unused for the preceding ten minutes. One time, I strategically waited for a while after he had finished eating and then asked if he wanted more food to which he declined, before I blurted out “So why is your plate glued to the table then?” Yeah, I know that might have sounded rude but I did not really care at that moment.

I have heard many men talk about how they desire to have a ‘homely’ wife with certain qualities such as cooking, cleaning, and childbearing abilities (I call them CCC) amongst many others. Therefore, a lady who does not do the dishes might be a relationship deal breaker for some men. Being a Nigerian and having had a similar upbringing, I can understand where they are coming from although I do not agree with some of the expectations people have. Yes, there may be some chores that seem more feminine or masculine but that does not mean that you should ignore them if you are able to do them just because you are of a different gender. This is not to say that dishwashing is a problem for only the men as I have already mentioned earlier that I know some females who act similarly.

However, my belief is “If you are capable of dishing out your own meal and feeding yourself, then you are capable of washing your own plates; so kindly do so.” In my mind, the solution might be for everyone to have specific plates which they would carry along (even as visitors) so that when it is time for another meal and their plates are dirty, they would have to wash them first. It is my hope to bring up my family in ‘non-gender-specific-duties’ way such that everyone is capable of doing all chores because I believe that while you may seek for certain qualities in a partner or friend, it is highly possible that the other party involved equally desires such a ‘homely’ fellow too.

Ogechi: 4 Steps to Take In Order to Protect Your Business Name