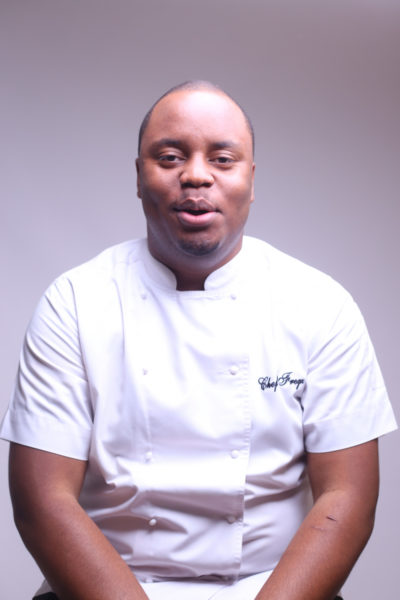 Growing up I was the child who didn’t choose what I ate. I loved/didn’t mind everything. It just needed to be sweet. When it came to beans my mother had always gave me straight up “ororo beans” – the type that had more ororo (palm oil in this case) than beans. Ice cold garri was a treat with it.

Smoked fish and good meat was a kiss from God as a child. Still in my young years, my other food hero, aunty Rosalind would also make beans. This time it was  devoid of the familiar dark amber overflow of stewed palm oil hovering over the beans like the black gold that was protecting the pebbled stones beneath. Then it tasted…. sweet. Not so much like the chocolate bars that she used to allow us after meals, but I couldn’t explain why it wasn’t my ororo peppery tasting beans. I was wondering why I was almost doing plate three! It had shrimps in it and this sweetness, I later discovered, was from copious amounts of coconut milk. It reminded me of the frejon my grandmother made for easter.

So in the past few weeks my mother had a kind of revival or should I say reawakening and it’s been this beans in coconut milk and oil free (well kind of) .

So the below conversation ensued…

Me: Mummy let’s collabo for my post on Friday

Mum: What is collabo?

Me: Let’s collaborate on my BellaNaija post this week

Mum: ehen? what are we cooking?

Me: I think that Aunty Rosalind’s beans you’ve not stopped cooking

Mum: Oya now give me the money to buy the things!

So, my contribution to this recipe was the prawn dodo stir fry sauce. I thought to myself what goes well with beans? The ultimate is DODO!

Plantain should have its own Hall of Fame and have other things like suya and what not be inducted into it. Anyway, plantain, I thought of gizzard or goat meat because of what I usually eat at The Place (fast food restaurant in Lagos best food yo!) But I remembered that shrimp taste and thought to chop up jumbo prawns in – as it’s really juicy. I  decided to throw in some onions and chillies and then it came to me… make it like giz-dodo. I added some glowing orange crayfish to the stir fry for added crunch and texture in the rather mushy dish.

The success of this dish depends on the type of beans you use, as well as the coconut milk. You can buy a canned one or make your own… whichever works. I recommend you use coconut creaand milk for an extreme burst of coconut flavour. You need to use “Ooloyin Beans” also known as Honey beans. There are varieties of this type of beans. You want to get the reddish one. Whichever one you get though, just watch out for the cooking time and how quickly or easily it softens. Mum made the beans with corn as corn is in season now… so she thought why not?

How To
Start by cooking of the tomato and pepper mix in the vegetable oil. Cook for about 10 minutes, then add the crayfish and seasoning.
Cook for another 3 minutes then add the corn, beans and the coconut milk. Turn down the heat and allow the beans to bubble away slowly for about 40 minutes. Check and stir occasionally so it doesn’t burn.
If you’re running out of liquid just top with a little water. I like my beans rather mushy so mum cooked it a little longer so it was just almost beans soup

If you’re using coconut cream be sure to get an even yummier taste!

Make the marinade.
In a blender, place half an onion, the spring onions, the smoked paprika, salt, black pepper, seasoning cube, olive oil, one chilli pepper, oregano salt and black pepper to taste. Make all into a paste and use 3/4s of it to marinade the prawns.

In a wide pan, stir fry some sliced onions, the tomatoes, and the tomato paste alongside the remaining marinade made. Stir fry till fragrant, and the onions have softened. Add the prawns and keep sautéing for about 10 minutes or till they start to turn a light orange. Top with the remaining onions, chillies, dried shrimps and plantains. Add a splash of water in case it’s too dried. Allow to simmer till the prawns are cooked through. Be careful not to overcook the prawns so they aren’t too rubbery.

Check for seasoning and serve. 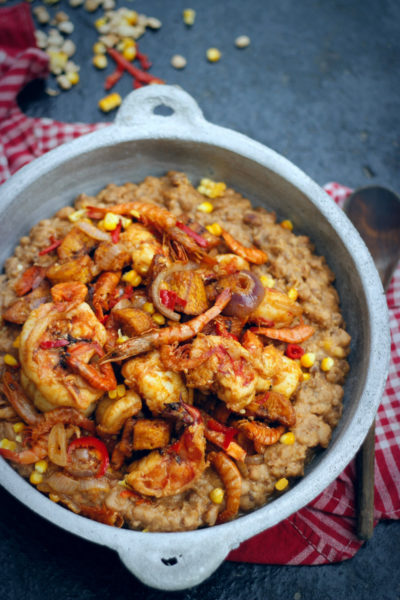 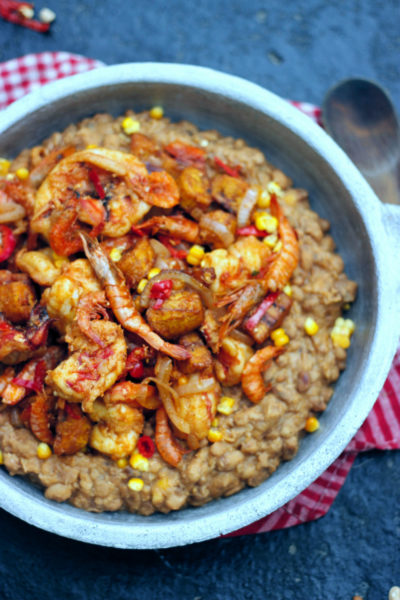 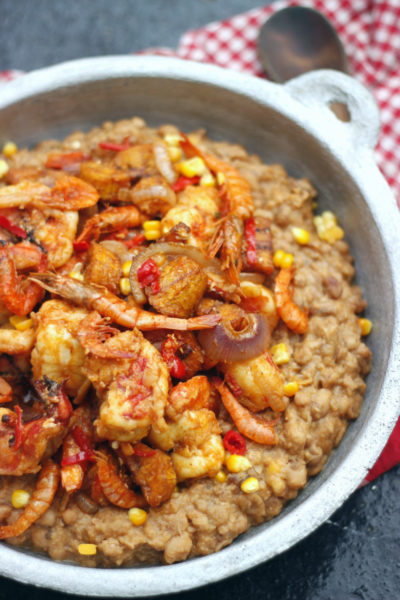 This dish is simple but so rewarding from a flavour point of view. Add more coconut milk if you like. It only makes it better.

Thank you for stopping by!