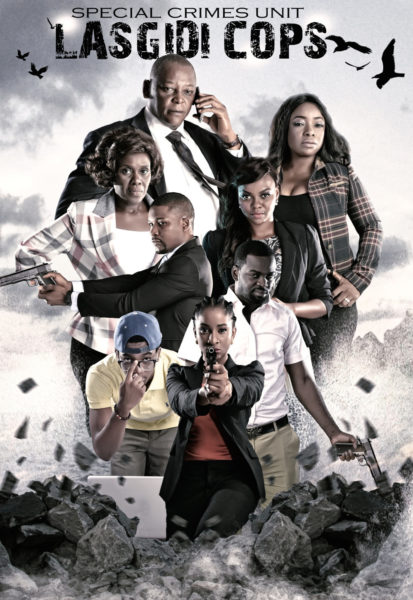 It would make sense to start this by asking if you are ready. Are you ready? Yes? No? Maybe? Well, whether or not you are, it’s here. A Nigerian crime-drama series has been shot and had its first press screening on the 29th of September. The series was directed by Ola with Yemisi Wada as the Executive Producer and Creator of the show.

The star studded cast of Lasgidi Cops: Special Crimes Unit is sure to become a permanent fixture in Nigerian homes and if for nothing else for the sheer intrigue of having a Nigerian series about crime solving.

Before eyes start to roll and the word ‘pretentious’ starts to fly around, I will make a case for the show, showing it for what it is and what it could be.

Starting by saying that the series is set in a futuristic Lagos is probably best. A lot of things make sense this way. Without putting that, it wouldn’t make sense if I told you that the police department had a login with information of all officers, tagged bodies when found and also used ipads and camera-equipped toy cars in raids. See, I already sound crazy. So when you do watch just keep thing ‘This is the future’. But the future still retains some things like ‘boli’ somehow we did not manage to erase the roadside grilled plantains and their vendors.

In the most populous city in Nigeria, organized crime has become a menace that has to be stopped. The police and their many attempts have been thwarted and it has become necessary for a special unit to be created. This unit is headed by Yinka Fadeyi (Bimbo Akintola) a middle-aged woman who is determined to clear the city of crime of all sorts. The Police Commissioner, Amina Halliru (Joke Silva) and the Deputy Commisioner, Dr. Francis Nwachukwu (Femi Branch) are not entirely supportive of the creation or sustainment of the special crimes unit and this much is seen early in the series.

The team is led by the tough, straight-faced Timi Akerele (Wole Ojo) who is the typical no-nonsense leader we have come to expect from crime series. Efosa Osewedo (Kelechi Udegbe) is the sometimes clumsy talkative in the team whose skills in obtaining information are unparalleled on the force. Amaka (Adesua Etomi) is ‘The Chameleon’, the specialist in undercover cases. The last member of the team is the whiz Hakeem Alli (Olumide Oworu) who is basically the go-to guy for hacking or anything remotely scientific.
Another important member of the cast is the investigative reporter Asake Jones (Kehinde Bankole) whose love for the truth and good journalism gets her in trouble with the members of the special crimes unit. Mr Clarke (Keppy Ekpeyong-Bassey) is the lawyer for the terrifying cartel that plans to own Lagos.

With all things there are two sides. Being a huge leap in uncharted waters, it is only to be expected that Lasgidi Cops: Special Crimes Unit comes with its fair share of items on either side. As bad news is usually best served first, I will do just that:

I Read Your File
Despite the attempts of the producers to point out that this is ‘not some CSI stuff’. It was quite evident that it was in fact, maybe not entirely, but a little ‘CSI-y’. There is what I call the ‘I read your file’ line. The brief moment of verbal/mental jousting that two detectives engage in to prove their dominance over the other because there is some tension. Example: First officer says “You graduated from here and you broke your leg when you were six. I read your file.” The look on the second officer’s face would be one of mild surprise and extreme cockiness as he/she too recites what they had read up on without forgetting to end with “I read your file.” This scenario just screams cliché and points at not so subtle information dumping.

A Little Too Much
Overacting is like a red blob on a white shirt, everyone sees it. If there was something to note as ‘close to cringe-worthy’ it would be the occasional scenes where an actor, in an attempt to ‘bring emotion’ to a role, mucks it all up. This occurred a few times.

Give Us More Spunk
Underacting is in many ways like overacting except in this case, you risk losing your viewer’s interest. Lacklustre performances by individual actors tend to dull even the liveliest action scenes. Like having Michael Cera be Michael Cera in a shooting scene in Transporter. In short, few scenes where there should have been some emotion, there was a shocking absence of it.

Unnatural Dialogue?
This part irks me a lot more than the others. I find myself screaming “nobody would say or do that” at the screen when a conversation between friends starts to have the feel of something ‘other-worldly’. It is important that the viewer finds a piece of real life even in a ‘futuristic setting’. Actions and discussions ought to feel natural to the actors. I say the actors because the truth is, the viewer can always tell when a conversation feels out of place for a particular actor.

Pros: Now that you’ve had the equivalent of a tooth being pulled out, here’s some chocolate:

Production/Picture quality
In this category, a lot is to be commended. First, aerial shots. Aerial shots dotted the episodes and I must say, they were breath-taking. It showed the beautiful city in all its colour. The calm and chaos of Lagos captured from a bird’s eye view is quite refreshing. Picture quality, as I have come to expect from ‘new-age’ series, was quite good and I have my fingers tightly crossed that we, as an industry, will not ‘backslide’.

Comic Relief
Following the success of a few Nigerian series and movies, one thing is to be extablished, the Nigerian people love to laugh. The classification of a series as a ‘drama’ notwithstanding, little hijinks and antics that cause anything from cracked smiles to roaring laughter, are appreciated. Lasgidi Cops does this subtly and this is a big plus.

Beginning Montage and Theme Song
A montage and theme song, for those who know, are fundamentally very important for any show. Lasgidi Cops has, for the lack of better adjectives, a dope montage. The theme song, although the tune escapes me now, I remember noting as interesting.

Attention to Detail
From research on techy terminology used by Olumide Oworu in his role, to the meticulous journalism portrayed by Kehinde Bankole’s character, we see a recurring evidence of work put in by the writers in making this ‘futuristic Lagos’ as ‘authentic’ as possible.

Attacking Societal Issues
From the presence of Joke Silva as a female Police Commissioner to a few other societal issues tackled in the series, Lasgidi Cops, while creating an almost ‘ideal’ Lagos, brings to light several key issues in the society, one of which is rape. This approach taken by the production team put the series in the right place to pass across the right message to the viewers and ultimately change the society.

Suspense
If I was to give nothing to Lasgidi Cops, I would have to give it props for the clever use of suspense which is to be expected from a crime series.

It would be cliché to say that the list goes on, but it is impossible to get into details of all the pros and cons. However, one thing is sure, Lasgidi Cops: Special Crimes Unit is something to be watched out for.

Get ready for an experience, see Lagos like you’ve not seen it. Granted, it might look the same, but several things change. We await the launch of the series but until then, are you ready?

Edwin Ikenna Madu is a Nigerian writer born in the city of Lagos. He writes short fiction, poetry, features and articles. His short stories and poems have been featured or are forthcoming in the following: Naijastories.com, Africanwriter.com, Brittle Paper, The Kalahari Review, Jalada: Languages Anthology and Per Contra. His features and articles have appeared in ThisDay and Crystal Magazine. He blogs at www.mytheoryoflife.wordpress.com. In 2015, he was one of the selected participants at the Farafina Trust Creative Writing Workshop. He is currently working on a short story collection.