Busayo Oderinde: An Ode to Chicken 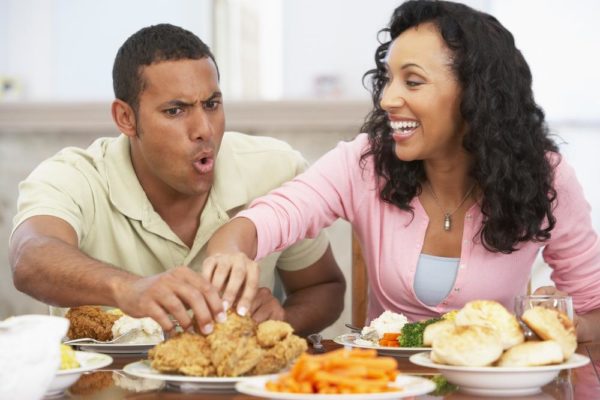 “Thank you for the protein
I know you burn when you are steamed
You make me smile when you are on my plate
I love you like a fat kid loves cake
We had tough times together
Winter, Spring, Summer and Fall
You always conquered all of my heart
I don’t know what I will do without you
Your quality of meat is extravagant, true
You beat beef
You overpower fish
You taste better than pork
You are my favorite dish
An ode to Chicken“. – Author Unknown.

Chicken is the most prominent food of our era, it easily crosses multiple cultural boundaries. Chicken has a mild taste and uniform texture that provides an amazing blank canvas for the flavour pallette of any cuisine.

It is believed that chickens were first domesticated in India thousands of years ago, primarily for cockfighting and later for meat consumption. Later chickens spread to other parts of Asia, Africa, Europe and eventually the Americas which were brought in by the European Colonists.

Chicken has inspired contributions to culture, art, cuisine, science and religion over the years. Chicken has cut across the globe and it is now this amazing story of evolutionary, agricultural and culinary success.

If you don’t even want to acknowledge Chicken as this icon that it is, respect it for its by-products – eggs. Don’t let me start on that. What would the world be without eggs? I can’t even imagine it.

Chicken is powerful in such a way that it transcends from a culture and nationality and becomes the culinary staple or pride of another totally different place. An example is the Chicken tikka masala, an Indian dish. It is the most served dish in British restaurants. In fact a new generation of Britons believe it is a national dish.

KFC, the franchise created by a Southern American, Colonel Sanders has over 3000 branches in China. It is more profitable there than in America, and the average Chinese person who lives in the city believes the selections in their local KFCs are authentic Chinese cuisine.

Let me quickly state here that chicken is the ultimate comfort food. What is more comforting than watching a movie with a bucket of Crispy KFC Chicken. I digress.

In America, the popular General Tso’s Chicken, deep fried chicken dipped in a hot chili sauce was created by a Chef Peng, a hunanese immigrant. There are so many more examples of successful transitions like this.

Let’s examine the health benefits of chicken, shall we? Chicken is a rich source of protein, which builds muscles and keep our bones healthy. It reduces the risk of bad cholesterol accumulation and certain types of cancers. It helps with weight loss, control of blood pressure and common cold.

Did you know eating chicken relieves stress? I know, I was shocked also. It contains tryptophan and vitamin B5, two important nutrients that have calming effects on the body. I personally think the great taste releases happiness inducing properties. So when next you are stressed, grab a chicken dinner.

Chicken also helps curb PMS, it is rich in magnesium which helps regulate those dark moods. Good news right? Guys, when next your lady is in that mood you can’t decipher, go buy her some chicken. Chicken also helps men’s sexual health. It contains zinc which regulates testosterone and boosts sperm production. Who knew?

Now to our or my Nigerian chicken story. When I cast my mind back to my childhood, chicken was not as popular as it is now. It was a celebratory dish eaten on special occasions like Christmas, New year, Easter, Graduating from a class, passing exams, dad coming back from a trip, mum was happy etc.

And when we ate chicken back then, it was always fresh, well almost always. It was either killed in our backyard or it was killed in the market. On some rare occasions, mum bought frozen ones from UTC, a defunct superstore. Paired with Fried or Jollof rice, the happiness was complete.

Chicken is a nostalgic, evocative dish. Most people I talked to said their most prized chicken memories were from their childhood. Till date, in a tiny part of my brain, chicken is synonymous with festivities. Who remembers eating Chicken peri-peri? The grilled chicken in a spicy marinade, I remember we had them at parties or the rare occasions we dined out at hotels.

The advent of Quick Service Restaurants like Mr Biggs and Chicken George(now defunct) increased the popularity of the dish. Other ones to crop up were Sweet Sensation, Tantalizers, Tastee Fried Chicken etc.

In my Uni days, I was a fan of TFC, I loved all their chicken offerings; barbecue, pepper, crispy, they did chicken right. I also loved Barcelos, Nando’s flame grilled chicken (they were here for a minute, its actually Chicken peri-peri and this is a Swahili dish), Chicken Republic’s Grilled chicken. I have said it once, I sank a tidy sum into these Eateries.

My best recent chicken memory was at this restaurant where it was called Chicken Escalop. The dish they served was actually Chicken Kiev – Chicken breast breaded and stuffed with butter and garlic and cheese. Escalop, on the other hand, is chicken breast tenderised by pounding it out with a mallet and shallow fried. Whether they made a mistake or not, I still have daydreams of this dish.

Thanks to our agricultural evolution in Nigeria, Chicken is more popular, easily accessible and budget friendly. Eighty percent of our consumption is locally produced, the amount of birds these local poultries churn out is quite high and its a profitable venture. But it has still not overtaken our consumption of beef, we are still very traditionally attached to beef unlike our American counterparts; did you know that America consumes about nine billion pounds of chicken every year? Mind blowing.

As great as Chicken is, it does have controversies. There was this controversy that Big Food Franchises like KFC and MacDonald’s had farms where they were growing six-winged , three or four feet chickens because they were feeding the chickens all sorts of hormones to make them grow faster so they could keep up with demand. Rumor had it…

In Nigeria, it is the recent bad hype connected with frozen chicken, most especially the ones that come in through Cotonou. Rumor has it that they enbalm these chickens like they would a dead person. I also saw firsthand how chickens were handled at the border, it wasn’t too appealing but we cook our meats well and on very high heat so I guess that helps. It depends on where you buy from though, I know most superstores source from local poultries. And always feel free to ask anyway, its your money and your health.

Controversy or not, you have to agree with me that chicken is the business. Fried, grilled, roasted, baked, boiled, stewed, steamed, stuffed, rolled, put in a salad,sandwich or casserole, whatever way you want to create this masterpiece, its delicious, evergreen and therefore deserves our respect.

Love and lots and lots of chicken

A Peek Into the Life Of… Creative Director – Chuma Obum