I have been asked a few questions about this subject recently. Some people I have spoken to do not see any reason why they should be bothered about their genotypes. Some can’t even wrap their heads around it. I am not a medical personnel but I will try to explain what I can, I will also provide links where I found useful information so you can do some research on the subject. Please correct me where I may write something that does not add up 🙂

I remember being taught in Biology in Senior Secondary School about the composition of genotypes, that stayed with me and this may be a little Biology lesson but it is worth reading.

First of all, genotypes are genetic make ups of cells. Some of the genotypes that exist to my knowledge around the part of the world where I am from are: AA, AS and SS…I have heard of the C hemoglobin but it is not very popular. Anyway, with the C, there are AC and SC (not sure how it works).

Now if we have two individuals with the following genotypes who choose to have children, the genotype composition of the children could turn out to be as follows but these things work in no particular order.

This is simply a high probability of likely genotypes. Charts would have been ideal for this illustration but in order not to cause any confusion, basically, take the alphabets one by one from each genotype and match alongside both of the other.

That’s the order, you could match others following this example.

However, I know of a family where both parents have the AS genotype and all their children except one out of five have SS as their genotypes. Only one happens to have the AS.

Another family with both parents as AS started with SS then the other two turned out to be AS and AA.

In all of this, the major thing to note is the Sickle Cell anaemia.

According to the U.S National Library of Medicine, “Sickle cell anemia is caused by an abnormal type of hemoglobin called hemoglobin S. Hemoglobin is a protein inside red blood cells that carries oxygen. The fragile, sickle-shaped cells deliver less oxygen to the body’s tissues. They can also get stuck more easily in small blood vessels, as well as break into pieces that can interrupt healthy blood flow. These problems decrease the amount of oxygen flowing to body tissues even more.” 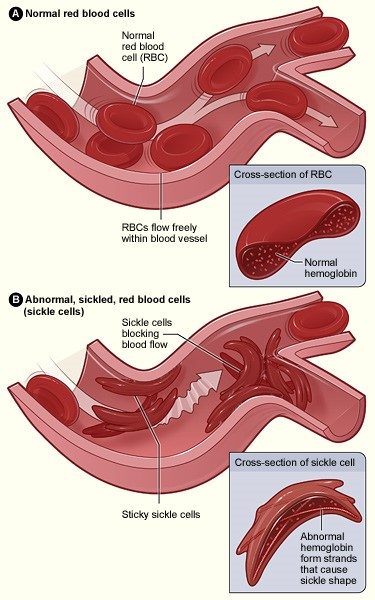 The AS genotype happens to have the sickle cell trait but the individual hardly suffers the effects from sickle cell anemia. If at all, very mild.

“Sickle cell disease is much more common in people of African and Mediterranean descent. It is also seen in people from South and Central America, the Caribbean, and the Middle East” – U.S National Library of Medicine. I recently learnt from a French friend that people in North of France and in Italy also have sickle cell anemia and he went on to give me some statistics.

I know of people who died of sickle cell anemia and I have watched a few of my friends in pain from it. I lost one last year. It was painful; very painful, because we all thought she had passed the age (there is a belief that when you go past a certain age, you are unlikely to die from the sickle cell anemia).

We have more access to information today so it’s advisable for people to check. Adults are advised to find out what their genotypes are and that of whoever they may be dating, so that they do not have to suffer having to call off a  relationship when it would have got to an advanced stage where both people may want to get married.

I heard of a couple who chose not to have children as both parties have AS as their genotype. They willingly chose to adopt but how many people can be as courageous? Beyond love, reason also has to come in. Not many people handle having a sickle celled child very well + bringing a child into the world to know so much pain when it can be avoided, is that very considerate?

I hope you, reading this, have checked?

Amarachi Okeh: Truth Lies in the Heart of a Child