Caleb Somtochukwu Okereke: For the Broken Ones Amongst Us 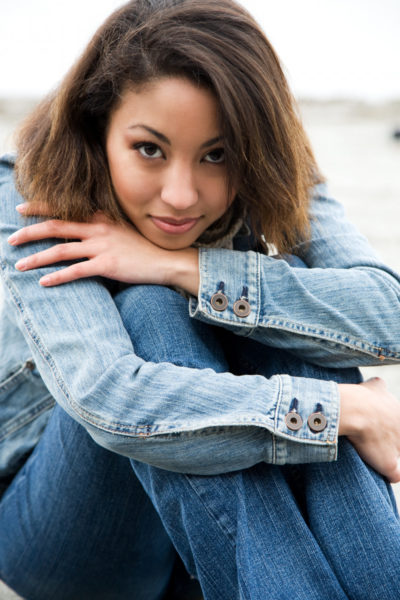 You are one of those girls that have to take countless selfies like one trying out clothes for a date with a long time crush, before striking the right pose. The first to rush to the camera in a group photo, and the one who replies your friend’s “Come and photo bomb” with an “I do not like pictures abeg”

Sometimes, you speak as if you fear the camera; as if the shutter sound reminds you of despair closing in on you, and its flashlight, prompts the fleeting euphoria that would always be your best spotlight. But it is not the camera alone you fear.

You fear the mechanic men at the end of your street who make jokes about girls and their swaying hips. You fear the bricklayer who looks at you “one kind” and the barber who says “Ukwu weru nti” when you walk past. You are afraid of the okpa seller to whose children you’ve become counsel about what happens to over-endowed people. But it is not a positive endowment, this one.

You first learnt it had a name the year you turned twelve, and the girls from your school were trying out sport wears. Yours had not fit, no matter how hard you tried and one of the girls had whispered to another “She is Orobo, fattie bom bom”.

Your life took a new meaning then. Things had to be bought for you in different sizes from others. People seemed to find it funny when you ran, and the girls in your school giggled about your size whenever you did something to offend them.

Now, you are twenty-something, and you still have this fear. You have tried to use Dr Ogwuike’s slimming tea which they say shrinks people in fourteen days, but for some reason it did not shrink you. Day forty-eight, day sixty, nothing. In fact, your excess consumption of milk only made you fatter. Then, you read somewhere in the newspaper about the Korean green tea with photos of robust people sitting beside photos of their wiry self after using the tea and captioned-BEFORE-AFTER. But that one did not work for you either.

This fear became regret, remorse laced with compunction before hatred. You hurl abuses at slim girls at the salon you make your hair in Owerri when they are not watching and frown at men who say they love women in slender packages.

“See them, front flat, back flat,” You say to your friend, when you are watching STYLE 173 and images of slender models with sharp collar bones like fists striding across the runway pop up on your screen “I can’t believe a man will love something like this O, tufia!”

Perhaps you are right, because when you find your own man, he loves you. Chukwuma, or Chukwu something, I do not remember his name. But you meet him at the Bus Stop on the morning you are wearing your new ripped denim and he looks at you for long before asking for your number.

“Baybey, can I get your digits?” He says and you dial it flippantly into his new Infinix Phone that reminds you of expensive cars, because you know he would be like the others who would request you to come to one Hotel inside town the next Friday.

However, he does not. He is different, and this is why you say yes when he asks that you be his girlfriend. With Chukwuma or Chukwu something, you find a new life. With him, you are complete. He is a foreman for a nearby building company, and on 29th, 30th or 31st after he has received his wages, he takes you to one joint inside town to eat Nkwobi, Point and Kill and drink Orijin.

There is something distinct about the way he loves you, for when you imagined the love of your life, he was a man who acknowledged your size but loved you perfectly, who did not care that stretch marks like incisions were sprawled across your skin.

But with Chukwuma or Chukwu something, things were different. He never acknowledged your size; he called you perfect and compared you to the pictures of slim girls on the cover of STYLE and ALLURE. He kissed the folds on your neck that sickened even you, and the first time you made love, he had looked at you with such passion you never knew existed.

You hated it; this deceit-it inconvenienced you.

Last week, I heard he left you, for some student in IMSU. Why? He did not say, he did not even formally break up with you, just ignored your calls and three days later you found him mulling over her at the same joint inside town and a table scattered with empty cans of Orijin in front of them.

Tomorrow, you say you want to hang yourself – that this life is too much for you and that you are not doing again. My dear, what will I tell you now?

Boy, no not you that looks sad, but you, yes you, the smiling one, come and sit beside me.

What was the last thing your Mother told you before she died? Was it not “You are a failure?” and that your folly was the reason she was lying inches from death on a hospital bed?

You can tell me anything, talk to me. Is it not you they said was confused about his sexuality? You they said that your sexuality was like the laces of shoes worn for too long, tangled and chaotic? Today, you want women; tomorrow you want men, the day after tomorrow you do not even know what you want?

I know you very well, your Mother and I used to be friends. I hear it is this mixed up sexuality that stopped her heart. I heard that when she heard the bank job you had gotten was because you let a top manager play catch and ball in your behind, she had looked in the mirror ten times, numb, before the stroke hit.

Was it not you she found a wife for three months before? The daughter of a top politician from her hometown? No tell me, was it not you? What will her in-laws say when they find out these things? What would her customers in the market say? I know these thoughts stopped her heart; they were the paper straws drawn to the devil’s lips to suck up all the little energy she had left.

Is it because you went to an all-boys school? Where I hear, boys marry themselves… Or because you like to experiment? It is fine if you tell me O, I will not tell a soul, I swear! But Boy, you need to talk about it.

Go back to what you were doing; let me not waste your time.

And you, you reading this, you that has a life, Do you think you have problems?

Money for the top contract, writer’s block, Money for rent, Money to marry, and Money for capital, that is all shay?

What is your problem? Please, as you pass by the broken ones today, and not sprawled on a mat begging for alms, or chasing after your car in traffic but in most familiar places- your office, your neighbour speeding out the driveway, your friend in church, say a prayer for them, move your lips, say a prayer, biko and then hug them.

Something NEW is about to Get Served…#TheRedPot