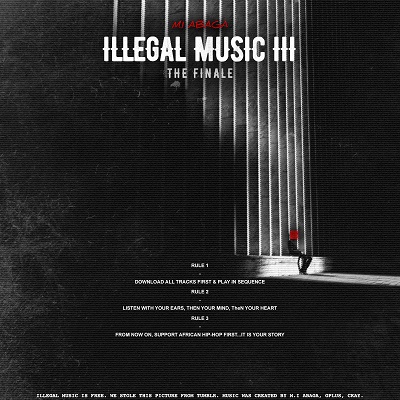 MI Abaga‘s music compilations have always been one to reckon with; most especially when it comes to the Illegal Music franchise. A body of work from the self-proclaimed ‘Chairman’, at any point in time, would always reiterate M.I’s importance to the music industry in its entirety.

Coming through with Illegal Music III, four years after the last installment, and an unending clamour for the return of the ‘only genuine platform’ that showcases M.I in his best form. It was very much necessary, in order to make up for ‘The Chairman‘ album; an album considered as ‘short of MI standard‘.

The 10-track compilation opens up with “The Finale“, a very soulful track that sets the tone for the tape in grand style. It samples one of ‘The Great‘ MLK’s powerful speeches – “What Is Your Life’s Blueprint?” – which complements the song largely, as M.I raps about how the rap game he helped modify was now a place where dissociation and discrimination now thrives, having been away for a while; serving a wake-up call to his colleagues in the game about the need to do justice with the music as he raps “..give them bars to set them free and not to build a prison”.

“Everything I Have Seen“, the only single released prior to the release of the tape, is an aptly titled song that M.I uses intelligently and brilliantly to take us through all his experiences in the game.  On “Black Bill Gates“, the third track on the tape, M.I enlists one of Africa’s hip-hop ‘heavyweights’ – Khaligraph Jones to record one of his best collaborative tracks ever, as well as an outstanding track on the tape. The guest verse from the Kenyan would go into the record books as one of (if not) the best verse on the tape, as he literally brought his A-Game to the table; no disrespect to MI’s thumping verse. MI creatively samples Beyonce‘s ‘Formation’ on the chorus, and the output is a great one, as he proclaims himself as a prestigious persona in the music industry as billionaire and business magnate – Bill Gates is to the world of IT.

“All Fall Down” featuring Poe poses as a masterpiece on the compilation, as both rappers took turns to place emphasis on the ephemeral and fallible nature of any kingship status or position. Poe came through magnificently (as always) as a flag-bearer of the new school hip-hop kings. It is one of the many reasons why you should not sleep on the guy.

“NotJustOk/Savage“, has the name suggests, is a two-in-one track that could easily be confused for a ‘diss track‘. It is a record that attacks music blogs, journalists or critics who attempt to critic, review or rate an artiste with the use of the stereotyped ‘Top 10 (Gifted/Hottest) Rappers’ list. MI raps unapologetically about how he does not “respect opinions” about his craft from individuals who do not know their onions. He also addresses individuals who ‘intentionally’ put out controversial ratings, articles or reviews with the ‘sole aim’ of boosting their platform ratings. He visited the very controversial ‘Lyricist On The Roll‘ category of the prestigious Headies Award, saying the criteria for winning the award does not favor the ‘new-school’ hip-hop style; following the unworthy snub of his 2014 comeback single King James from the nomination list of the award’s 2015 edition. That mashup of Burnaboy‘s Soke on “NotJustOk” is just awesome.

“Numbers” comes through as a self-appraisal track that sees the ‘Short Black Boy‘ caught up in the euphoria of his accomplishments. The sound here is different from the others; it is loud and fierce. “Head Of The Family“, on the other hand, restores the soft tempo of the tape. It serves a pledge of alliegiance to his label Chocolate City (CC) amidst the numerous and harsh criticisms that have come the rapper’s way following his appointment as the CEO of CC. The style and manner with which he conveyed his message is magnificent, and the Vin Diesel sample off Fast & Furious 5 complements the song largely. Also, his rendition of Beyonce’s “Hello” which comes after a disturbing pause is arguably the best rendition from a rap aeriste in like forever. The vocals are rich and the delivery is great.

One of the mixtape’s finest moments come on “The Box“, where he puts out words of inspiration and wisdom for the ‘next generation’ of hip-hop artistes. He advises that they take a cue from American rappers Kendrick Lamar and J. Cole, by putting out music that they deemed right and appropriate, rather than what ‘the system’ demands of them; as well as emphasizing on the need to ‘think outside the box’ in order to be great. The track features female rapper and label mate Pryse, who had a pretty decent verse, as well as singer/producer CKay, who was part of the entire production team.

“Sedi” serves an euology to some mystery lover of his, as he sings “I’ll never get tired of loving you“, as the mixtape is rounded off in grand style with “Remember Me” featuring seasoned vocalist and label mate Ruby. The track sees MI in a reflective state; one that is reminiscent of “Untouchable” off “MI 2: The Movie”. He reflects on the journey so far; his triumphs and victories and hopes they are what he would be remembered for as he raps: “the messiah has to die, so after my crucifixion, remember my contribution“.

With Illegal Music III, MI has done undoubtedly what no rapper has been able to accomplish in the Nigerian hip-hop scene. He has bottled conscious, dope and meaningful lyrics, with superb production and style, accompanied by a revolutionary gospel, in a 10-track mixtape that is available for free download; at a time when our hip-hop is in shambles, leaving in the shadows of South African hip-hop.

Also, the tape exposes MI’s growth as an artiste, as he did not in anyway attempt the “na me rap pass” style of doing hip-hop. No controversial track or line from start to finish, positive vibes only. Acknowledging his respect and admiration for the legends of the rap game like eLDee, Modenine, Ruggedman and Dagrin, as well as the ‘movers and shakers’, in persons of Ice Prince and Olamide, is something most rappers would shy away from in an already torn-apart industry; but he did that meritoriously.

At the end of the day, this tape is a wonderful body of work that lived up to it’s very high expectations, as well as re-affirming MI’s kingship status in the hip-hop game. It raises standards for every forthcoming hip-hop project, giving hope for Nigerian Hip-Hop and its lovers.

If I had to, a 9.5/10 rating will do for me; my school teachers were not entirely fair to me too.