Aviation Unions Protest Against Planned Concessioning of Airports by FG 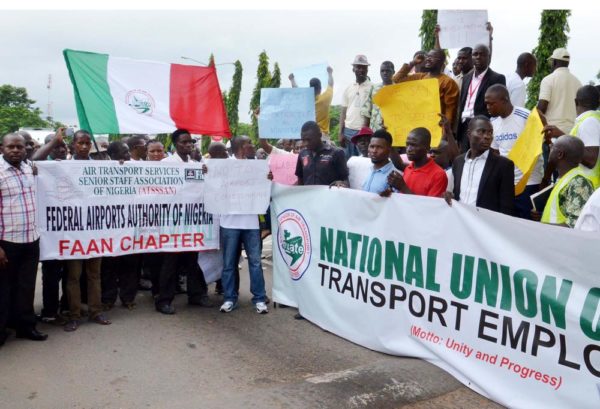 MEMBERS OF THE NATIONAL UNION OF AIR TRANSPORT EMPLOYEES PROTESTING AGAINST THE PLANNED CONCESSION OF AIRPORTS BY THE FEDERAL GOVERNMENT AT THE NNAMDI AZIKIWE INTERNATIONAL AIRPORT IN ABUJA ON TUESDAY (23/8/16).
5904/23/8/2016/JAU/BJO/NAN

Members of the organised aviation unions on Tuesday embarked on a peaceful protest at the Murtala Muhammed Airport (MMA), Lagos over the planned concessioning of four major airports in the country.

The News Agency of Nigeria (NAN) reports that the protest led to heavy gridlock on all the roads leading to the airport.

Armed policemen from the Domestic Police Station of the Airport were seen controlling traffic to ensure free flow of vehicles.

The protesters were seen carrying different placards with the inscriptions, “FAAN must survive despite its many enemies”, “Airport concession is economic terrorism”.

Speaking, General Secretary of ATSSSAN, Francis Akinjole, said that the workers would resist any attempt by the government to concession the four major airports

The union leader added that they were aware that some cartels were already making to ‘buy’ these viable airports.

He said the unions would not mortgage the destiny of over 6,000 workers of FAAN into selfish hands of few political cartel, warning individual concessionaire to stay clear of this ‘unacceptable’ deal.

NAN reports that the Minister of State, Aviation, Hadi Sirika, had assured Nigerians that the decision to concession the airports was borne out of government’s desire for effective and efficient management of the airports and adequate utilisation of the abundant skilled manpower in the aviation sector.

Sirika was speaking when he recently received the Management of the Infrastructure Concession Regulatory Commission led by its Director-General, Aminu Diko,who visited his office to present the ‘Commission’s Framework for Addressing the Development of Public, Private Partnership Projects in Aviation Sector’.

According the minister, the best way to move this industry forward is through the Public Private Partnership.