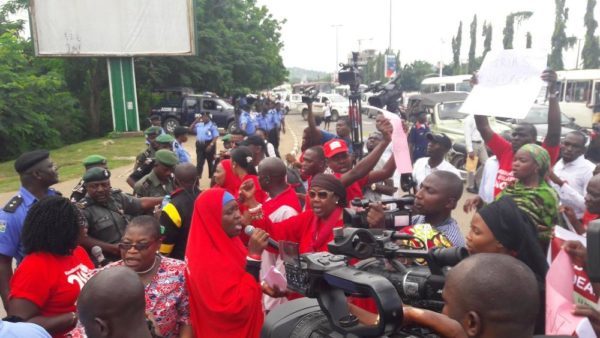 Parents of the missing Chibok girls have explained why they did not join the protest march that took place on Monday in Abuja.

Yakubu Nkeki, the leader of the missing girls’ parents who lives in Chibok, told NAN in a telephone interview that parents of the abducted girls based in Chibok held a meeting last week during which they decided they would not attend.

“All we want is our missing daughters and we are willing to work with anybody who will help us find our daughters,” he said, explaining that they did not want to antagonise the government which is in the best position to help them find their missing daughters.

“We do not want to do anything that the government will not be happy about,” said the women leader of the group, Yana Galang.

“We are not after any organisation that is against any party or religion, and we are supporting the federal government to help us release our girls,” he added.

The parents described the unpleasant experience they had during their last protest march in Abuja, when angry comments made by some of the activists who accompanied them to see the president irritated President Muhammadu Buhari to the point where he spoke sharply and dropped his microphone.

“Our own is that we want our daughters,” said Zannah Lawan, the secretary of the parents association.

“Anyone who has the ability to help us to find our daughters is the person we will work with,” Lawan added.

Aviation Unions Protest Against Planned Concessioning of Airports by FG

INEC Pledges to Remove Obstacles to Women’s Participation in Politics