INEC Pledges to Remove Obstacles to Women's Participation in Politics 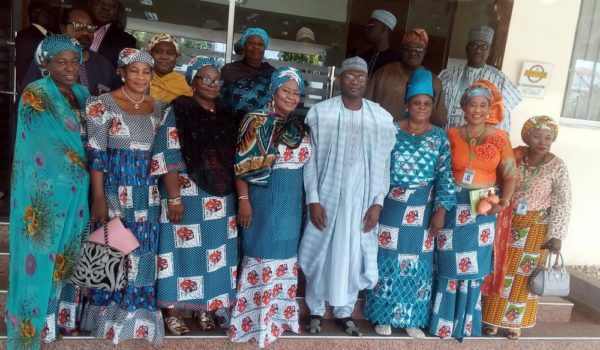 THE NATIONAL PRESIDENT OF THE NATIONAL COUNCIL OF WOMEN’S SOCIETY (NCWS), GLORIA SHODA AND THE OTHER EXECUTIVE MEMBERS OF THE COUNCIL IN A GROUP PHOTOGRAPH WITH THE INEC CHAIRMAN, PROF. MAHMOOD YAKUBU DURING A COURTESY VISIT TO HIS OFFICE IN ABUJA ON TUESDAY (23/8/16).
5934/24/8/2016/EO/BJO/NAN

The Independent National Electoral Commission  (INEC) on Tuesday said it was determined to improve on the electoral system to eliminate violence and other obstacle to women’s participation in politics.

The commission’s Chairman, Professor Mahmood Yakubu, made the pledge when he received the new executive of the National Council of Women Society (NCWS) led by the National President, Gloria Shoda, in his office in Abuja.

Yakubu said that democracy in any country could never be complete without full women participation at all level and condemned electoral violence against women.

“The issue of violence is a concerned to the commission, most especially against the already disadvantaged group, which is the women.

We will continue to improve to ensure that we remove all the obstacles to the participation of women in politics, including the issue of violence.

As mothers, you are also in another way bearing the brunt of violence.

In some of the elections, we have unfortunately lost some of our staff in the cause of serving their father’s land, and these staff members are your children.

We are committed to ensuring that never again should we witness such type of thing,” Yakubu said.

He appealed to political parties to consider involving women as candidates in all forthcoming elections.

Yakubu said that the commission had noticed that no woman was elected into the 68 elective offices in the last council polls in the Federal Capital Territory.

“We conducted 62 councillorship elections, not even one was a woman; not even one as deputy chairman,” he said.

He added that the commission was happy that one out of the 19 political parties contesting the governorship election in Edo had a woman as its candidate.

“We expect political parties to extend the same understanding in the forthcoming Ondo governorship and other forthcoming elections,” Yakubu said.

Earlier, the NCWS president said that political violence against women during elections was a great impediment to women’s participation in elections.

Shoda said while there were many examples of women being harassed, intimidated or even killed during elections, numerous other cases of women being attacked at such times were never reported.

She added that the act of violence against women during the election season should not be tolerated.

“As mothers, we abhor violence in general be it against men, youths, women and families in general.

NCWS takes it as part of its duty to raise its voice against electoral violence and appeals to INEC to support our voice.

If we genuinely want to see more participation of women in the political realm, electoral violence is an area we can jointly work hard at addressing.

We would like to seek your support with our public education and awareness campaigns and programmes targeted towards resisting this negative tool which discourages women from being active political players.

Jointly, we can resist the ungodly process of violence against women, which results in low participation and apathy in Nigerian politics,” Shoda said.

She also urged INEC to provide the council opportunities to serve as observers during elections in order to help gather data on any ill-treatment meted out to women.

“On the whole, such data will assist us with carrying the discussions forward with a view to proffering informed solutions”.