Whose Child is it in an Inter-Tribal Union? Blogger Verastic Raises this Interesting Topic About Nigerian Patriarchy 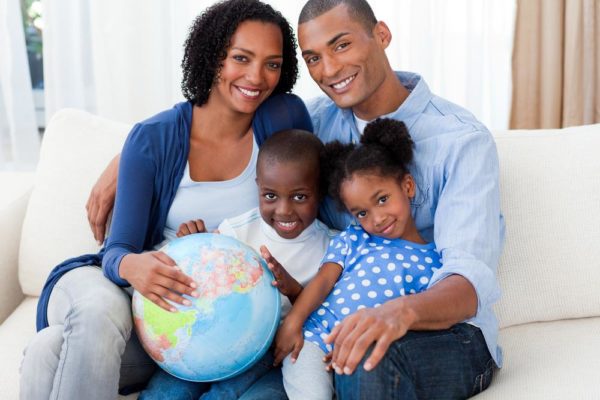 A BN Contributor sent this story to BellaNaija and I was quite anxious to get the discussion up and running as soon as possible. It is undeniable that the news of the results of the US Presidential elections has rocked the world, but we have to keep moving.

Nigerian Blogger, Vera Ezimora ( Verastic), shared this post on her blog. She talked about how she is Igbo and married to a Yoruba man. She noticed that people felt the need to tell her that her child is Yoruba.

“Yes, I’m Igbo. Yes, my husband is Yoruba. But now that we have a child together, Nigerians are telling me that my daughter is Yoruba. No, sir. No, ma. My child isn’t Yoruba. She is an Igbo-Yoruba girl.“

Essentially, she raised a very important issue that stems from raising a child when you’re in an inter-tribal relationship.

Nigeria is a patriarchal country, and children take their roots from their paternal line. So, if your father and mother are from Ondo and Oyo – respectively, you’re essentially an Ondo person. It’s the way things have been and nobody has sought to question it. Although there are a few exceptions in some parts of Nigeria where women ‘take ownership’ of their offspring.

In cases where both parents are from the same part of Nigeria, the issues of what to name your child, and other slight cultural nuances, may not really reveal the difference in parental origins. It won’t really be an issue if you’re someone like me whose parents are both from the same town, we can’t claim mixed-race. Same culture, same greeting, same food! Ahn ahn…Such a bummer! Imagine the world of variety you’re exposed to when you have cousins from different parts of Nigeria.  Parents from the same tribe in Nigeria don’t really have issues of whose culture should the child’s first name represent. Olajumoke Olatudun Onasanya.

However, where there’s a marked cultural difference like a union between an Efik man and a Tiv woman, then you start hearing stories like the one Verastic shared. To compromise, people start with things like the name of their child. Uduak Terungwa Iniobong. First name, father’s, middle name, mother’s and last name father’s lineage.

Verastic raised a point which my friend, Amina has always talked to me about with regards her children. My friend is Edo, married to a Yoruba man. Every time I ask about my Ibadan princesses (her daughters) she replies that her children are Wareke! It’s a running joke between us, where she asks me if I’ve ever seen Ibadan children as light skinned as my princesses.  We conclude that all of us are Nigerian and laugh it off – the only complexion that matters is the colour of our passport.

But Verastic’s post really gave me reason to think deep about preserving a woman’s lineage or cultural ways. If everything your child is instilled with should come from the father’s people, then how much of the mother is the child going to have? It may be said that the points raised in the post is presumptive and only gives cause for an unnecessary discourse – especially since with or without a child being given a name from his/her mother’s people, women usually (more naturally) pass on what they know to their child. So, for instance, my nieces are half Yoruba, half Tiv. Consciously or unconsciously, my sister-in-law is going to teach them the Tiv way of life, and general socio-cultural practices. It is immaterial that their first names are Yoruba. They will always be half Tiv, half Yoruba. I do not believe that it in any way reduces their Yorubaness, that their mother passes on what she knows and beliefs.

So, where is the problem in all of this? I believe that the problem stems from the people who feel the need to opine and question a parent’s decision on how they want to raise their child.

If I had a dollar for every time that people have said or implied that my child is Yoruba and that the Igbo in her is insignificant, I could buy myself that new gadget I’ve been eyeing. “Ah. No oh! This one is Omo Yoruba!” they laugh. Who is laughing with them? And when I introduce my daughter, Ada Verastic by her Igbo name, people are confused. “But I thought her father is Yoruba?”

Yes, he is. But her mother is Igbo.

People carry on as if I’m just her surrogate mother, as if my child does not have my blood, and as if I simply did Igwe a favor by helping him to carry his child (and now I’m here to also simply take care of the child for him). Long before I ever knew of the word feminism, I was already unconsciously uncomfortable with the [Nigerian] female narrative. I was – and still am – uncomfortable with being relegated to the back, simply for being female.

If I ever were to find myself with a group of astronauts discussing life as astronauts, I wouldn’t have anything meaningful to contribute to their conversation because I am no astronaut, but for the issues that concern me and/or my daughter, yes, I have a lot to say. I’m not raising a Yoruba girl.

Maybe it is because, as Nigerians we really don’t understand or believe in the concept of boundaries and personal space (real and virtual); or maybe it is because we strongly believe it takes a village to raise a child – and so we take this mantra literally and decide that it is imperative to scold erring young mothers who don’t know ‘our ways’. I do not know.

My Ugandan roommate has assured me that this is not a strictly Nigerian ‘problem’, although in Uganda, their style of naming children isn’t exactly following the paternal line – stricto sensu. They find an important person in the father’s lineage and BOOM… name problem solved!

In any case, let me open the discussion to the house, while I go find me some nice Canadian man to give me some nice half Rosedale- half Ogbomosho babies.

Great Lady: What’s So Bad with a Man Living in a House Provided by His In-Laws?

Tolu Ajiboye: All About Osteoporosis