Kayito Nwokedi: The Round Up of London Fashion Week Autumn/Winter 2017 Shows

Identity. It is something we sometimes struggle with. The pondering questions in our heads: Who am I? Where do I come from? What does it mean in the larger scale of things?

While American fashion this season was about politics and activism, the British designers were more concerned with their identity. Perhaps influenced by “Brexit” and what that means for the country as a whole, the designers dug deep inside to find out who they truly are. 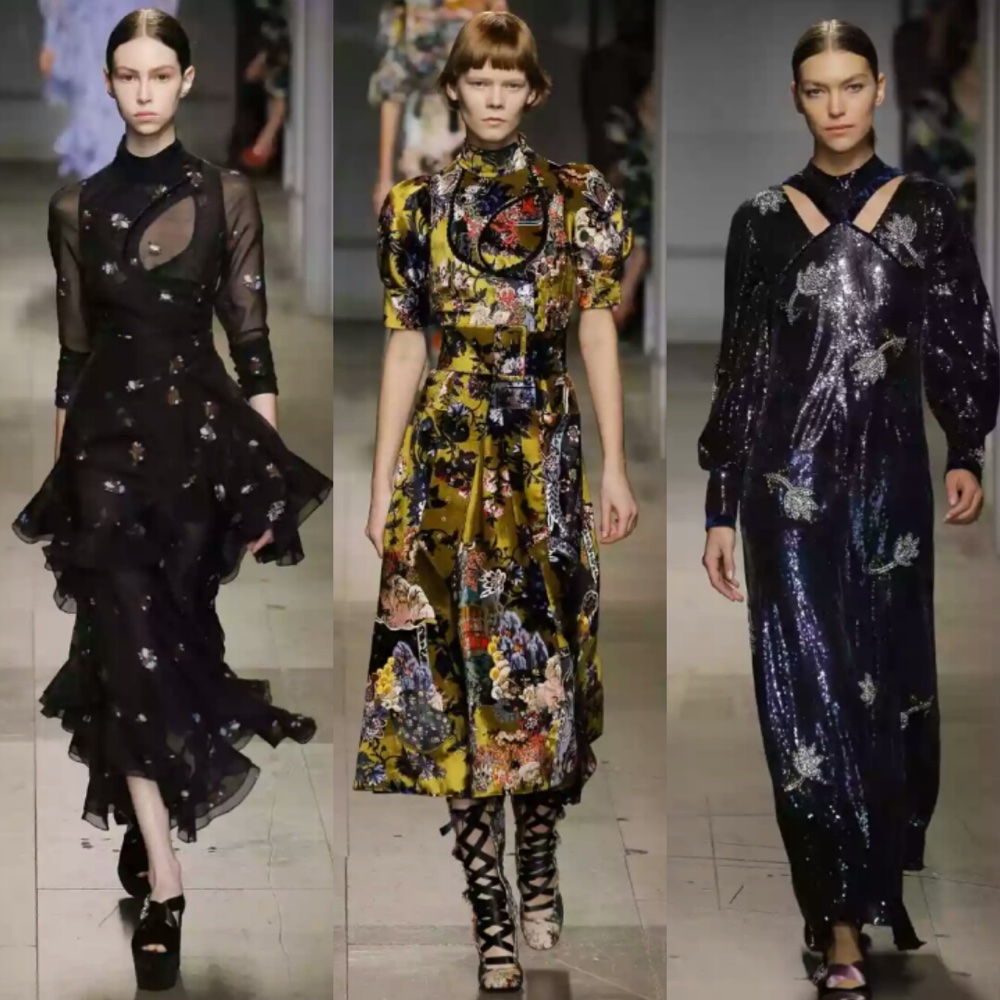 Amongst those searching for self, was Erdem Moralioglu of Erdem. His mother is British and his father is Turkish, but for this season, he mined his paternal roots. There were prints and silhouettes that could have come from the Islamic country of Turkey, but trust Moralioglu to put his unique spin on things like hand-embroidered paillettes and unique proportions.

David Koma who was born in the country of Georgia but grew up in Russia, took on a traditional Georgian war garment called Chokha and a dance called Kartuli and juxtaposed the two – a sort of mix between hard and soft, masculine and feminine. His precise tailoring, which is even sharper now at his current gig with Mugler, was softened with feathers, lace, and sheerness. 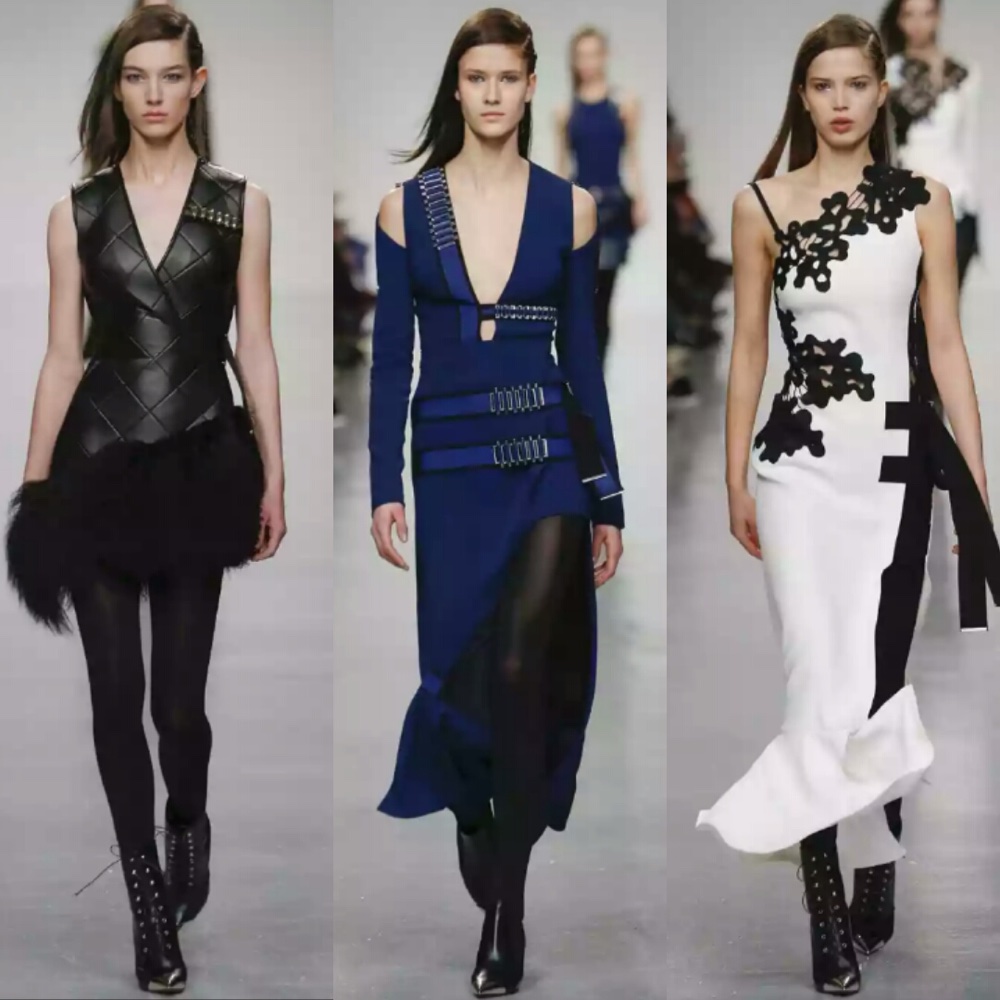 Simone Rocha, who is of Irish and Chinese descent, was also drawn to her roots. But for her, the connective thread in her collections is one in which women are celebrated. On her runway, the age range of her models were from the youthfulness of Mayowa Nicholas at 18 years old, to the graceful maturity of Actress and model, Benedetta Barzini at 73 years young. The clothes were a sort of feminine armor: coats in army green velvet with cross-body bags fashioned after military tailoring. 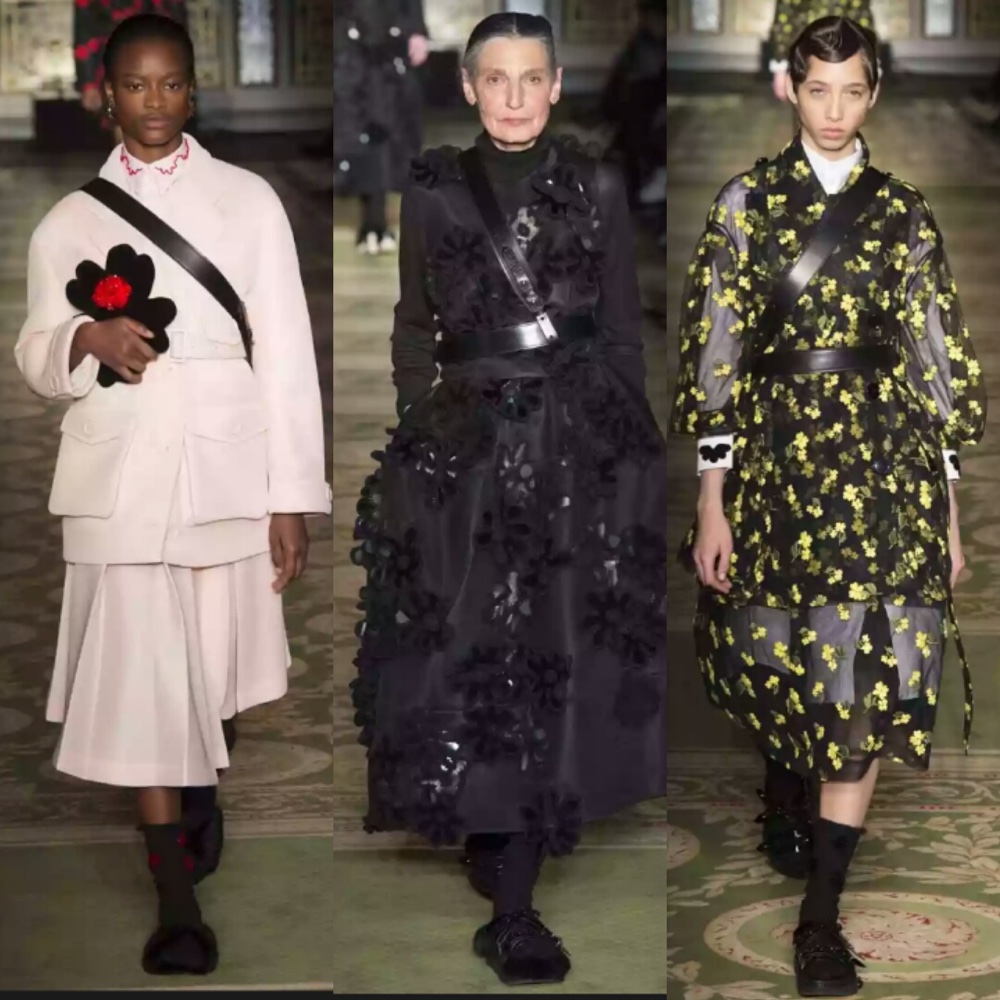 Just like Rocha, master of ideas, Christopher Kane, tried to celebrate women in his own little way. His own approach was to imagine women as factory workers, a job that is predominantly masculine. But in his hands, the theme was worked into a kind of edgy glamour: iridescent taffeta that was cut into roomy coats or sometimes pleated into midi-length dresses or decorating sack dresses with tons of flowers and sequins. The most literal interpretation of his chosen theme were the shoes that came decorated with strips of spongy foam. 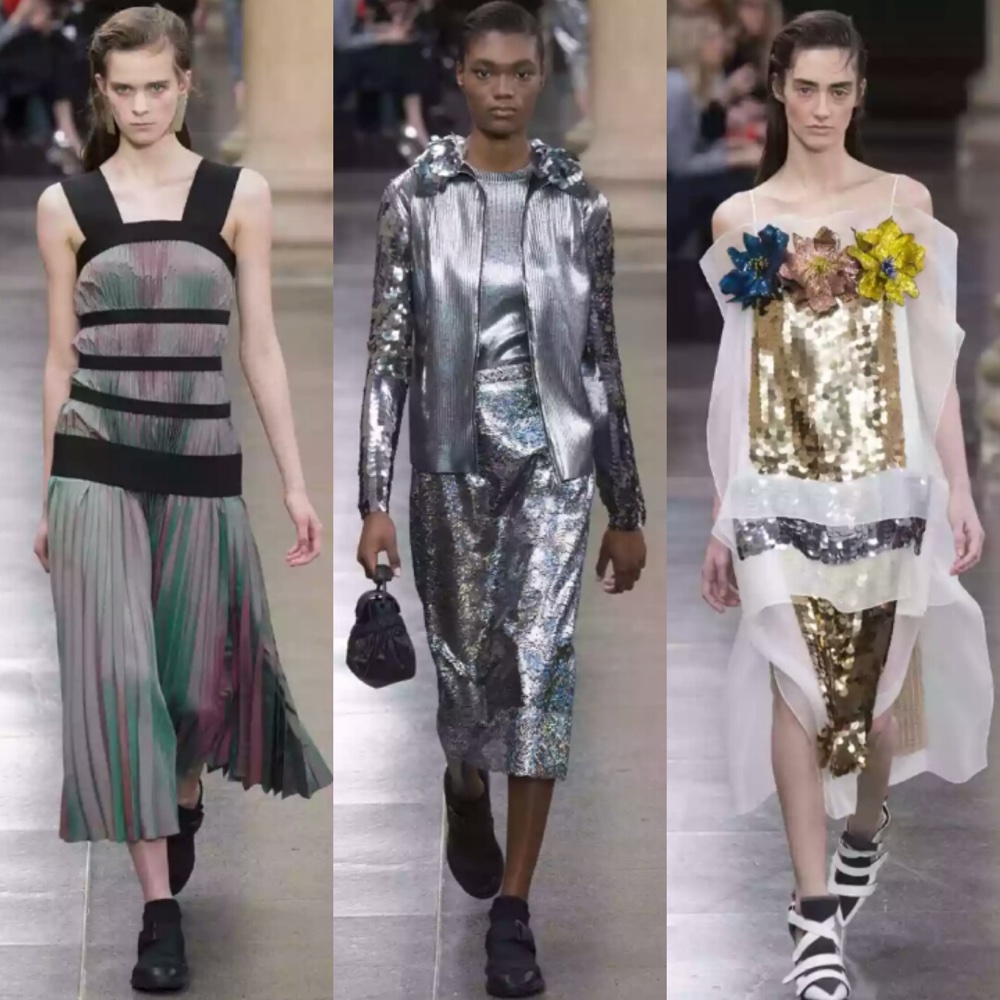 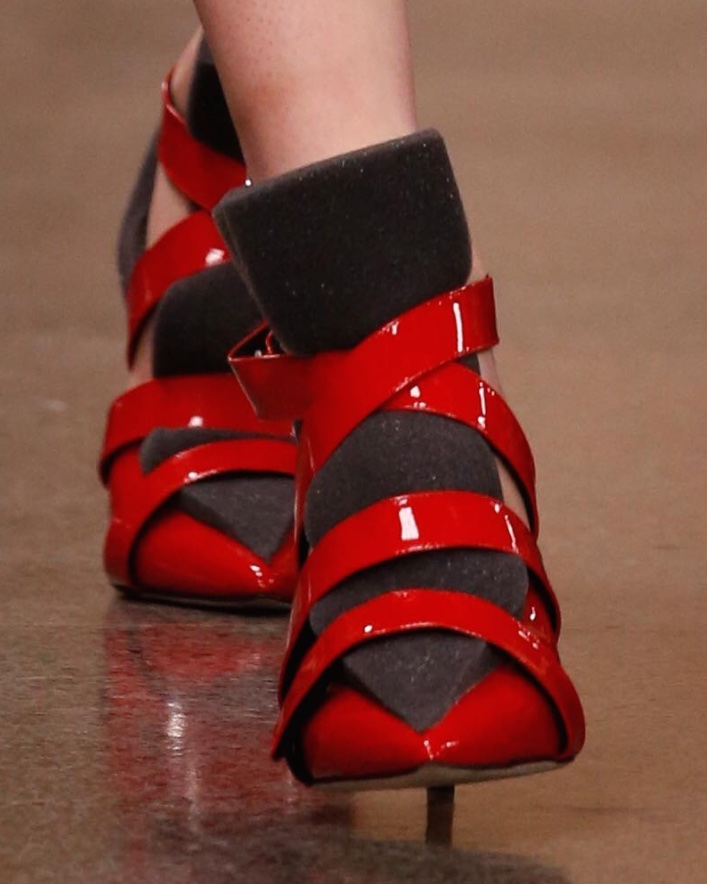 Adebayo Oke-Lawal of Orange Culture presented his latest collection under the fashion scout platform. The platform has launched a couple of top brands like Peter Pilotto, so it is sort of a big deal that he made the cut. (See the full collection here).

The collection, which Oke-Lawal called “pretty“, stayed true his androgynous aesthetic. He explained that the collection was designed to express male vulnerability and romanticism. According to him,

“as a Nigerian boy, you are not necessarily allowed to own hurt, even if it is staring you right in the face. It is a deeply rooted patriarchal system that invalidates pain as an essence to maleness”.

There are people in the past who have often criticized his clothes as unwearable or feminine (myself included), but we often forget his sartorial language is rooted in gender-fluidity. This collection was completely masculine with just slight touches of femininity: a ruffle here or a delicate print there. The rest of the collection was made up of velvet suits in rich colors like aubergine or sporty parka jackets in bright shots of lemon, not unlike what you can picture a regular guy wearing. It was probably his best outing yet. 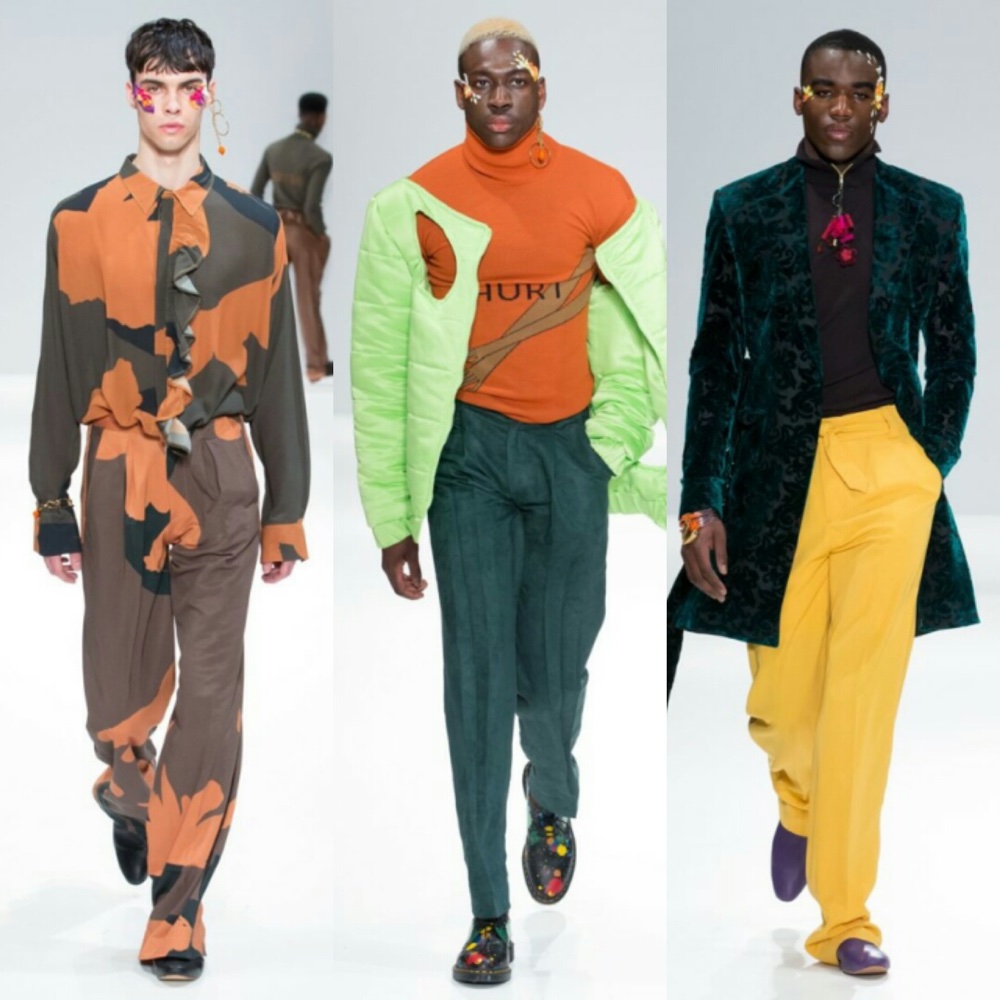 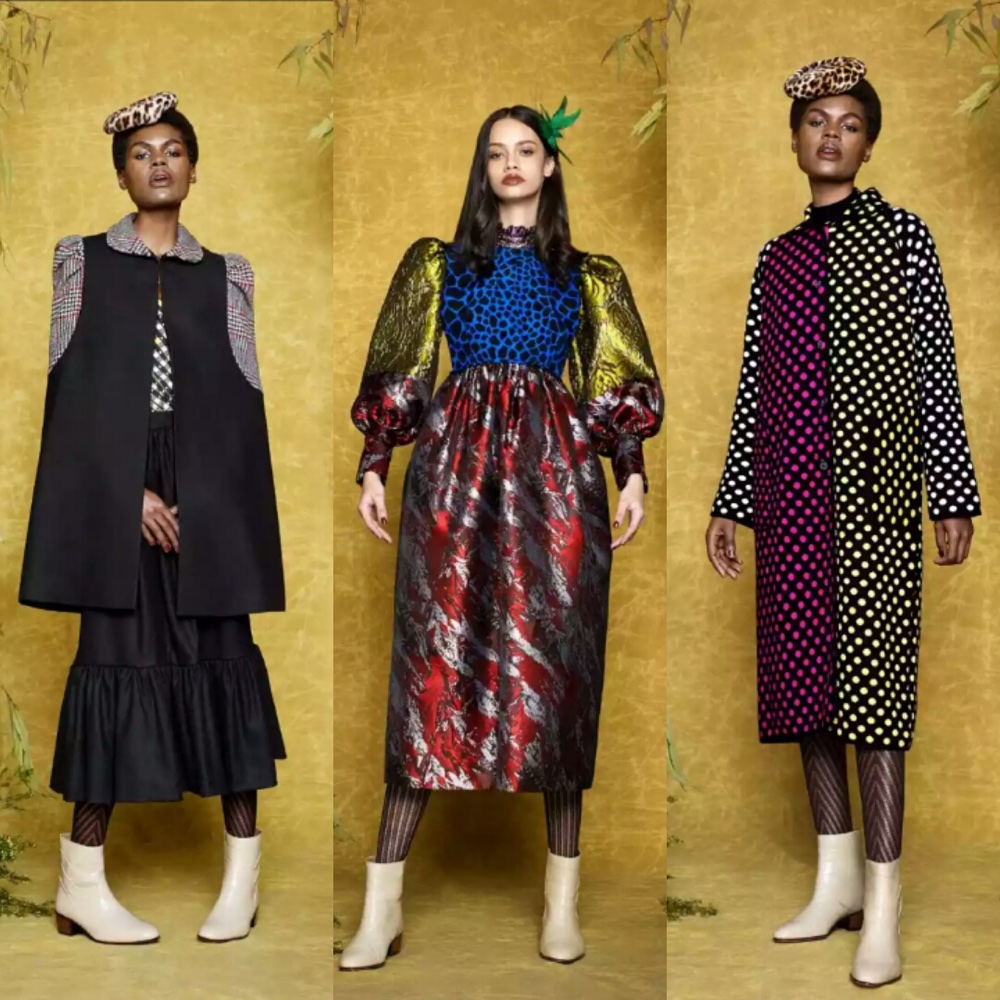 Another Nigerian export, Duro Olowu, who has been a regular fixture during London Fashion Week also changed it up a little bit. (See the full collection here).

Sure, the vibrant prints, the colors and the exuberant styling were all there, but newness came in the form of new shapes. There was more volume seen here than in any of his previous collections, and that came across (for this reviewer) as Olowu being confident to defy anyone who dares categorizes him (or his woman) as one thing.

That may be a lesson to us all. Why be only one thing, when you can be so much more?

Oris Aigbokhaevbolo: Rita Dominic Sinks with the Rest of ‘The Guest’