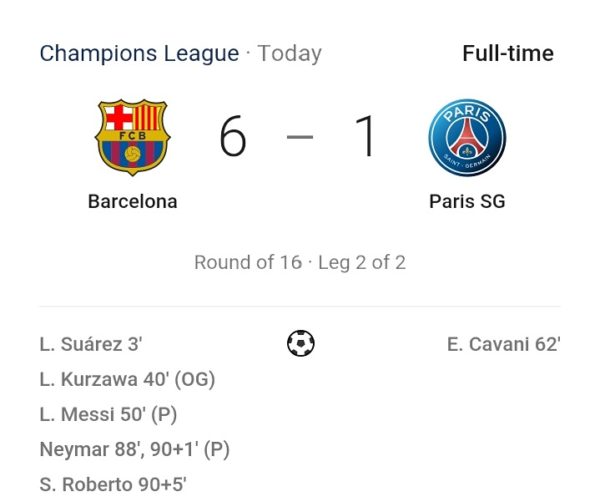 FC Barcelona has again proven that it has what it takes to become European Champions.

After losing 4 – 0 to French side Paris Saint-Germain, the team had little hopes of qualifying for the Quarlterfinals of the UEFA Champions League.

The team needed at least four goals without reply from their opponents before 90 minutes, to stand a chance of qualifying.

Barca quickly got to work, hitting the back of the net two times in the first half. First from Luis Suarez and another from Kurzawa.

Five minutes into the second half, Lionel Messi extended their lead by 3 goals.

PSG’s Edinson Cavani hit the net at the 62nd minute of the game, extending the number of goals Barcelona needed to qualify to three.

At the 88th minute, Neymar Jr scored for Barcelona, adding another one three minutes later.

Even with a 5 – 1 scoreline, Barcelona, would have steal been kicked out if not for a last minute goal by Roberto to guaranty the team a spot in the final eight.