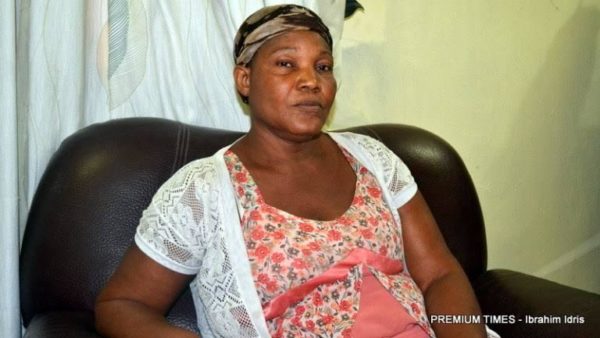 In an exclusive interview with Premium Times, Bukky, the mother of Stephanie Otobo, the alleged ex mistress of Apostle Johnson Suleman, the General Overseer of Omega Fire Ministries (OFM) Worldwide, said that her daughter has been brainwashed and is being manipulated by some lawyers as well as some of her friends.

She also said that she was not forced or threatened to go to Suleman’s church in Auchi to apologise and beg for forgiveness.

Recall that Bukky and one of her daughters had gone to Suleman’s church to ask that the cleric forgives her so that the case goes away.

Suleman had also said that he has forgiven Stephanie.

Stephanie had claimed that her mother was threatened and arrested twice.

See excerpts of the interview:

PT: You travelled to Auchi to attend a church service where you also apologised to Apostle Johnson Suleman. What prompted you to do that?

Bukky: I did that because of my daughter, (and) because I am a mother. The way I am seeing her is not the way I brought her up. And all those her character is not giving me happiness which I want to put an end to. That is why I went to Auchi.

PT: Did anybody threaten to arrest or kill you before you went there?

Bukky: No, nobody threatened me. It is because I am a mother. When I saw what was going on, the day you people came to the market I said I wanted to go and meet the man of God to apologise so that we can put an end to the matter. Because I know my daughter. I did not bring her up this way and the way she is behaving is not normal. So, I said I want to go and beg the man of God to forgive her so that this matter can die off. Because I cannot continue with this (and) the way I am seeing it, I don’t want anything of such to happen again. Nobody threatened to kill me or prompted me to do so. I went there on my own to apologise to man of God.

PT: I am asking because shortly after that church service, your daughter said on Instagram that you were threatened to go to Auchi.

Bukky: No, I was not threatened. I am a mother. I cannot continue to see her in that manner. She has been saying all sort of things. We are not happy and that is why I went to apologise. I went there alone; nobody threatened me.

PT: That implies that your daughter lied?

Bukky: Yes, because what she is saying is not true.

PT: Don’t you think your daughter is old enough to take responsibility for her actions?

Bukky: What I am still saying is that they should pardon her and the matter should just go down like that. They should forgive this matter because they’ve been manipulating her because this is not her real self. She was not behaving like this before. It seems all those lawyers are manipulating her, using her to say all this rubbish and bringing all this things out. So I begged that this matter should die down now because this is not my real daughter. I believe somebody must have been manipulating her. All those lawyers (and) all those her friends are using her. This is not the way I brought her up because I brought many children up. They are not behaving like this. Somebody is brainwashing her, polluting her mind and that is what is making her to do all this things that she is doing now.

PT: You are accusing a lawyer for doing that?

PT: Can you mention names?

Bukky: I don’t know them but I believe that all those lawyers supporting her are using her. I am begging the government that they should leave my daughter alone. They should release my daughter from what they are doing to her.

PT: Do you know the lawyer they call Festus Keyamo or any lawyer from his chamber?

PT: When the lawyers called you, what were they telling you?

Bukky: They asked me whether they came to arrest me or they forced me to say all those things when they came to my market. They also asked whether I was tortured. They came and said they want to ask me about my daughter, (but) I told them that I want to go and beg the man of God myself to die down the matter. That is what every mother will do. I don’t want to see my daughter destroyed. That is why I am saying that all those lawyers should leave my daughter and bring her out of this matter.

PT: You said you were going to beg the man of God, what were you afraid of?

Bukky: Well, we begged the man of God that he should forgive my daughter. You know when you call somebody a man of God, he can go to any length. So I don’t want the man of God to go to any length, to do any evil prayer because when we heard of it that time, this pastors’ association (South-South chapter of the Christian Association of Nigeria) praying all their sorts of things. I cannot sit down here watching my daughter like that. That is why I said I want to go to the source to beg that man. Nobody tortured me. I went alone. I entered vehicle from Sapele to Auchi.

PT: She (Stephanie) said Apostle Suleman held marriage discussions in the pastor’s office. Is it true?

Bukky: No, it is not true, nothing like marriage, I did not go there for marriage. No woman goes to collect dowry. That one na abomination.

PT: Did she ever tell you that she was pregnant?

Bukky: No, she never told me.

PT: Did she ever tell you that she was stooling blood for a year?

PT: So, when you heard about all these things, what was your first reaction as a mother?

Bukky: I really want to see that they bring my daughter back to me. I wanted her to come back to me that moment. I did not see her and that was why I said I was looking forward to seeing the man of God so that I can beg the man of God to forgive her (and) to cancel all this matter.

PT: Have you made any attempt to reach her so that you discuss with her?

PT: When she was growing up, what kind of child was she?

Bukky: She is not wayward, that is why what is happening is surprising me. Somebody is behind this matter because she was not like that before. She is a good child. She loved me and I love her. So, along the way, I don’t know what happened; that is why I said they are manipulating her, using something against her and I want every Nigerian to help me to pray, pray for her that God should deliver her.

PT: Do you know what she does in Canada where she lives?

Bukky: She was going to school before (and) she is a musician.

PT: Does she send you money?

Bukky: Before she dey send me money sometimes.

PT: Now if this matter goes to court, are you ready to go to court to testify?

Bukky: I don’t want to go to court, that is why I said they should cancel the matter.

PT: Do you know anybody who is against your child and who is polluting her against the man of God?

Bukky: I don’t know anybody. Na the lawyer wey make her dey talk all this bad word. The lawyer should leave my daughter alone.