Bobosteke: Much Ado About The Wedding Party 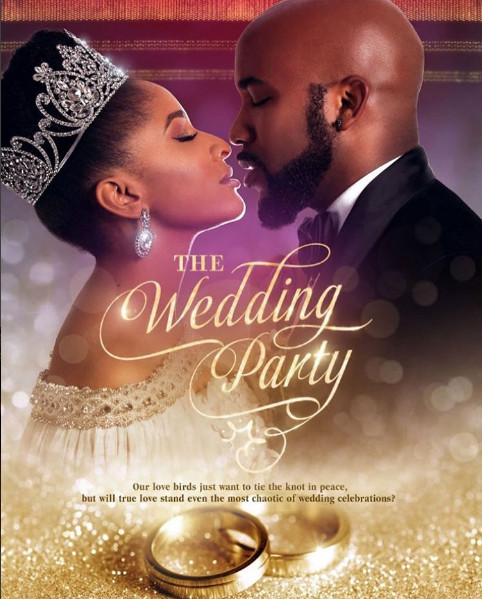 Yes, I know; I’m late to the party (no pun intended). But What. A. Party.
I laughed outright, much to the consternation of my host; and privately, to the annoyance of my phone. I’m sure, it (the phone), hisses whenever I click on the movie. I just skip straight to the scenes that improve my flat tummy goals and have fun.

It was funny, yeah; BUT, not without some (okay a lot) of avoidable slips. I scoured the Internet thinking someone would have written about them, but did not find any. If at all there are any previous reviews like this, I apologize in advance that my service provider did not cover the location of said review (is that even possible). If there aren’t, well, what do you know? It’s a first.

The following is an unprofessional review. Some people do this for a living and my attempt is in no way meant to be passed off as the real thing. These are just my observations. And I’m not not altogether unlike anyone else anyway; I just “watch” movies too.

1. The Biker
In the opening scene, a biker was delivering invites to the wedding to the bride’s house, where I-am-a-thief-not-a-robber- Lukman, happened to snag a copy after a near accident. Said biker arrived at Dunni’s house at the same time as Yemisi and Deardre with the package (invites). The question is why invitation cards on the day of the wedding?

2. The Date Debacle
When Yemisi and Deardre were making their way to Dunni’s room, they passed a guy carrying the wedding banner. The date on it was 23.03.16. Fast forward to the reception where Chief Felix Onwuka sent a message to “Small Chops” asking, “I thought I told you not to come?” The date on the message read Sunday, 10 July, 2016. I know, the devil is in the details.

3. Best Man’s Shirt
This may actually be in keeping with Ikechukwu’s character, “Shola”, who was portrayed as an irresponsible person, but his shirt was not ironed, biko. It looked like he slept in it the night before. It was an eyesore, because that scene was a close up and the shirt just covered the whole screen.

4. Staged
Tinu’s friends’ delivery of the line “We will show her up. She will know” was more suited for stage than for camera-is-shooting-now-now kind of movie. Likewise BamBam’s Yoruba accented English. The scene where he arrives to serve the ladies the drinks could, frankly, have been left out. Apart from the fact that Ali Baba’s performance was painful to watch and cringe-worthy most times, the Obas he reeled out, who were to be in attendance, did not appear anywhere in the movie. Also, the double (sl)tap he was about to give Obianuju on her back after Felix announced he would be taking a back seat in FINLAK Industries to spend more time with his wife, was unbelievable. Thankfully, the camera cut him off as it was about to land. I understand that he was to come off as the typical loud Yoruba man, but he should have just sniggered or something. That tap alone almost took away from the poignancy of the moment and destroyed the scene.

5. Faceless Friends
“Uju, you still look beautiful” whoever delivered that line must be a ghost because we did not see the speaker’s face throughout the conversation; although, one could in later scenes identify her (if one was looking to check).
Ireti Doyle’s classic stare and icy demeanour, in response to the statement, would have been a tragedy to miss. Her execution was beautiful. That look alone introduced us to Obianuju and taught us everything about her character. However, the camera should have given the utterer required face time.

6. Three Is a Crowd
When Yemisi and Deardre were haranguing Dunni over her wedding night attire, there were two girls seated on the bed and then there were three in the same scene. Also, the girls behind Yemisi, when they stood to catch Dunni’s bouquet changed twice, even though it was still the same scene. Continuity, people!

7. Time Travellers
The camera pans the church, showing there are people waiting for the Cokers’ arrival. It’s unfortunate that Harrison, who happens to be driving Dunni to church, is also seen seated at the church waiting for her arrival too.

8. Changing Faces
The guests at the high table changed with almost every scene. Right from when the Onwuka’s were dancing in, to when Tinu got up to look for her daughter. It was a festival of faces.

9. Slip-pers
When Obianuju excused herself from the table to go and look for the others, we heard her say “Excuse me.” The camera was on her face but her lips did not move. Same thing at the church when BamBam and his family arrived and she said “Finally.” Her lips moved to form the word but no audio.

When she arrived at the room where the other were being held hostage, Obianuju, who was wearing a gold coloured shoe earlier, was seen wearing a pair of black/brown slippers. If at all there would be a scene where someone looks different, the transitioning, or a reason for it, should be shown as well. It is not also in keeping with the icy queen we met at the beginning of the movie. Ireti Doyle’s character would have worn those heels to thine kingdom come, even if it killed her.

Lastly, when mum and son were speaking on the corridor, Obianuju’s bra strap had slid down her left shoulder. It was a see through blouse, (at least the upper part of it) and was obvious. Again, not in keeping with the character and an overlooked or unnoticed wardrobe malfunction.

10. Some More Love
Considering Obianuju’s patent dislike of Dunni, I think the scene where Dunni and Dozie arrived back in the reception after the video debacle should have been drawn out and perhaps a few words exchanged between them. The movie did not spare us Obianuju’s vitriolic, calling her, among other things, a house girl from Ekiti state. Some words should have been spoken to Dunni directly, apart from what she said to the Cokers, to encourage a total acceptance of her into the family.

11. The Meeting of Eyes…
This one is just between us, sha. That look exchanged between the co-stars from 1:30:43 to 47 was not Duns looking at Dozie but Adesua looking at Banky W. That’s the only way I can explain the look. Notice the thumbs caressing as well from 1:31: 9-12. I’m not one to speculate and contribute to public pressure. ‘Nuff said. (Update: Well this article was drafted some time ago. Adesua and Banky W now are engaged!).

Well, let me leave it here. There were others, but I’ve said enough already. I believe most, if not all of these, could have been avoided if there was a Continuity Director. I noticed none was mentioned in the credits (except that position is called another name I have no knowledge of). All in all thanks to Kemi Adetiba et al for the laughs;

And yes, we are always “watching”.