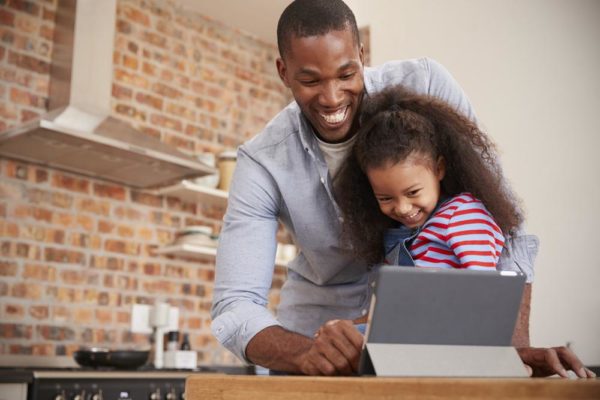 The socially accepted norm in Nigeria, is that: a man wears the trousers and provides for his family.

He is expected to engage himself in a job that takes him out of the house in the morning, and brings him home later in the day – to a wife, food on the table, and a clean house. When he starts to procreate, his wife is looked upon to cater to the children. He has no business messing with the day-to-day running of the home or even tending to the children. He cannot be the primary caregiver… that is why he has a wife.

But what happens when there is a domestic shift? He completely flips this expectation, and instead of being the cheddar-earning, suit-wearing, beer-drinking breadwinner husband or father, he becomes the cheddar-cooking, singlet-wearing, diaper-changing stay-at-home dad. Does this weaken his status as ‘the’ man?

Nigerians are raised with the notion of mothers staying at home with their children; as such, they are largely supportive of the idea. They cannot even bear the thought of a stay-at-home father. They thrive on so many misconceptions about men who chose to stay at home and play the role of “wife”. They do not understand that the socio-economics of parenting are changing, hard-charging women in demanding careers have less time for parenthood, and it seems only natural that we should be seeing more stay-at-home dads.

Here are some of the misconceptions they have about these stay-at-home dads:

He is out of a job
Why would a red-blooded male with male pride just sit at home to take care of the children, except he is has no other choice? Right?
Certainly, he must have quit a job situation that is not promising, or he was fired, and is now making the most of his time between jobs to help his wife with the children. Unfortunately, this is not always the case. Some men actually prefer to take care of the home and kids. Some even do a better job at it. They make the conscious choice to take on this ‘wife’ role, on agreement with their partners.

He is not ambitious
The assumption is that a man who would easily give up the corporate world to stay at home to raise children is not ambitious in any way. But what exactly is the definition of ambition? The fact that he is staying at home all day with the children does not mean he is whiling away time doing nothing. Playing the role of a full-time dad could be a temporary move – a necessary step in a much larger scheme.

He is not masculine
Certain jobs such as engineering, business, and driving are classified as masculine, while others including teaching, sewing, and catering are ticked off as feminine. Of course being a stay-at-home is classified as feminine as well. Who created the standards for what is masculine or feminine anyway?
There is no clear justification for this job grouping; and over the years, it has been proven that anyone can do any job really. That aside, taking care of the children and home requires a lot of mental and physical energy which a man possesses.

He is not a strong role model
There is the argument that a stay-at-home dad will not be strong role model for his child, as he will confuse the child on what a ‘proper’ man should be like. The child, if male, would probably grow up having gender identity issues – because he had a father who plays the role of a woman.
This is one of the most unfair misconception. If anything, being a stay-at-home dad shows the child that a father is one who is always there for his child, and one who caters to his child – a good example for any child.

Their wives wear the pants in the family
The misconception is that the wife is the breadwinner, therefore she has also taken on the power that comes with being the head of the family. Unfortunately, being a stay-at-home dad does not in any way imply that man becomes a weakling or he surrenders his authority as husband to his wife. He still leads the family, champions the vision, makes the necessary decisions and protects his wife when need be.

Are you a stay-at-home dad? what are some of the struggles you have had to deal with?