For the Modern Dad! 6 Reasons Why You're Hesitant About Paternity Leave 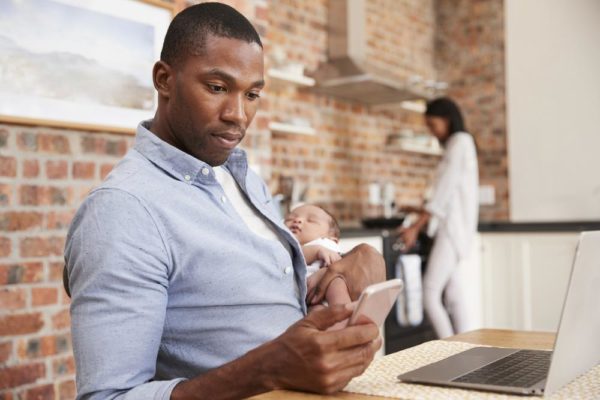 Apparently, ‘paternity leave’ is a real thing! Just like the woman who has carried a baby for 9 months or more and birthed it, allowed 3 or months paid leave from work (depending on the office policy), the man who basically just blissfully released a sperm or two at the time of insemination, is also given some time off work when the baby arrives! Paid leave! Usually, it is half as much time off as new moms get, still… waaawu!

One would think that these new fathers would rush to take the time off after the birth of their child, but they rarely do. Most will only take permission to attend the child’s naming and return to work the next day. The few who end up taking the leave, usually do not complete the time covered under the company’s policy.

The idea behind paternity leave is to give the man time to bond with their new child and be more involved in raising their children. What then could possibly be the reason behind this lack of enthusiasm in fathers when it comes to the paternity leave?

The Feeling of Emasculation
The idea of a man taking paternity leave from work to go take care of a baby evokes feelings of emasculation for some. They do not want to be regarded as the kind of man who can play wifely roles, so they are reluctant to take the opportunity of paternity leave even when it is offered. There is also the perception that making the leave would open windows which would lead to being too involved in the child’s welfare even after the leave ends and they are not interested in being that committed or involved in parenting.

Fear of Losing their Job or being Demoted
With the economic situation and scarcity of jobs, men are hesitant to take time off work, including paternity leave. There is the fear that taking the leave would be perceived as a lack of commitment, or that the firm or company would see them as unserious and thus, put them on the top of the list for layoffs. There is also the fear that whoever sits in for him while he is away would do a better job, which could lead the company to hire the new person to replace the new dad. With more mouths to feed, taking this risk is very often not a welcome idea.

Fear of Losing out on Job Opportunities
Some competitive and ambitious men find it hard to take as much as 2 weeks away from work, not even for the sake of a new baby. They would rather spend time trying to meet up Key Performance Indicators than at home doting on a baby who has a mother and possibly a nanny and/or grandma. They believe that any time spent away from work would increase that required to meet a target or deny them opportunities for office training and special assignments which could lead to promotion or being included in a big project.

The Fear of being ‘Daddy-shamed’ by Colleagues
This may sound superficial, but it is an actual issue. Dad shaming isn’t always overt, but it exists. Some men seem to believe that taking advantage of the paternity leave will damage their reputation in the office as there is the unspoken discrimination. There are those colleagues and bosses who jokingly insinuate that dads are unreliable, so they would rather pass up the leave than deal with the emotional stress that comes with going on one.

The Fear of Babies
While some men have great baby making skills, they are clueless when it comes to taking care of the baby when it eventually arrives. Some are actually terrified around babies. You are probably wondering why anyone would be scared of a baby. You would be surprised at how many men would admit to being nervous around babies for reasons such as size. They feel helpless at the thought of being unable to feed the baby, bath it or change its diapers, so this discourages them and makes them pretend like paternity leave is does not exist.

History Proves the Irrelevance
Men did not take paternity leave in the past and the children turned out quite great, what difference would taking a paternity leave now really make? Paternity leave is a relatively new practice and a large number of organizations are yet to adopt the practice. Many men who are offered the opportunity to go on paternity leave do not consider it necessary, especially if they are still entitled to their annual leave.

The Masculinist Perspective
Giving women a longer period of paid leave (usually double the period given to new dads) is considered unfair in some quarters. To them, the message is, that it is more important for mothers to spend time off than it is for fathers. So, from a masculinist point of view, it is a form of inequality and unfair to the male gender, so sitting out a paternity leave is to them, a form of protest.

Note: This article is based on the opinion of several men who have passed up paternity leave in the last 1 year.