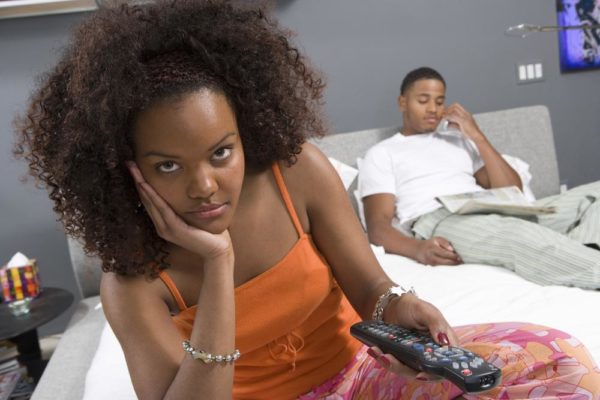 Turning on the television,  after partaking in rigorous house chores, the first station that came on was showing Telemundo. Without thinking twice, I changed the channel to watch news instead.

So why did I do that with immediate alacrity? This is a tale of once bitten, twice shy. So far, Telemundos have not been able to ‘help my condition’,  rather they made me have a false sense of the real world.

It all started when boo and I were having serious issues threatening our relationship. Ever since, it had been lovey dovey all the way, especially when we started dating. Then some months down the line, our relationship took some new twists and the arguments and quarrels started creeping in, gradually. Determined to make our relationship work,  knowing that we are two imperfect different individuals, we resorted to sorting our differences amicably without letting it linger onto the next day no matter what.

However, all hell was let loose when I saw a different side of boo that I had never seen. We had a major quarrel and for the first time, I saw him flare up. The cool, calm, collected guy I knew, was gone. He was deeply pained. I’m still trying to recollect what went wrong though,  but I do know things went out of hand.

At that point, our relationship was threatened. What did I do? It was not like I was totally at fault, but the more I tried to make him see his own faults too and see things from my own perspective, the more he became defensive and found it more offensive.

A day after, we didn’t talk. We were waiting for the first person to reach out to the other. Okay, so I sat down and thought things through, I had to swallow my pride and apologise even though I knew he had also offended me too.

I dressed up and went to visit him in his house. I had already mapped out what I was going to do and it was largely influenced by what I watched on television. Then, after watching a scene from one of the current Telemundos airing at that time,  I thought I could apply the same strategy learnt.

This is what happened. The lady in the Telemundo, who  had offended her man, was able to appease him with sex. Going to her man’s house, she was dressed to kill as she sought to make amends. The next thing she did was to try to manipulate him with tears and guess what? It worked. It didn’t end there, she walked out on him crying, saying that if he wanted her no more, she would be fine.

That is how in this Telemundo, the guy pursued her into the streets, not minding onlookers watching them stage an ‘entertaining’  drama for their view, he begged her to come back, pleading that he didn’t want her to leave his life, kneeling down and all that. With all that show of love and desire, they made up just like that and the next thing, they landed on the bed!

So I thought I could act that out with boo when we had issues. Omo, boo didn’t fall for my tears, first of all. He kept explaining and hammering on what he considered I did wrong. I left his presence in annoyance, thinking he would run after me to come back. I walked and walked on the streets expecting him to run after me like the guy in Telemundo, only to turn back to see nobody was coming after me except a corn seller,  who was running to sell corn to a customer in a moving vehicle! Just imagine? It took serious prayer and fasting, plus the intervention of our mentor for boo and I to let go and carry on.

I thought I was the only one who Telemundo affected negatively until Sunday morning, during sermon, the preacher who was speaking on relationships, said that Telemundo also ‘showed him pepper’. According to him, these television series made him have the wrong expectations and perceptions of marriage.

Having watched an episode that a couple made up by passionate love making after a serious quarrel, he thought that he could apply that to his household. Then, he was newly married,and he was so eager to have his first quarrel to experience what he saw on Telemundo. So he waited for the first fight with his wife thinking that he would just grab her and plant a kiss on her lips and from there they would move to passionate love making and forget their heated argument just like that! In fact, it was not as easy as he envisaged; their quarrel was further exacerbated, and what Telemundo painted was very far from what he experienced. It was a different ball game entirely. In fact he had to resort to other tested and proven methods of resolving conflicts to save his marriage.

With that experience, now, I belong to the class of women who would never bother spending their time watching Telemundo series. This is because of the unrealistic expectations they have created in my mind. Instead, I would engage myself watching something else educative or funny and not something that gives me a unrealistic expectation about marriage and relationships because what they act, does not happen in the real world.