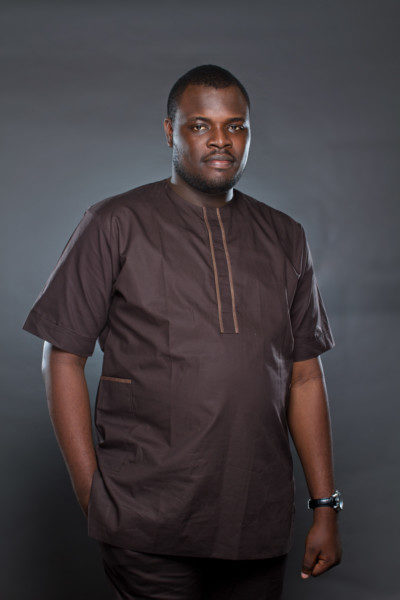 There was a lot happening in three minutes. I wondered if I was hallucinating this reality; was this Things Fall Apart inside another story, wrapped in another layer, extended, widened, the past and present co-joined, essentially the greatest story out of Nigeria retold?

I watched it again, and it was hard to miss.

The ad from Wikipedia, titled Things Come Together (which has undertaken massive cross-continent promotion, for reasons not entirely clear) and produced by the digital agency, Anakle was a modern take on the Achebe classic and it featured a slice of the text’s central narrative: a clash of civilisations.

Except in this case, Okonkwo and with him his village, Umuofia were not exactly clashing with the West. Instead, they had learnt a higher skill – amused, necessary co-operation; even acceptance.

A teacher addresses the elders of the village and others in an open-air class. He throws at them a couple of questions, that they quickly deploy as a tool to emphasise the beauty of their traditions, including the allure of polytheism (incidentally the only strain of global religion that doesn’t find the need to kill unbelievers as far as recent history can show us).

Okonkwo sits quietly as others discuss knowledge that is closed to him. But unlike the irascible, if entirely empathetic subject of the original book, this Okonkwo is neither threatened nor offended by the new world he is forced to confront. He is at peace: collected, and centered. And after the class, he is curious only about one thing: how did his colleague know so much about the world?

This Okonkwo wants to know about that world beyond his village. Not enough to avoid mocking the white man’s god that cannot tell tomorrow, but enough that it makes you wonder: is this Okonkwo a stand in for his country?

Is this story telling us a story within a story? Is this gorgeously choreographed presentation – delicious shots colliding into each other, screenplay delicately delivered in a heady mix of impeccable British English and the delightful Igbo intonation, and a palette of well blended colours at the background keeping you locked in – presented as a harmless ad, trying to do a lot more?

Should the leaders of our independence, but even more to the point, the impetuous soldiers of a 1966 coup we have yet to recover from have waited, listened, and asked more questions? Is this a metaphor for what we could have done; for what we could do better?

Is it a coincidence that, at a time the Igbo aspiration is once again centre of the national conversation, no less on the 50th anniversary of a civil war we have yet to address, these minds sculpted and presented to Nigeria’s digital generation a glorious Igbo story warts and all, with storytelling effective enough to take off the sharp edges while retaining truth’s punch?

Is it a mistake that we find women, while still sadly silent, filing out from the shadows in the remaking of a classic Nigerian tale from which they were sadly invisible?

This short film didn’t tell a harmless tale, no. It told a very deliberate, powerful Nigerian story. And for me, akin to finding a beautiful stream of water in the desert of Nigerian non-contemplation.

We are a nation that yet argues whether we should remind ourselves of our Civil War, in a world where the holocaust is a never ending cautionary tale, where Rwanda bemoans its genocide yearly in its continuing journey to legendary African success story, and where apartheid is forever background of the modern South Africa.

But we don’t do contemplation in Nigeria. We don’t do reflection. And we certainly don’t do the poetry of soul.

We don’t peel back our stories, seeking for the layers of meaning and possibilities. We don’t look our reality in the face. No. We flatten our experience, we dismiss our own nuance and then in effect, we demean our own humanity.

Cursed with a leadership incapable of contemplation, we have responded – understandably – with a culture that doesn’t reflect. Nigerians walk everyday as if (like my friend the TV host, Lamide Akintobi has told me) we suffer a peculiar Post Traumatic Stress Disorder… simply of being Nigerian. A disorder we will not engage, we will not deal, we refuse to heal.

Pray, do Nigerians even believe in our own humanity?

Think of the fact that we don’t have a central organizing piece of culture that captures the sweep of our many arcs of history. Do you know of any nationally acclaimed biopic of one Nigerian leader – Nnamdi Azikiwe, Obafemi Awolowo, Aminu Kano, Moshood Abiola, Funmilayo Ransome Kuti, even the legend of Moremi?

When Half of a Yellow Sun arrived, stunted regulators panicked and attacked it. When a civil war story came in the movie ’76, it was so insipid; bloodless with political correction it was not worth mental engagement.

It is almost as if the Nigeria condemns herself as incapable of depth, incapable of width, and undeserving of beauty.

Societies understand, engage and deepen their humanity through stories – books, films, theatre, television. The best of the cultural shelves of nations compete to tackle its biggest stories, its brightest themes, its beautiful contradictions.

Storytelling through iconic ads have also been a fixture of evolved societies, even through ads: Chysler with its 2011 Super Bowl ad defiantly declaring the survival of the American entrepreneurial spirit; its 2012 Clint Eastwood 2-minute classic as the nation dug its way out of the Great Recession; India’s Ariel #ShareTheLoad campaign that spoke to a pivotal moment in the culture, for the rights of the nation’s women, and the rebalancing of gender roles.

Not here, in this nation without a theme song.

Here, we insist on caricature. All the death in our movies come with screaming protagonists, all the humour is slapstick, all the tragedy is skin deep. Is this not a humanity debased?

Have you asked yourself why the only movies that succeed here are one-dimensional comedies? Why the gorgeous 93 Days – an exercise in perfection, if anything – telling the story of Nigeria’s Ebola victory got only a passing nod as we moved on to the next inane bit of political nonsense?

Where are the stories that push our audiences to think, to feel, to become?

So forgive me as I stood, briefly refreshed, by the layers of this simple work of beauty. And forgive me for feeling immediately sad – almost regretful – that, beyond the ‘oohs’ and ‘aahs’ for the glimpses of Pete Edochie, our national treasure, the beauty of this work of art will be lost on all of us, together, as we lurch towards the latest piece of it-doesn’t-make-any-sense straight from the crooked pen of Femi Adesina.

It has become easier for us to laugh at the extremities of our national conundrum, than to reckon with its central narratives.

This metaphor from Anakle will bring it glory, as it should. But it may yet miss its most important mark – the capture of a nation’s heart, and then its soul.

After all said, done, and edited, it appears we will yet continue our steady march into a soulless red sea.