Goga Clay: Banged Up in Kenya 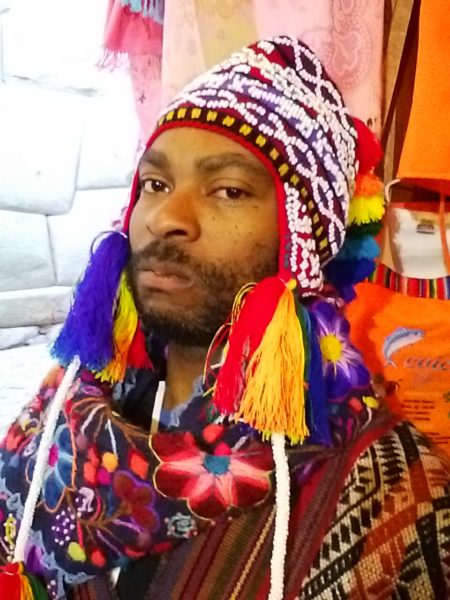 This story is based on real events. So help me God.

Well, it happened. After near misses, I finally got in trouble. In real trouble. Now, before you judge me, I didn’t do anything wrong. My only crime: traveling while black.

I arrived in Nairobi from Kigali, Rwanda, as a happy traveling backpacker. Emphasis on the word ‘happy’, because ever since I decided to leave the corporate world and travel, ‘happy’ is what best describes me. {I wrote about it here} Anyway, this new state of happy was recently severely tested.

Upon arrival in Nairobi, I was quickly detained in a holding cell at the airport. Apparently, I fit the profile of a “high risk traveler”. I had recently traveled to Cuba, Guatemala, Colombia, Panama, and Brazil. This, coupled with the fact that I am a young black man traveling alone, who also happens to be Nigerian, was basically my undoing. It probably didn’t help that I looked the way I did: slightly unkempt, henley shirt, hiking pants, hiking boots, and the coup de grace….a backpack!

You are probably thinking that backpacking the globe is not a crime, and I agree with you. However, apparently, to some Africans, specifically the Kenyan immigration authorities, this is something only white people do. My reward for not knowing my place as a black man? A two and a half day stay in a cell without food or water.

I did what I do at every border/airport, I smiled and said “sir” or “ma’am” at the end of every sentence. I presented my smile and travel documents to the immigration official who greeted me, but was promptly pulled to the side and asked why I came to Kenya and what I intended to do whilst in Nairobi. As I started to answer the question, I was asked to go see another official who questioned me about a stamp and visa on my passport. Again, when I tried to answer the question, I was invited into their office.

The gentleman who was given my passport engaged his female colleague in a discussion in Swahili. After about two minutes of listening to two people speak about me in a language I didn’t understand, with them throwing me looks of disapproval, I was informed by the lady that I would not be allowed into Kenya because of a stamp I received in Paris. I was surprised, but collected myself in time to ask what exactly they didn’t like. I explained that I had traveled round the world, including Europe, since receiving that stamp and that no one ever had a problem with it or me. My question and explanation didn’t seem well received, because my travel documents were confiscated and I was then ordered to sit down and “shut up”.

After a few minutes, I decide I am going to find out what is happening. I raise my hand and after a nod of approval from the lady, I approach her desk and ask politely why I was being held and if I could address any questions or concerns they had (I learnt the latter from my past life as a management consultant). She explains calmly that I would not be allowed into the country; that as immigration personnel, they have every right to refuse me entry into Kenya. My response is that while it is their prerogative to deny me entry, I also have the right to know their reason.  This last statement is met with blank stares and another order to go back to my seat.

After about fifteen minutes of sitting quietly, another lady arrives and asks me to follow her. I follow, and ask where we are going. Again, no response. After a few minutes of walking, she opens a door and asks me to wait inside while they sort out my case. I comply because I know what immigration officials have the power to do. After stepping in, I realize that I’m in a holding cell. The door closes and locks behind me.

At this point, it is a bit funny to me because I’m thinking someone has made a terrible mistake, but I’ll sit in this holding cell for an hour or two, then would be released and perhaps apologized to. I take out my phone and call my cousin to inform her of the situation. She, in turn, informs my uncle, and within minutes she’s on her way to the airport with a lawyer. I don’t panic, if anything, I’m excited; I get to spend a couple of hours in a foreign holding cell!

In the cell, I befriend a Somali who has been held there for just over a week. I try to get information on why he is being held, but after mumbling something incoherent, he gives me a blank stare. I quickly realize he is not going to tell me more. This would happen often; I ask a cell mate why they are being held, they mumble something incoherent, I ask a follow up question, and they look straight at me or at the wall with an expressionless look.

Two hours go by before my cousin calls to tell me that she and the lawyer are at the airport. A few minutes later, my handler informs me that someone is here to assist me. I’m excited that finally I would be out of this place, but upon getting back to their office, I realize that neither my cousin nor the lawyer is there. Instead, I am ordered to walk with three people, an airline staff, and two (man and woman) immigration officers. They refuse to inform me where we are going, so I take out my phone and call my cousin.

She informs me that she and the lawyer are being denied entry to see me. I tell her and the lawyer that I’m being led somewhere without any information. Over the phone, I decide to narrate to them, everything that happens. When it becomes clear that I am being ushered unto a plane, the lawyer confirms that they don’t have the right to force me unto a plane, especially with no word on where I will be going.

Frustrated with my refusal to go any further, one of the officials, a man, starts shoving me. I tell them I know my rights and then I make a stand at the gate area; this infuriates them even more, to the point where the man shoves me to the floor, and whilst on the floor, the woman hits me on the head. It is here that she starts to yell out less than complimentary things about Nigerians.

After the stand off, I am led back to my holding cell. Thinking to myself that the lawyer would be able to see me and we would sort out this mess, I feel some satisfaction. Little did I know what awaited me.

Moments after being thrown back in the cell, three men and the lady who hit me on the head come back into the room and ask for my phone, after my protests, they tell me it is Kenyan policy; better them than the police, they tell me. They also make me empty all my belongings unto the floor. Along with my phone, they seize my laptop and DSLR camera. Now I can’t reach my family, I start to panic.

It is now 7:30pm and I’ve been held since I arrived at 10:30am; still no food or water. I have been interrogated twice now and still no information on why I am being held. The door opens and a few more travelers are ushered in, among them is a Somali American who has been there for weeks, in another room I am told. Let’s call him Ali (not his real name obviously). Ali and I bond over our “Americanness”. We exchange stories about life in The States. I ask Ali, how as an American citizen, this could happen. “Why are you here?” I ask. The same thing happens; a mumbled answer, my follow up, and a blank stare. I can’t help but smile.

We all get to know each other, and though we introduce ourselves by name, we all call each other brother. I should say, “brazer”.

I notice that Ali is very kind, especially with words of encouragement. Another thing about Ali? He has a phone! Not only does he have a phone, but we can all use it. My excitement is cut short when my handlers come back in to pull me out for yet another interrogation, but this time, it would be the most unpleasant.

As I sit across from the woman who would “have a chat” with me, I wonder if I’m seeing correctly when I see that the ID hanging from her neck has the words “Counter Terrorism Unit”. What in the world would they want with me? I wonder. After about ten minutes of the worst silence I have ever experienced, three other men walk in and the “chat” begins.

Watch out for Part II
If you’ve ever experienced a similar experience, please share your stories in the comments section.

Men Who Can Cook Are Just Better