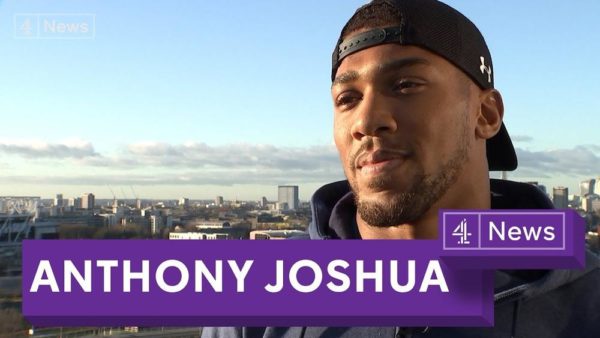 World heavyweight champion Anthony Joshua has revealed his interest in politics in an interview with Channel 4 News.

Joshua, who hopes to add the WBO belt to his WBA, IBF and IBO belts by defeating Joseph Parker in Cardiff on March 31, has said he does have an interest in politics, and while he does not think he can run the country, he thinks he could have a say. He said:

I do have a voice but remember I sacrificed education to follow a sporting career.

Because I didn’t go to school I didn’t educate myself, I haven’t been in a classroom, and I’ve been out on the streets with people every day since I was young.

I think that the county’s moving at such a rapid pace that some people that are older have been in power do need young creative minds to kind of influence what is happening in the world and world matters – I do believe that.

Joshua was also asked about the coming Russia 2018 World Cup, the interviewer asking who he’d like to win between England and Nigeria. See his reply below:

BN TV: What are you bringing to the Table? WATCH this Episode of New Vlog Series “Lolo Speaks”