Moremi Elekwachi: How to Give Your Girlfriend Assurance When You Have Multiple Baby Mamas 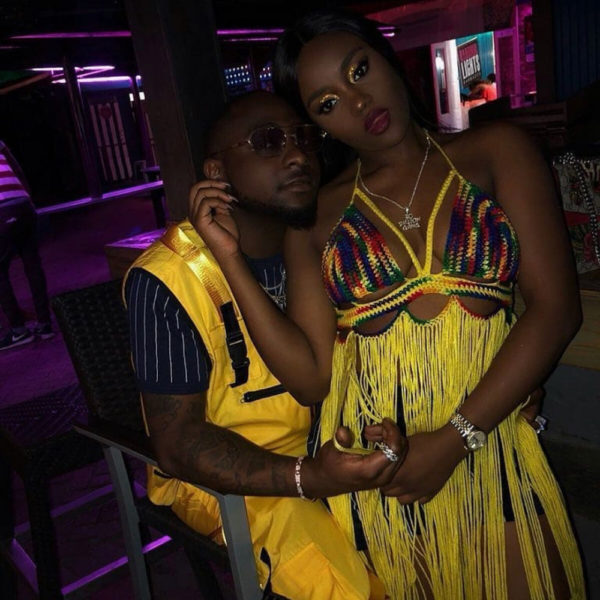 By now I’m sure you have seen all the adorable photos and videos of Davido and his new bae, Chioma, all loved up in the club, as he declared his love for her by dropping his hot new song, “Assurance,” which is dedicated to her. {Click here, if you missed it}

This move Davido has made, has got his fans in a frenzy. Because duh! when you publicly declare your love for someone it’s a freaging big deal. Especially when you are a guy like Davido – one of Africa’s most popular entertainers who could pretty much have any girl he wants.

If you’ve been following conversations on the Internet, you would have noticed that apart from people commenting about how awesome the song is, most have also been expressing their heartfelt sadness for his baby mamas, Sophie and Amanda, who both have beautiful children for him. On the other hand, many are empathizing with Amanda and Sophia, others are congratulating Chioma for successfully snagging one of Africa’s most popular artists.

But the question people aren’t asking, is how exactly can someone like “Davido” really give the new love of his life assurance that he will always respect, love, and protect her? Judging from the lyrics of “Assurance,” some of the ways he plans to do this are as follows (hope these are the correct lyrics sha. I asked Google.

So I am looking for a sister
Chioma my lover
She get the dollar (Dollar)
She dey wear designer…
Love is sweet o
When money enter, love is sweeter
Pepper rest o, so brother man go gat the liver
Call Anita o, tell am make she come dey go far away, far away
Me I no dey do again
She enter Atlanta, she go cause disaster…

So in a nutshell, he’s promising to shower her with love, money, designer apparel, travel, and cutting off relationships with previous love interests.

But is it really enough? I guess it depends on the kind of woman you are and what your expectations are.

So how do you really give your boo assurance when you’ve got baby mamas who have your children in the picture? Well, I don’t know, given the fact that I have no firsthand experience in matters like these. But there are some professional baby daddies who are quite famous, who do.

Maybe Davido could take a few notes from the models they have adopted:

Diddy: The “One Big Happy Family” Model
The business mogul and former rapper is blessed with 6 children, 3 baby mamas and gorgeous model girlfriend, Cassie Ventura. If I remember correctly, in the beginning stages, there were lots of issues with this blended family. But Diddy somehow found a way to get everyone to get along. But how did he do it? Through genuine friendships with them. He once told People Magazine:
“I met all of them [my baby mamas] in the same year, so I’ve known all of them in the same amount of time — but we were friends. Then I would get my heart broken and then my friend would be there, and I would fall in love with my friend, and then I would get my heart broken..I’ve been truly blessed to have some great, incredible relationships that have afforded me these children by these very strong, intelligent, beautiful black women…The mothers of my children are my best friends. My hat goes off to them…”

Apparently, Cassie is also good friends with Diddy’s baby mamas and even hangs out with them.
So yeah, if Davido could adopt this model of baby fatherhood, it’s very possible that him, Chioma, Amanda, and Sophie could all just be one big happy family.

Tuface Idibia: The “Put a ring on it” Model
When Tuface married Annie after all the previous baby mama drama, we were all ecstatic! Right? Because marriage is supposed to be the ultimate “Assurance” of a serious commitment. Taking vows before God and man to love someone for better or for worse and to forsake all others is no joke! Although there have been one or two controversies in their marriage, true love has indeed conquered all.

Will Davido be giving Chioma this ultimate Assurance of marriage anytime soon? Well, we’ll just have to wait and see won’t we?

Wizkid: The “Full Disclosure” Model
There’s nothing more refreshing than a guy who is totally honest! Like, “dude tell me what the deal is, and I’ll decide whether I want to stay or not.” BRAVO! In this full disclosure model, Wizkid gives his baby mamas and girlfriends an “Assurance” of honesty: being frank that he has relationships with multiple women.

During a recent interview, he disclosed that he has several girlfriends, and they all know about each other. He also emphasized that he won’t be getting married anytime soon.

From the looks of things though, Davido is so crazy about Chioma that he won’t be acquiring any other girlfriend anytime soon…but just in case he decides to, it would be advisable to be totally honest about it. Honesty is a sign of respect for the one you love, as Wizkid has clearly shown.

***
Whichever model Davido chooses, I’m rooting for him and Chioma! They are so cute together.

Ask Shade About Trusts: My Daughter’s Husband is a Moocher! How Do I Protect Her Inheritance?