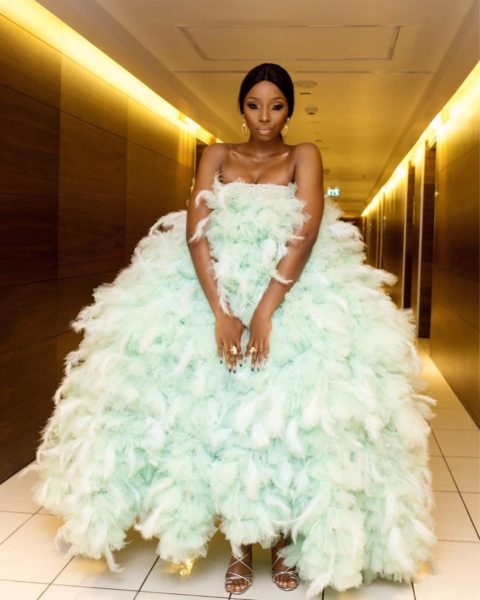 Because I hardly watch television, I could not watch much of this year’s Big Brother Naija. Besides learning the names of the contestant, I saw that everyone seemed to hate Cee-C. They said Miracle was amazing. There was talk about Ifu.

Aside Cee-C, there was another housemate who caught my attention: BamBam. I felt and still feel she had potentials. I was over the moon when I saw her in Falz’s latest music video Child of the World. This, to me, was an indication that she was meeting the right people and putting herself out there.

The morning after the African Magic Viewers’ Choice Award (AMVCA), I saw pictures from the event. There were different beautiful dresses by Nigerian fashion designers on Twitter. It was truly heart-warming. It is not as though we are not immensely talented in Nigeria: we lack a conducive and enabling environment where people can explore and express their talents to the fullest. I saw BamBam’s dress and my first thought was, “This is edgy and different.”

I was stunned when I went through my Twitter timeline few hours later to find people were ripping BamBam’s dress apart. I was shocfused. Lady Gaga has worn something similar to BamBam’s AMVCA dress. Everyone seemed to adore it. It crossed my mind that Rihanna could have worn the same dress, and as usual, we all would slather accolades on the dress. Why was it different with BamBam?

Lady Gaga and Bambam, who wore it better?

First, The Average Nigerian lacks his/her own mind. (Explaining this with Nietzsche’s “Beyond Good and Evil” is so tempting.) We have many people who are not willing to process ideas for themselves. How else can we explain most Nigerians cling to religion at the expense of human rights in 2018? I can wager that a sizable number of those people hating on the dress do not have a reason to hate it. But as their favourite social media influencer has dragged the dress through filth, they are willing to join in the jamboree.

Secondly, I do not think The Average Nigerians have forgiven BamBam for fornicating on live television. How dare she disregard our social norms and express her sexuality with such blatancy? Average Nigerians froth at the mouth when they see a single woman embodying happiness while living her best life. They would rather you sand-paper yourself so they can easily hold you in their palms. Was she having sex alone? What did they say about her “accomplice”?

Thirdly, they said she was fake the same way they said T-Boss was fake. The Average Nigerian (TAN) is not used to people being collected and composed. How dare you live in a place and Nigeria and still exude grace and serenity? Why are you not a razzite*? You must be pretending-o. When you mind your business, smell good, and look good, The Average Nigerian would say you are haughty, even though it is not your fault they have a low self-esteem.

In addition, The Average Nigerian is angry. People who live in a country with a trashy economy are angry (depressed) or frustrated, or both. As Freud wrote, “Depression is anger turned inward.” For the masses who are angry, they cannot channel their anger at the people who deserve it. In turn, we see them picking on people who are systematically disadvantaged. It is no surprise that Third-World Countries are highly homophobic and misogynistic. Nigerians want to march towards Aso Rock and demand justice, but as we cannot, we are angry with people who are not hurting us.

BamBam’s dress was not the worst of the dresses at the AMVCA, neither was it the best of the dresses. It was different. It was daring. It was pretty. The colour complimented her complexion. Her hair was well done. She had a pretty smile, as usual. Her dress is not the reason for us having an unfortunate economy: it is not hurting us. Would it not be better to direct our anger at the people who have decided to wreck our economy by viciously stealing from us?

P.S. Cee-C’s dress was gorgeous! Plot twist: some people said her dress was ugly because Cee-C has a bad personality. This is all shades of hilarious. Have they met the woman? Did you know: Although you have a personality, you behave differently based on the social context? If you are in the same house with people who annoy you, you are bound to act out. “We see people as we are, not the way they are.” I should also add that the difference between aggression and assertiveness is sex: from a man, it is assertiveness. When the same act comes from a woman, it is aggression.

Beyond the Three: Kada Takes Us Into the Cultural Experience of the Bwatiye People