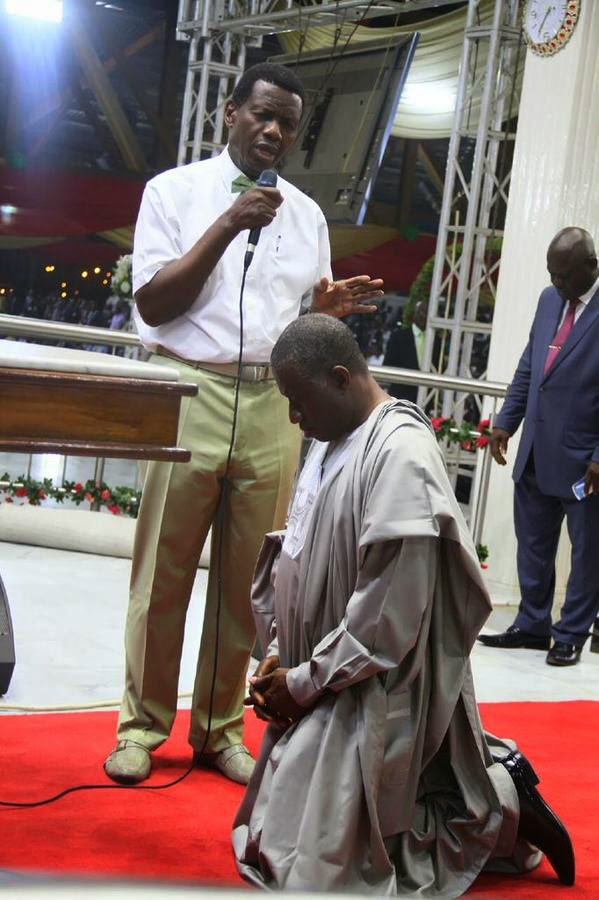 Picture your Ijaw president, draped in grey agbada, his signature bowler missing atop his head, because, well, he’s in the house of God. He’s kneeling, a whole president, the president of the most populous black nation, leader of 180 million people. Towering above him is your favourite Nigerian pastor, a button-down short-sleeve shirt, white, paired with khaki pants. There’s a bowtie somewhere there, too. Maybe in saner climes, this would be a big laugh. But, this is Nigeria.

That wasn’t the first time Goodluck Jonathan was kneeling before Pastor Adeboye. He was president, too, the first time, and was also seeking a reelection. I remember, vividly, a family member, who was at the Redemption Camp on that day, telling me this was the reason they voted for GEJ – a testament to the power Nigerian pastors wield.

Politicians, knowing just how much hold Nigerian pastors have over their flock; they have learned to manipulate it. President Muhammadu Buhari‘s running mate, Yemi Osinbajo, is an RCCG pastor. Away from the country for over 3 months on a “medical vacation,” and out of favour from Nigerians, Buhari invited Adeboye over to London. Begging forgiveness from his former boss, Olusegun Obasanjo, the People’s Democratic Party’s (PDP) presidential candidate Atiku Abubakar took along with him, Bishop Oyedepo.

But it seems Nigerian pastors, too, now aware of their power, have decided to begin to use it to their advantage. Except, my god, the manners in which they put it to use defy satire.

Two pastors trended recently and one of them is your favourite pastor who, during a bazaar service held by his Adoration Ministry, demanded that a presidential aspirant and his running mate donate something to his church before he endorses them. Father Mbaka literally asked for a bribe and his congregation cheered on.

An obviously embarrassed Peter Obi watched as Mbaka told him he and his running mate’s presidential campaign would “end in shame” because “God hates stinginess.” And his congregation cheered as Buhari’s representative, Hope Uzodinma, promised to “complete” a “first-class medical centre” in the church premises in under two months.

Afterward, Kano State Governor, Umar Ganduje, a man caught taking a bribe on camera, donated to the Adoration Ministry to cheers from Mbaka’s congregation. It would have seemed far-fetched if one had written it in a novel. But just look at God!

The other one, literally, defies satire. Bishop Oyedepo, before his tens of thousands of congregants, read aloud parts of a satirical article titled “Buhari’s Double” written by Olatunji Dare for The Nation.

“If the president will not address the nation on a subject as sensitive as this, it must have been proved beyond any iota of doubt that maybe he is not our president,” Oyedepo said of a satirical article. Like the Grammy-nominated musician, Seun Kuti, said, your favourite pastor, a chancellor of one of the leading universities in Nigeria, understands not what satire is.

Oyedepo, commenting on what he’d just read, asked: “The question is, has Nigeria now become a population of fools?”

Banke Ajagunna: Are Interior Designers Only for Wealthy People?